Use this handy recipe from The Broadsheet Italian Cookbook, and dinner can be on the table in less than 15 minutes. 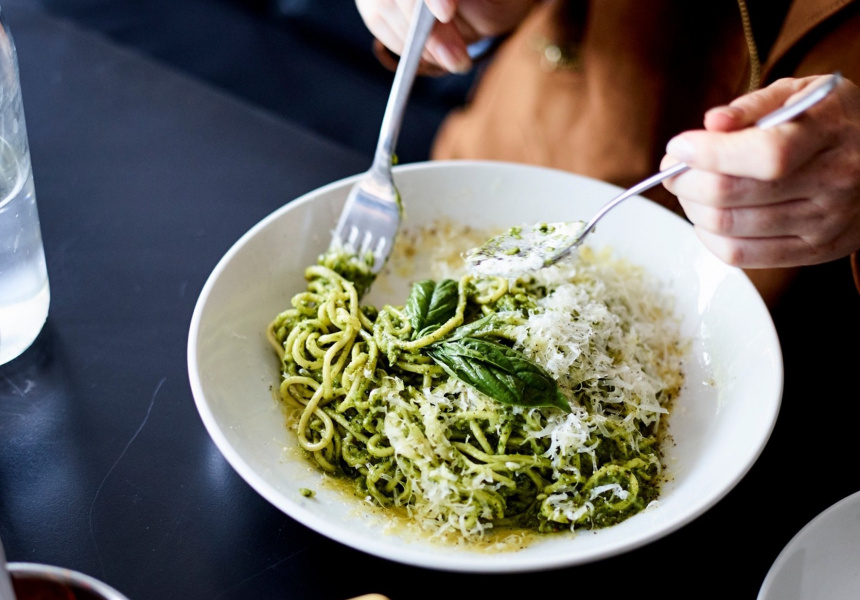 Ryan Bookless and Tania Nicolo’s three kids – aged two, six and nine – have been a big influence on their Perth restaurant, Monsterella. They’re even responsible for the name.

“When Mila was two, which was a few years ago now, she used to think all cheese was mozzarella,” Nicolo says. “But she couldn’t say that, so she used to ask for monsterella instead.”

Every neighbourhood needs a place like this, where young parents can kick back with woodfired pizza and BYO wine while their kids colour in the provided menus and pizza boxes.

Nicolo came up with this healthier pesto recipe to get some greens and good fats into the kids. Bonus: if you use dried spaghetti (which we have here, rather than use the labour-intensive fresh pasta recipe included in the book), dinner can be on the table in less than 15 minutes. “It’s so easy,” Nicolo says. You just whack everything in the food processor.”

Spaghetti with Spinach and Macadamia Pesto, by Tania Nicolo

To make the pesto, blitz the basil, spinach, macadamias, cavolo nero (optional), half the oil and a large pinch of salt in a food processor. You can make it as smooth or as chunky as you like. Add the rest of the oil and some freshly cracked pepper. Place the blended mixture in a bowl and stir in the cheese. Season to taste.

Bring a pot of salted water to boil and cook the pasta until al dente. Drain and reserve a cup of the cooking water.

In a large frying pan, warm half the pesto with some oil. Add the spaghetti, the rest of the pesto and as much cooking water as you like. Toss gently, transfer to bowls or plates and top with grated Grana Padano, cracked pepper and basil.