Make a few extra of these golden, panko-crumbed pucks – you’ll need them. 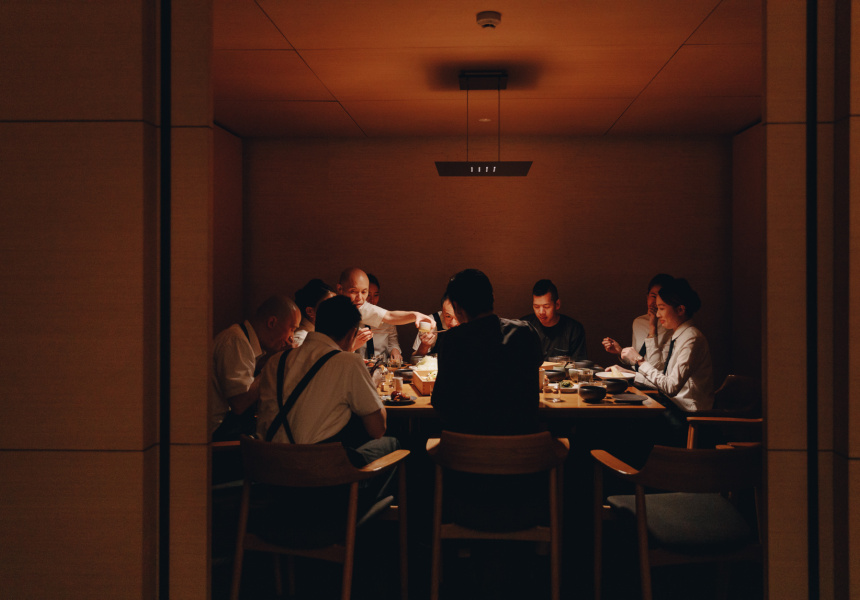 Broadsheet photographer Jake Roden is a bit incredulous as he inspects the dinner laid out for the staff at Melbourne’s Minamishima. He’s been on assignments like this before, and he thinks this one might be staged for our benefit.

His suspicions aren’t totally misplaced. The spread is impressive, to say the least.

Chef Brendan Liew has prepared golden fried korokke (croquettes) made from A5 Wagyu offcuts, served with shredded cabbage, Kewpie mayonnaise and his own demi-glace sauce [jump to recipe below]. Liew, the only non-Japanese chef at Minamishima, spent time in Tokyo and says he based the dish on the deep-fried offerings you find in Japanese butchers. “It’s something Japanese people grow up with,” he says.

At the sushi counter, owner Koichi Minamishima and executive chef Yoshiki Tano stand side-by-side. They’re solemnly assembling tonight’s other main dish, chirashizushi (sushi “scatterings” of southern blue fin tuna, octopus, King George whiting and Hokkaido scallops), on a bed of nori-seasoned rice. Minamishima says they save “the good parts” of the seafood for customers. Sure, but you’d never dare refer to his chirashizushi as “offcuts”.

It’s true that a staff meal at Minamishima can be as simple as ramen or pasta – usually seafood-based. But looking at tonight’s meal I’m not as convinced as our photographer that it’s a performance. They’ve pulled out all the stops, no doubt. But, having lived in Japan, I’ve seen stops like this before, many times. Media or not, this is a quintessential Japanese scene.

Minamishima and Tano couldn’t be more different at dinner. As everyone gathers around the large 12-person American oak table, Tano resumes the place that’s clearly the head. Liew, tonight’s young croquette chef, sits to his side, looking a little nervous as everyone claps their hands and yells out the customary itadakimasu (similar to “bon appetit”) before tucking into his dish.

Minamishima, meanwhile, sits off to the side quietly engrossed in his meal as his staff chats away in Japanese. Towards the end of dinner, he catches my attention from across the table and, with a shy voice and gentle accent, asks me what I ate for lunch today. A sandwich, I tell him. After finishing his meal, Minamishima sneaks away just as discreetly. I’m told he has gone out the back to brush his teeth – something he always does before a service.

This recipe must be started 1 day in advance.

To make the demi-glace sauce, roast the beef bones and veal trimmings in a hot oven until deeply browned. Meanwhile, coat the vegetables in tomato paste and roast in a separate tray until browned.

Drain excess fat off the meat and place in a large stockpot with the roasted vegetables. Place the empty tray on the stove, add the red wine and cook gently, scraping up browned bits. Cook until wine has reduced to a glaze, then add to the pot.

Add enough water to cover all ingredients. Simmer for 8 hours, regularly skimming the foam off during the first hour. Strain, discard solids and return the liquid to the heat. Simmer until reduced by half. Season with salt, pepper and soy sauce to taste. Makes approximately 1L but can be frozen. Refrigerate until needed.

To make the croquettes, place the potatoes in a pot and cover with plenty of salted water. Bring to the boil and cook for 15 minutes, or until the tip of a knife pierces the potato with ease.

Meanwhile, heat 2 tbsps of oil in a large frypan and gently fry the Wagyu, shiitake, onion and carrot. Cook until onion is soft, making sure it doesn’t colour. Add the sugar, sake and soy, bring to the boil and simmer for 10 minutes to melt the sugar and allow everything to infuse. Taste and add more soy, salt or sugar as required. It should be very strongly flavoured at this point.

Drain the potatoes and stand for 5 minutes to steam off excess moisture. Transfer to a large bowl and mash lightly to create a homogeneous mixture while retaining large chunks of potato. Add beef mixture and use a spatula to gently fold through the potato, making sure not to break the chunks too much. Spread on a tray and allow to cool to room temperature.

Prepare a tray lined with baking paper. With gloved or slightly wet hands, shape the mixture into 70g ovals and place on the tray. Do not stack because they’ll stick together. Cover and refrigerate for a few hours, or overnight, to firm up.

Prepare 4 trays or bowls to crumb the croquettes. In the first, place the flour. In the second, the egg. The third, the Panko. Line the final tray with baking paper for the completed crumbed croquettes. Crumb the croquettes by first coating them in the flour, then the beaten egg, followed by the Panko, shaking off the excess after each coat. The croquettes at this point can be frozen for up to 1 month.

Heat oil to 180°C in a large saucepan or deep-fryer. Deep fry croquettes for 3 minutes or until a skewer inserted into the centre comes out hot. Drain thoroughly and serve with lots of shredded cabbage, the warmed demi-glace sauce and Japanese mayonnaise.