These boiled (not steamed) pillowy pleated parcels are perfect for your next dinner party. Karena Armstrong’s dumplings have been famous since they first appeared on the menu of her McLaren Vale restaurant, The Salopian Inn, in 2013.

The South Australian chef “fell in love” with the pillowy morsels while working under Kylie Kwong at Billy Kwong in Sydney, and they’ve since become a signature dish on her own menu.

“Dumplings bring joy to those who make them and the crowds who get to devour them,” says Armstrong, who’s also worked at Icebergs in Sydney and The Lake House in Victoria. We wholeheartedly agree.

This variation is filled with pork mince (Armstrong currently uses meat from SA producer Beachport Berkshires) and kimchi (cabbage or radish), and served with a fiery, garlicky soy-and-vinegar dipping sauce. “Ask your butcher to make sure the mince is about 20 per cent fat,” advises Armstrong. “Minced belly is a good ratio of fat to meat.”

She makes the wrappers from scratch in her restaurant, but recommends store-bought for beginners. “Chinatown has a great selection, but we buy the [Adelaide-produced] Tong Phat round wrappers to use for this style of boiled or soup dumplings.”

“If you want to steam the dumplings you must make your own pastry,” she adds. “Start with a small amount of filling and get your rhythm, and then as you speed up add more filling. A pillow-like dumpling is the goal.”

Place the pork mince into a bowl and chill in the fridge.

Finely chop the kimchi. Finely slice the spring onions. Peel and grate the ginger finely (a microplane is helpful).

Bring the pork out of the fridge and add the ginger and kimchi. Then add the sesame, soy, mushroom soy, pepper and sugar. With clean hands, mix the pork mince mixture until it’s very sticky, about 5 minutes. Put the mix back in the fridge.

The dumplings can be frozen at this stage or left in the fridge for up to 2 days in a well-sealed container.

To cook the dumplings, bring a large pot of water to the boil and simmer the dumplings for 3–4 minutes. Serve with lashings of dressing and a sprinkle of sea salt. 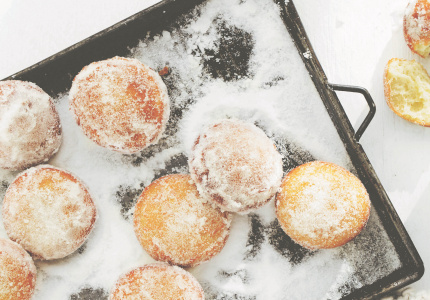 Recipe: In Italy, These Fluffy Bomboloncini, or Doughnut Holes, Are Considered the Perfect Morning Mouthful