From the former Dauphiné region in south-eastern France, this easy-to-master dish is cheesy, packed with floury potato and seasoned to perfection. It’s one of 21 dishes made by the chef in a bite-sized show exploring French cuisines, screening just ahead of the Tour de France. 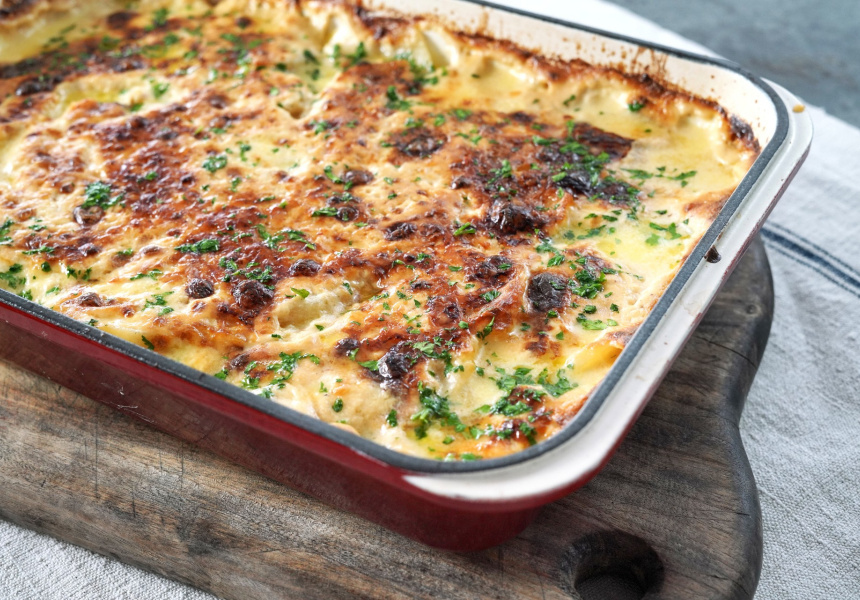 “In Europe, the Tour de France is at the height of summer, but here it is a winter sport. So this year I am inspired to make you the most heartwarming French cuisine,” says French-Australian chef Guillaume Brahimi, host of the returning SBS miniseries Plat du Tour – a snackable TV show featuring dishes from the regions of France, from Brittany’s crepes to Mayenne apples served with crisp pork belly.

“So much French food is about comfort: rich sauces, soups and stews, and decadent desserts with plenty of cream and butter,” says Brahimi. His gratin dauphinois is a celebration of the humble spud in reference to the mountainous Auvergne-Rhônes-Alpes region. Unable to travel to France right now, Brahimi visits the NSW Southern Highlands to select the perfect potatoes for his episode. For the recipe below, he recommends desiree potatoes for their floury texture.

The French dish uses sliced spuds baked in milk and cream. Brahimi dials up the creaminess with a generous serve of Gruyere, which is also used to top the creamy mixture to create a bubbling, golden brown crust. “This is French comfort food at its best,” he says.

You can catch the four-minute episodes each night of the Tour de France on SBS, from June 26. It’s an earlier Tour than usual, to accommodate the cycling events in this year’s Tokyo Olympics.

Using a mandolin or sharp knife, cut the potatoes into 2-millimetre-thick slices.

Bring milk and cream to the boil in a large saucepan over medium heat. Add potato and two-thirds of the Gruyere. Season with salt, pepper and a pinch of grated nutmeg. Stir to combine.

Reduce the heat to low. Cook for 15 minutes, stirring occasionally until the potato is tender and the cheese is melted.

Rub the inside of a 1.5-litre baking dish with cut garlic clove. Pour in the potato mixture and sprinkle the remaining Gruyere over the top.

Bake for 40 minutes or until the potato is cooked through and the top is golden brown.

Sprinkle with parsley to serve.

This article was updated on June 30 to remove butter from the ingredients list.