Produced by Broadsheet in Partnership with Castello Cheese.

A fried choux pastry that happily plays host to any number of glazes or toppings (whether sweet or savoury). In partnership with Castello, Holy Sugar founder Audrey Allard shares her recipe for a honey-glazed French cruller stacked with creamy blue cheese and sliced pear. 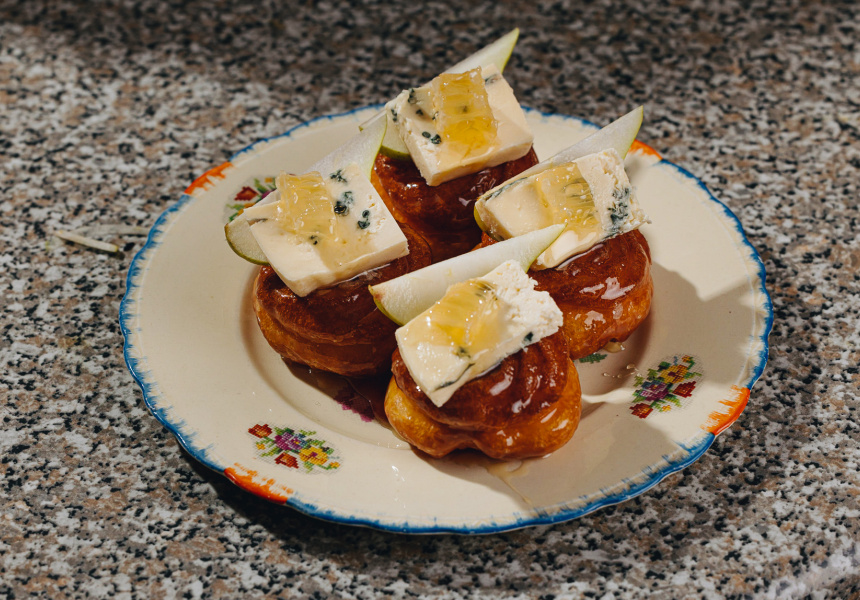 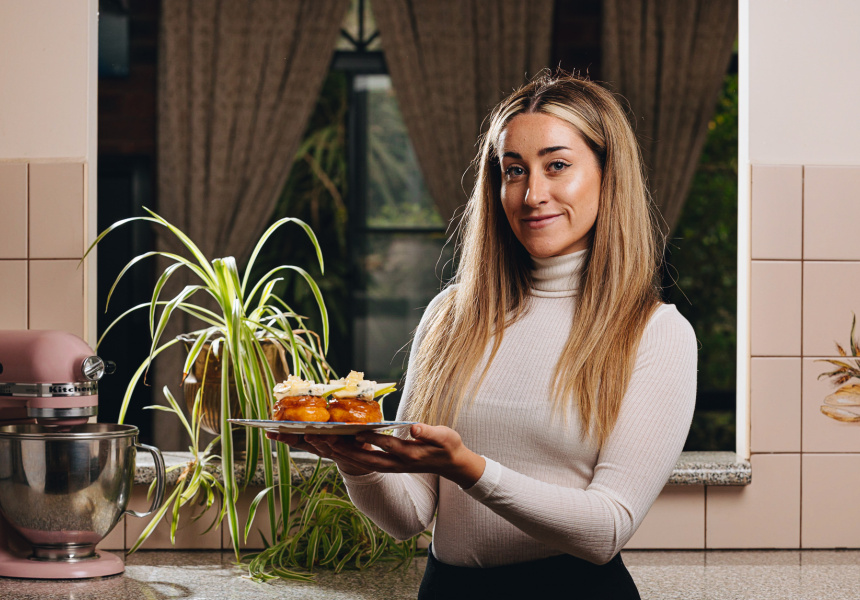 Even just a couple of years ago, French crullers weren’t exactly a staple of Australian pastries. The fried, doughnut-like treat has been booming here lately, though, thanks to its sheer flexibility when it comes to various glazes and toppings. Lune Croissanterie has even opened a spinoff venture devoted to the ring-shaped, palm-sized samples of airy choux.

Crullers are a regular fixture on the rotating weekly menus at Holy Sugar, Audrey Allard’s popular pastry business. Started in August 2020 as a delivery service during lockdown, Holy Sugar now focuses solely on pick-up from Workspace, a shared hospo/working space in Collingwood where Allard (a Lune alum herself) does all of her baking. Featuring a unique assortment of Instagrammable pastries each week, Holy Sugar’s dessert boxes are announced every Tuesday and reliably sell out by that same night.

“I had never seen one until a couple of years ago,” says Allard of the newly ascendant cruller. “I saw that Sixpenny [in Sydney] was doing a cruller – and a savoury one too. I started making them. It’s taken off a lot in Melbourne recently.”

Allard has done many colourful variations on the cruller already, utilising the pastry’s ability to support a wide range of toppings across the sweet-to-savoury spectrum. “The cruller is such a great carrier because you can make it sweet or savoury,” she says, likening its versatility to a canapé. “You can use figs once they’re in season, or pear and prune paste [on top]. You can kind of do anything with it.”

Allard developed a recipe that paired a pleasing honey glaze with creamy blue cheese and freshly sliced pear for a more savoury approach to the cruller. “A lot of pastry chefs use blue cheese in desserts, but I didn’t want to make it that sweet,” she says of her creation. “And you can use any type of fruit with the blue – you can use it like a cheese board.”

Her mother is actually a cheesemaker in Byron Bay, and the recipe’s Castello creamy blue cheese is her housemate’s favourite cheese, so it was right in Allard’s wheelhouse. Milder and creamier than most blue cheeses, it’s not far off from a brie, offering a buttery and milky feel while pairing perfectly with pear. As an optional add-on – especially for anyone wanting to tip it toward sweetness – Allard suggests placing a square of honeycomb atop the cruller in harmony with the cheese and pear.

“The cruller is quite soft on the inside, with a tiny bit of a crunch on the outside,” she says. “You’ve got a slice of pear, which gives it a bit of height, and then a decent portion of blue. And the glaze is nice and shiny on the cruller. It’s a really pretty dish.”

Despite its newcomer status and elegant, swirly exterior, the cruller is quite easy to make. Allard has streamlined her recipe even more for Broadsheet readers, with a thorough helping of dos and don’ts. Just be sure to keep the oil at the same temperature throughout the frying process, and rest the dough for 12 hours so it’s easier to pipe. Aside from the resting time, there’s only about 30 minutes of prep and baking required.

“People think you have to be really skilled to make them, but it’s honestly so easy,” says Allard. “If you follow the instructions, you’ll be fine.”

Cruller dough
Combine water, milk, butter, salt and sugar in a saucepan and bring to the boil over a medium heat. Once the ingredients are boiling and all the butter is melted, add bakers flour. Turn down heat to low and mix the flour for 1 minute using a wooden spoon; don’t overcook the mixture. Transfer dough into a stand mixer fitted with a paddle attachment and mix on a medium speed for about 3 minutes to take remove some heat.

Start adding eggs one at a time. If you add eggs too fast, you will end up with a lumpy choux pastry. There should be a few minutes of mixing before adding each egg. After adding the last one, mix until the cruller mixture has cooled and it’s nice and shiny. Your choux dough should have a shiny V when you lift your paddle attachment. Now it’s time to transfer your dough into a container and refrigerate until the next day or at least 12 hours.

Frying
Fill a piping bag with the cruller dough and start piping circles 5cm in diameter onto a sheet of baking paper. They should be quite easy to pipe, as the mixture would have firmed up in the fridge. Let the crullers sit on the bench for about 20 minutes or until a slight skin has formed; they will help keep the beautiful edges on the crullers. In the meantime, fill a large frypan with about 5cm vegetable oil.

Once your crullers are ready for frying, heat oil to 180C; you’ll want to keep the oil at this temperature throughout the frying process. Cut the baking paper around the cruller and place into oil paper side up; this seals the top of the cruller. You also want to leave the paper on the cruller to ease off on its own. Fry each cruller for 5 minutes, then flip and fry on the other side for another 5. Continue flipping until the crullers are a nice golden colour. You can cook a few at a time, but keep in mind that the oil temperature may drop if you cook too many at once. If the crullers are undercooked, they may deflate. Remove crullers from oil and place on a drying rack to drain any excess oil.

Honey glaze
Place honey, butter and salt in a small saucepan and whisk over a medium heat until just combined. Let the mixture cool slightly before dipping the crullers into the glaze. To finish, top the crullers with a slice of pear and a generous portion of Castello creamy blue cheese. Add honeycomb if desired.

This article is produced by Broadsheet in partnership with Castello

Produced by Broadsheet in Partnership with Castello Cheese. Learn more about partner content on Broadsheet.