Produced by Broadsheet in partnership with Loch Lomond Whisky.

Recipe: An Easy, Two-Ingredient Chocolate Mousse to Pair With Whisky

It’s the perfect midwinter dessert duo. In partnership with Loch Lomond, we ask a master chocolatier for an extremely easy recipe to pair with a single malt scotch whisky. 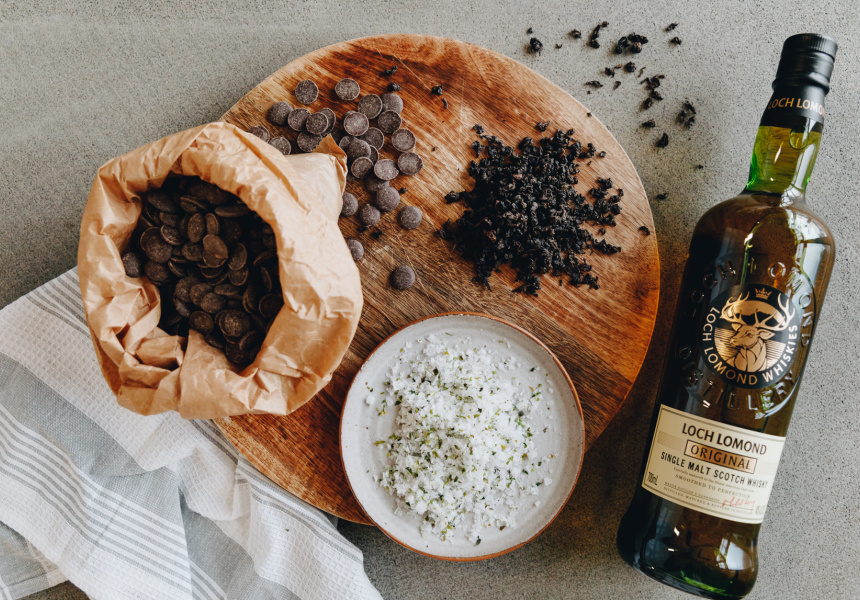 In winter, it’s natural to reach for small comforts to assuage the chill. Socks and slippers. Gloves and scarves. And of course, whisky and chocolate.

Bakker says whisky pairs particularly well with a dessert such as chocolate mousse on a brisk winter evening. So we asked her to teach us how to make it at home – as simply as possible.

“Sometimes people feel a little bit put off by doing tastings or matching desserts with spirits,” says Bakker of the whisky-chocolate combo. “But this is an easy one anybody can do.” And it starts with tea.

Begin by brewing a strong pot of oolong tea. Bakker says the full-bodied tea’s nutty notes go well with the earthy profile of Loch Lomond’s Original Single Malt Scotch Whisky. “This particular whisky has some nutiness on the palate,” she says. “So I wanted the mousse to complement it.”

The hot tea is poured through a strainer over some dark chocolate, such as Monsieur Truffe’s 58 per cent single-origin dark chocolate from the Dominican Republic, which Bakker recommends for its subtle fruitiness – though any chocolate between 55 and 74 per cent will work.

Once the chocolate is melted, the mixture is whisked in a bowl submerged in water and ice to create a light and fluffy texture. Or if you’re planning on serving the mousse later, you can simply stick the ganache in the fridge and whip it closer to dessert time.

Bakker sees the recipe as a base – get creative by adding garnishes, such as seaweed-infused sea salt (her preference), fresh fruit, caramel sauce, toasted almonds or honeycomb.

The objective here is to luxuriate. Eating this dessert “[is] not something you want to rush,” says Bakker. “There are so many subtle flavours in there ... take the time to really taste them all. It’s a great dessert to have after dinner when you’re just relaxing and unwinding from a long day.”

And because there’s no fat from cream or eggs, this light mousse simply melts in your mouth. Hence Bakker’s name for the dish.

Method:
Brew the tea – two tablespoons of oolong in 250ml water at 90°C for six minutes.

Place the mixture in a bowl over a large tray or sink filled with ice and water, making sure the bottom of the bowl touches the ice. Whisk until light and fluffy.

Transfer to serving bowls and sprinkle with sea salt or other garnish before serving.

This article is produced by Broadsheet in partnership with Loch Lomond.

Produced by Broadsheet in partnership with Loch Lomond Whisky. Learn more about partner content on Broadsheet.