“It has a kick to it, but it’s not overpowering,” says the Masterchef winner and host of Asia Unplated. Once prepped, you’ll have this plated and ready to eat in 10 minutes. 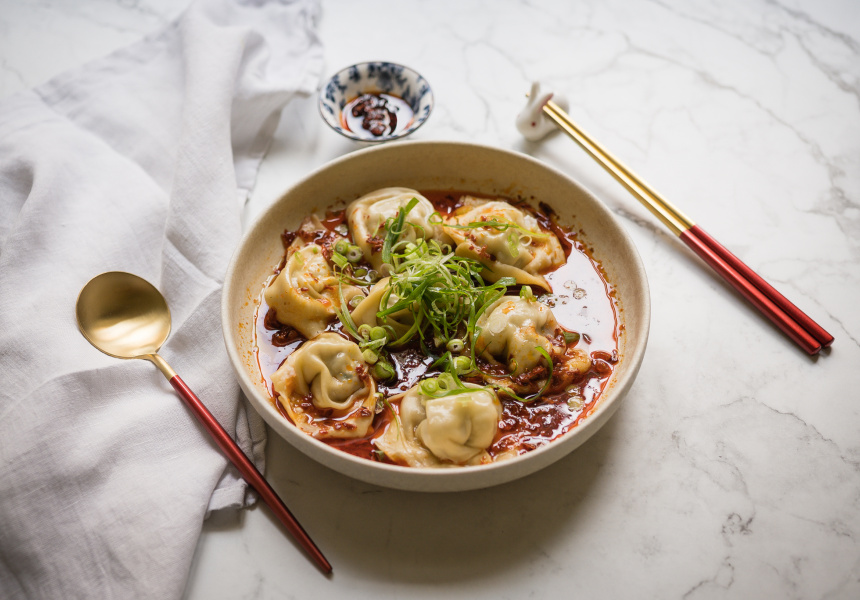 She also hosts a lot of online dumpling masterclasses on Golden Wok’s social media platforms, and a crowd favourite is the pork dumplings in chilli broth. “It is a spicy dish, but to be perfectly honest it looks hotter than it actually tastes,” she tells Broadsheet. “There is a kick to it, but it’s not overpowering.”

A plus with this dish is that you can take it slow in preparing and cooking the dumplings. “Once you’ve made and cooked the dumplings, they can sit aside for a bit and it doesn’t matter if they get slightly cold as the hot chilli broth will bring them back up to temperature.”

The flavours are quite traditional, says Chan, who draws on her Malaysian background while also looking to Thai, Vietnamese, Indian and Chinese influences. “I love the combo in flavours. The pork belly as the mince means the filling is moist and not dry due to the amount of fat present.

“The pork is incredibly flavourful and tender. The chilli adds a fiery depth to the dish and a wonderful flavour sensation when the two elements are combined. Of course, if you can’t handle chilli whatsoever, the dumplings [also] taste great with soy and black vinegar as a dipping sauce.”

For novices, Chan recommends starting with basic dumpling folds and working up to more complicated pleats. How long it takes depends on how much practice you’ve had. “If you’ve not made them before, it may take 45 minutes to an hour, but I think once you’ve folded a couple of dumplings, you get the hang of it and the next one just gets easier and easier.”

You can also adapt the broth to suit your tastes. “The base of a good chilli oil is definitely in two things: the quality of oil you use and also the aromatics you add,” explains Chan. “You can definitely substitute chilli oil ... the only difference is that the crispy chilli oil has the actual flakes in it, which makes it more textural with the crunch. It’s a matter of personal preference.”

You can find Diana Chan’s Golden Wok dumpling range, plus crispy chilli oil, in most supermarkets.

Method:
For the filling, place ingredients into a large mixing bowl. Mix thoroughly to ensure all the ingredients are fully incorporated.

For the chilli broth, bring the stock to a boil and add chilli oil and vinegar.

To prepare the dumplings, add a heaped teaspoon of filling to each square or round wrapper. Wet the edge of one side of the wrapper with water.

Fold the wrapper to close the dumpling and press down along the edge. (It should look like a pillow.) Pick up the wrapped dumpling and fold the two bottom corners together to make a simple wonton shape.

Line a steamer basket with baking paper. Place dumplings in the steamer, ensuring there’s space between each one (you can cook six or eight at a time, depending on the size of the steamer).

Place the steamer over a pot of water. Bring the water to a boil and steam dumplings for 10 minutes. You can use a normal steamer for this or a deep pan with a lid and a trivet.

To serve, place the dumplings in a bowl and pour over the chilli broth. Garnish with spring onions and coriander leaves.