Chin Chin’s signature kingfish sashimi is the rare crowd pleaser that’s easy to whip up at home. In partnership with Piper-Heidsieck, we speak to chef Benjamin Cooper about the dish’s unwavering popularity – and what style of Champagne to pair with it. 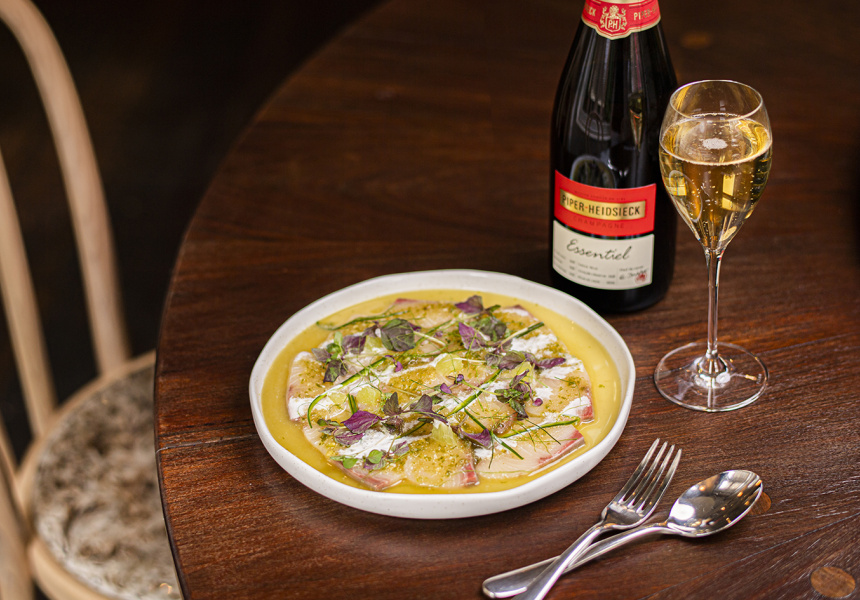 “It’s a classic,” says chef Benjamin Cooper. “We’ve had tables order them at the beginning and then have them again for dessert.”

He’s talking about an item that’s never left the menu at Chin Chin, Chris Lucas’s all-star CBD diner: kingfish sashimi with lime, green nahm jim and coconut cream. The ostensible starter is so popular, in fact, that guests tend to order it at any time during a meal – and often multiple times.

Cooper says the dish reliably converts diners typically averse to raw fish. “[There’s] all these [different] elements as you eat,” says Cooper. “It’s got the fresh citrus punch and bits of chilli heat, [then] the coconut cream, little cresses and Thai basil.”

Cooper says ever since the recipe was included in the first Chin Chin cookbook, the dish has become a centrepiece of many diners’ own dinner parties. Partly because it’s so quick and easy to make at home. (It also pairs well with a celebratory glass of Champagne – more on that later.)

It begins with the quality of the fish, which is crosscut into delicate two-millimetre slices. “Kingfish is such a beautiful fish,” says Cooper. “Raw, it’s delicious, with just enough bite and firmness. It’s not overly fishy – it’s got a delicate sweetness to it.”

Sashimi-quality kingfish should be readily available for any good fishmonger or speciality seafood shop. You can also use ocean trout or snapper. Ask for a loin or simply cut it down from a steak; just keep it as cold and as fresh as possible.

The green nahm jim (dipping sauce) should be made the night before, in order to let it sit and mellow the garlic bite into a more layered, rounded base of flavours. For the dish’s makrut lime leaves, either slice them as finely as possible, or pound them with the sugar and sprinkle through the dressing. Just make sure to add no more than a tablespoon of smooth coconut cream, which should be kept cold right up until pouring.

“From plating to eating should be pretty quick, within minutes,” says Cooper. “It will cure the fish the longer it sits in the dressing.”

From there it’s worth washing down with a drink of equal pep. “Raw fish and champagne is a match made in heaven,” says Cooper. He points to the notes of pear, almond and citrus in the likes of Piper-Heidsieck Essentiel Extra-Brut Champagne as a likely pairing – particularly with the nahm jim.

“Champagne and mild chilli activate each other with a lovely impact on the palate. You want those briny sea flavours – which you get in the nahm jim as well – and the spice hits the back of the throat, which goes really nicely with the lightness of champagne. It’s nice to have those fresh, clean, zesty, creamy flavours going on. It’s the start of the party.”

Here’s how to make Chin Chin’s kingfish sashimi at home.

Method:
Start with green nahm jim the day before. To make, blitz or pound the chillies, garlic and coriander root into a fine paste. Combine with remaining ingredients and a large pinch of salt, ensuring the sugar dissolves. Let sit overnight in the fridge.

For the sashimi, drizzle the coconut cream over a serving plate. Lay the fish flat on top, spreading it out slightly so each piece is only just touching. Layer the rest of the ingredients, starting with the lime: gently break it up and scatter over the fish. Next, the green chilli and lime leaf. Drizzle the nahm jim, being sure to spread it evenly around the fish. Add cress and torn basil.

Serve immediately and serve with a glass of Champagne.

This article is produced by Broadsheet in partnership with Piper-Heidsieck. Head to the Piper-Heidsieck Champagne Bar at the Rod Laver Arena Terrace throughout the Australian Open to explore more summer-ready flavours and activation-only exclusives.