Produced by Broadsheet in partnership with Copper Dog.

Basement bar Mary’s doesn’t see the sun. So we’re helping shine a light on it with a peachy new cocktail. In partnership with Copper Dog, we discuss what makes the drink an ideal autumnal taste. It may have existed for years in Sydney, but Melbourne’s newest basement den Mary’s only opened in January. So co-owner Kenny Graham is making the most of what little warm weather there is left. It helps that inside Mary’s, time stops.

“When it's warm people stay out a bit later,” says Graham. “So once the sun’s down they can come in [to Mary’s] to finish the night. And like any good pub, in here there are no clocks. You can lose track of the day and it’s all about long nights.”

Just as with its sister spots in Sydney, Mary’s on Franklin Street has low light and loud music – it feels detached from the busy CBD. It could be raining cats and dogs outside or stinking hot. You wouldn’t know. But a hint might be if you were sipping on a creation Broadsheet cooked up with the Mary’s team, a limited-edition fruity cocktail called Life’s a Peach.

“It’s basically a riff on iced tea with a little whisky backbone,” says Graham. “Even though it’s brandy- and whisky-based, it still brings out the flavour of peaches and apples, which are in season right now. It’s a great long, cold drink.”

Life’s a Peach takes a shot of Copper Dog Whisky and pairs it with smooth peach brandy, fresh lemon juice and a dash of sugar. Shaken “until it starts to get frosty on the outside of the tin”, it’s poured into a wine glass, topped with double-concentrate apple tea and a ton of ice.

“Copper Dog is a blended Speyside [single malt], which is the lightest Scotch whisky you can find,” says Graham. “This is where you start if you’re curious about Scotch. Having it in a cocktail makes it more approachable.”

While Mary’s is the spot to sit and solicit the drink, if you want to take it outside in the sun, Graham says it’s easy to make at home.

“You might have to go to the shops to grab a couple of things, but technique-wise it’s super simple,” he says. “If you can pre-pack it in a little cool thermos, you could even pack it for a picnic with friends.”

Here’s how to make the Life’s a Peach cocktail by Mary’s x Broadsheet.

Cocktail: Shake all ingredients – except apple tea – together in a Boston shaker. Strain into a wine glass filled with ice.

Top with apple tea and garnish with dehydrated peaches and a sprig of mint.

This article is produced by Broadsheet in partnership with Copper Dog. Drink responsibly.

Produced by Broadsheet in partnership with Copper Dog. Learn more about partner content on Broadsheet. 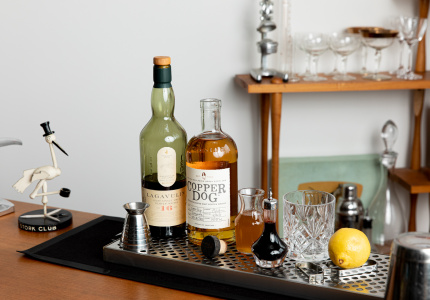 Is the Highball the Perfect Cocktail for Experimentation?