Veteran chef Brent Savage has created a make-at-home dish for a delicious snack full of punchy Iberian flavours. In partnership with Don Julio, we get the recipe and pair it with a sharp grapefruit and tequila cocktail. “The rumour is that one in every 10 is hot,” says the chef, who spends his busy workdays bouncing between the group’s five restaurants, Bentley Restaurant and Bar, Monopole, Yellow, Cirrus, and its latest venture, Ria Pizza and Bar in Potts Point “The one that is hot can really get you but they’re quite mild in general. By nature, they warm you up but don’t blow your palate.”

The unpredictable green peppers, named for the Spanish province of Padrón in Galicia from where they originated, are the star ingredient in a new recipe Savage has created for Broadsheet to pair at home with Don Julio Blanco and Fever-Tree grapefruit soda.

Savage’s roast Padrón peppers with sherry vinegar and jamon crumb is a dish with “big flavours” that he says would be right at home on the Ria Pizza and Bar menu. It’s a recipe that suits any occasion, he says. “Any time you can drink tequila is a good time to eat Padrón peppers. They’re the perfect snack and a great match with tequila.”

Savage says the tequila and the peppers both warm the palate when paired together. Traditional wisdom holds that you should drink something like milk to take the heat out of your palate when eating spicy food, but it’s not a rule Savage follows. “I don’t agree!” He says the warmth of the tequila accentuates the heat of the peppers.

To serve with the peppers, Savage has made a crumb with garlic, saffron, breadcrumbs and eschalot, which “gives it a nice-rounded flavour,” he says. “It’s one of my favourite crumbs to work with.”

In keeping with the dish’s Spanish flavours, Savage has added jamon to the crumb. “My favourite is iberico,” he says. “Jamon iberico is incredible. It comes from acorn-fed pigs and it’s one of the most delicious smallgoods you’ll ever try. You can get away with serrano [peppers] with this recipe because you’re frying it.”

While the recipe calls for the peppers to be blistered in a frying pan, Savage says cooking them on the barbeque “is a great option. It brings a real char and smoke to the pepper, which gives it an extra flavour.”

Method:
Rim half a tall highball glass with sea salt. Assemble all ingredients with plenty of ice. Garnish with a wedge of grapefruit.

Method:
Heat olive oil in a pan. Add the eschalots, garlic, saffron and jamon. Sauté on medium heat for 2 minutes. Add the breadcrumbs and continue to sauté until the crumbs are crisp. Set aside, ready to serve.

Method:
Heat the oil in a large fry pan. Add the pimientos until even blistering/scorching appears. Add the garlic and continue to cook until the garlic is golden. Move the pan away from the heat and deglaze the pan with the sherry vinegar. Serve the pimentos with a drizzle of sherry vinegar from the pan.

Place pimientos into a serving bowl and garnish with a generous serve of jamon crumbs.

This article was produced by Broadsheet in partnership with Don Julio. 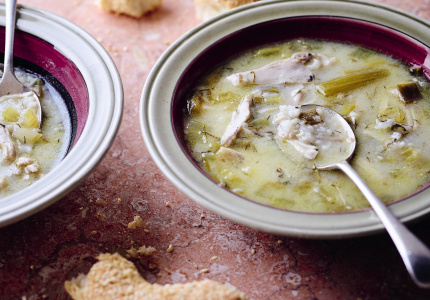