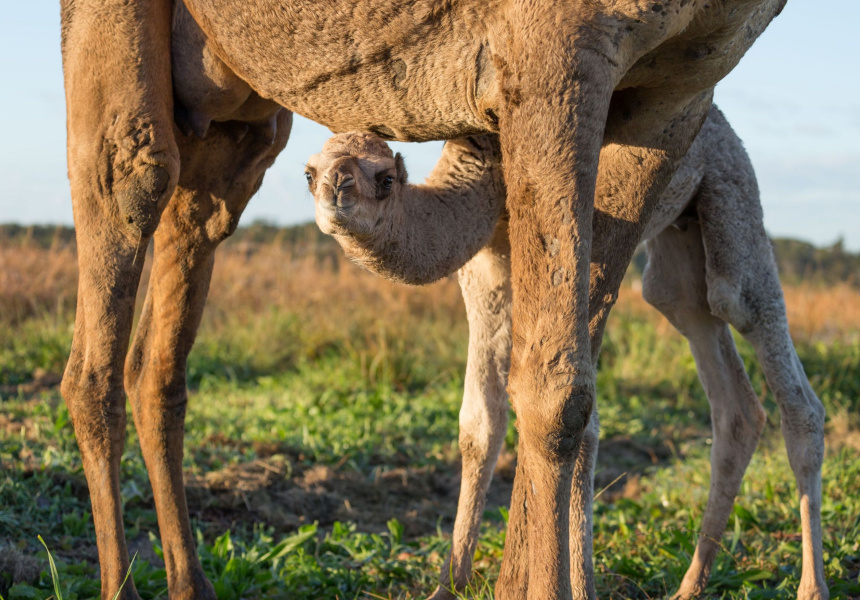 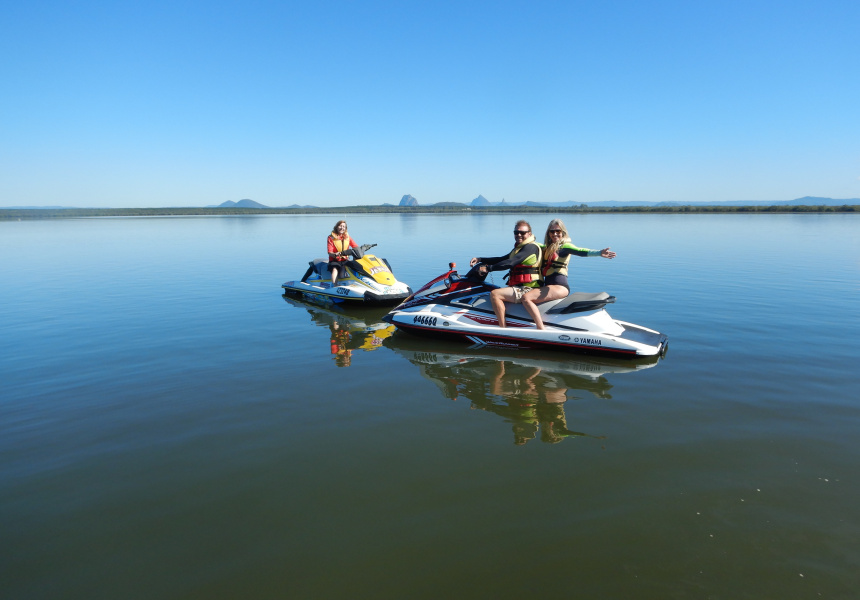 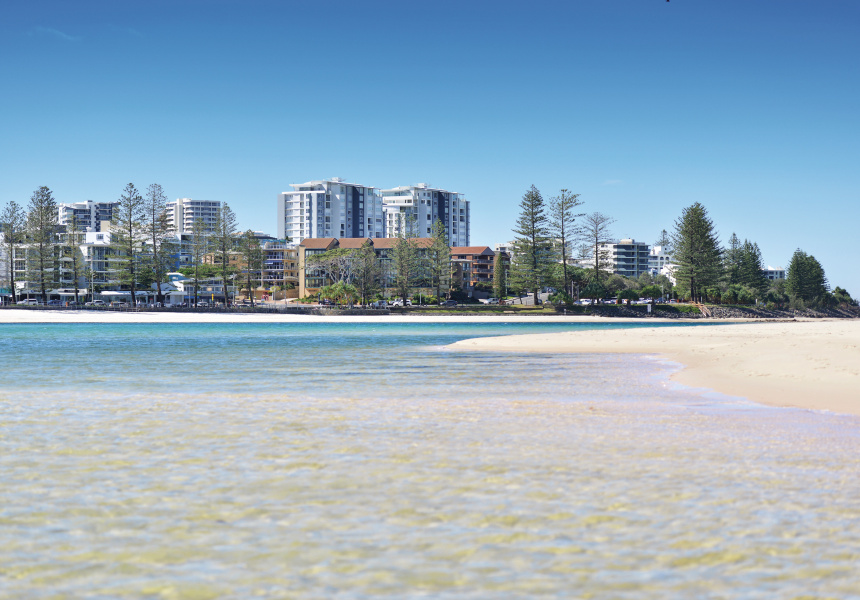 There are perhaps two ways to have a Bribie Island seafood experience like no other. The first is DIY. You sail your own boat, pitch your own tent and start fishing from one of the island’s best camp sites, Lime Pocket, with its views of the Glass House Mountains and the promise of close encounters with turtles, dugongs or dolphins.

The second is – sorry, campers – more fun. You hop on a jetski in Caloundra and zoom 51 kilometres down Pumicestone Passage to the pretty little marina at Sandstone Point, where someone else has already done the fishing for you. Tiger prawns, spanner crab, calamari, whiting, whatever else is local and biting that day, served up to your table on the water’s edge. Pull up a chair, it’s time for lunch.

This is the Seafood Safari, to be held over four days in August as part of the inaugural edition of Sunshine Coast culinary festival The Curated Plate. Broadsheet has been invited to preview the festival and, as far as introductions go, a thrill-packed exploration of this ecologically important waterway is going to take some beating.

On the ride home, Ken – our bandana-wearing jetski guide – does a few hot laps before stopping by the island to see if the turtles are popping their heads above the water today (no, must be an RDO). “Most locals have never seen this,” he says, snapping a pic of an osprey dipping close by our craft, one of the more than 300 species of bird that call the Moreton Bay Marine Park home.

It’s not just the locals who are missing out. For years the rest of the country has often overlooked the Sunshine Coast’s wider food and dining scene, such is the focus on Noosa. But the region beyond (and largely south of) Hastings Street has 1600 square kilometres of beaches, farmland and hinterland to explore.”

Take QCamel. A visit to this camel-milk dairy near the Glass House Mountains lets you say hello to some friendly fauna while busting a few myths at the same time. Camels, it turns out, don’t spit. They kiss. And they like a cuddle, too. At least, Lauren Brisbane’s ethically farmed camels do. “They just need love,” says Brisbane, who knows all 108 of her dromedaries by name. For The Curated Plate, the QCamel family will be opening the gates of their farm for a unique plate-in-paddock experience of canapés and craft beer at sunset.

From QCamel, head north on Steve Irwin Way, take a left at Landsborough and you’ll soon be high in the Blackall Range. Here you’ll find Spicers Tamarind Retreat, a secluded luxury hotel that has a distinctly Asian aesthetic – particularly in its in-house restaurant, The Tamarind. While Thai is the most obvious influence on chef Daniel Jarrett’s smart modern menu, there’s a smattering of Japanese in there as well. So would that be the reason for the festival’s pairing of Jarrett with acclaimed visiting chef Zaiyu Hasegawa, whose Tokyo restaurant Den is ranked third on Asia’s 50 Best Restaurants List 2019? Well, yes and no. “I’m not going to try to compete with his Japanese cooking,” Jarrett laughs. “I think I’ll do a hearty, Chinese-inspired dish instead.”

After eight years in the job, Jarrett is revelling in the local food scene’s growing momentum. “It’s the access to certain produce that’s changing,” he says. “There’s Mountaintop Mushrooms five minutes down the road, I’m getting coastal succulents from Nick Blake [of Wild Forage Australia], my swordfish is from Walker’s [the MSC-certified, Mooloolaba-based Walker Seafoods] … we’re only 30 minutes from the coast up here, so everything is really close.”

Venessa Cowell, event curator for the inaugural festival, says the region’s time has come. “In contrast to Noosa, this part of Queensland is relatively undiscovered and under-represented,” she says.

As well as the blue-chip Australian talent lined up for August (including Sydney’s Peter Gilmore, Chase Kojima and Clayton Wells, the Yarra Valley’s Matt Stone and Hobart’s Analiese Gregory), Cowell reckons The Curated Plate’s point of difference is its international component. Joining Hasegawa will be veteran French-born UK chef Raymond Blanc OBE and New Zealand’s Monique Fiso, whose Wellington restaurant Hiakai dishes up a modern interpretation of traditional Maori cooking. “We wanted to bring in chefs who are new to the region and will be seeing the produce with fresh eyes,” she says. “It’s all about the exchange of ideas between producer and chef – and that’s what creates excitement on the plate.”

It’s not just at the grassroots level that the Sunshine Coast is undergoing a sea change. The ongoing multi-million-dollar redevelopment of the Wharf Mooloolaba has lured bright new eateries, bars and boutiques to the precinct. And the state government is chipping in $2.5 million towards a $6.8 million conversion of the Big Pineapple into a food tourism hub (and new home to local success story Coyo yoghurt).

Then there’s celebrated ex-Urbane chef Alejandro Cancino, who has launched two new ventures since moving from Brisbane to the Sunshine Coast last year. Production of Veef, his flavour-packed vegan burger patty, has increased from 10 to 3000 kilograms a week. And he’s focused on opening his vegan degustation fine diner, Phyto, at Noosa Springs later this year.

Back at Spicers, we get talking to another guest, Liz, a Montville-raised, Brisbane-based young mum who’s back in the area enjoying a short break. So what does she make of the region now, after having been away for so many years? “I think it’s really underrated,” she says.

We do too – but maybe not for much longer.

Necia Wilden travelled as a guest of Visit Sunshine Coast. The Curated Plate runs from August 5 to 18.