Finally, a cross-country pub crawl. Well, sort of. Sink a beer from Melbourne’s Hop Nation in your kitchen, one from Sydney’s Grifter in the shower, and another from Adelaide’s Little Bang in your bedroom. These new mixed packs will be available at bottle shops across the country (and online) from this week. 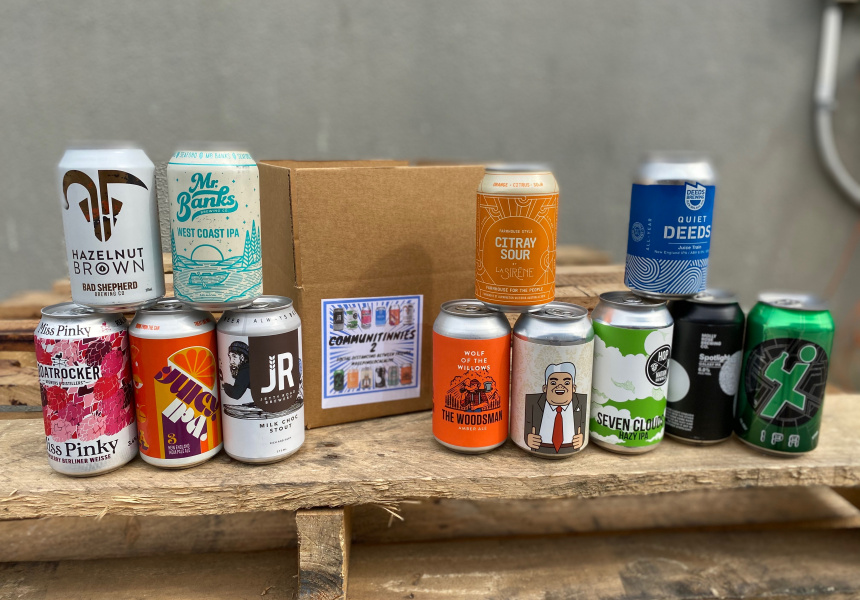 When bars and pubs were forced to close last month, Melbourne brewery Hop Nation acted quickly, getting together with other struggling independent breweries. Now it’s buying their locally made beers and curating mixed “Communitinnies” in packs of 12 and 24.

“Everyone’s had a tonne of cancelled orders and is sitting on a lot of beer,” says Hop Nation co-owner Sam Hambour. With 60 per cent of venues he was supplying kegs to now closed, it’s all about the tinnie for the time being.

Pick your pack, then plot an isolation-friendly pub crawl in your house. (Grim, we know, but it’s the best we’ve got right now.) Spread your tinnies out across the place and let the crawl begin. Or get a trusted member of your household to hide them and proceed Easter-egg-hunt style.

The all-Australian 24-pack is stacked with brews from some of the country’s best – Stomping Ground and Bodriggy from Melbourne, Wayward and Grifter from Sydney, Adelaide’s Little Bang and Big Shed, Newstead and Brouhaha in Queensland, and Beerfarm from WA. There’s another mixed 12-pack of easy-drinking pale ales, IPAs and dark ales from Victorian breweries.

At its Melbourne home, the Hop Nation team has so far wrapped up around 4500 packs – “obviously with some social distancing in place” – and they’ll be rolled out across Liquorland and First Class Liquor stores nationwide this week. “We’re being saved by the fact bottle shops are still functioning,” says Hambour.

After a sell-out first release, you can also get your hands on the Communitinnies 2 mixed 12-pack online or at Hop Nation’s Melbourne drive-through. It includes out-there beers such as a raspberry Berliner weisse, a milk-chocolate stout and a hazelnut brown ale from Melbourne breweries such as La Sirene, Molly Rose, Boatrocker, Coconspirators and 3 Ravens.

And while catching up in a crowded bar or your favourite pub is off the cards, Hambour and his crew have created their own hashtag, so you can keep the conversation flowing on social media.

“What’s great about the beer community is that people aren’t shy of sharing their opinions,” says Hambour.