From crunchy potato skins and wavy soft serve to the classic pink and green carpets, returning 20 years later to the restaurant chain that dominated my childhood was like travelling through time. 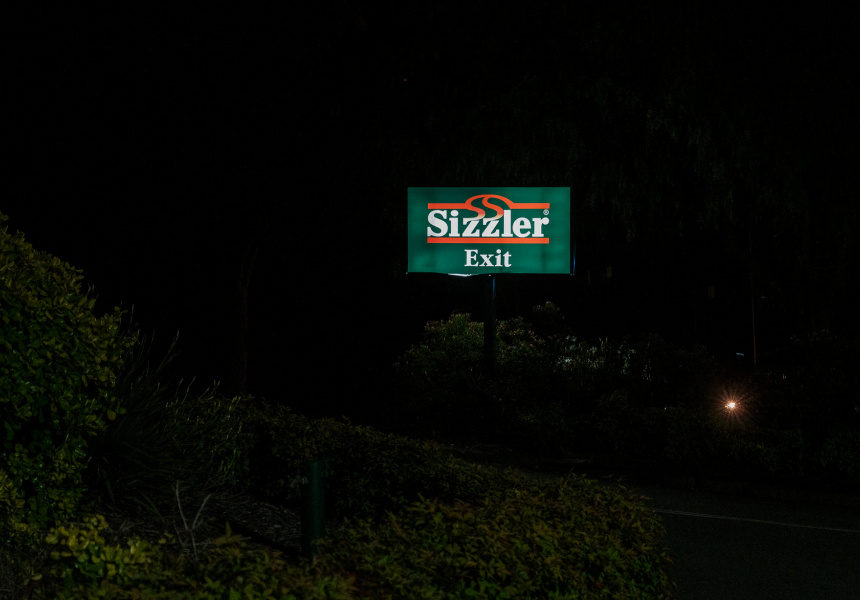 The announcement that Sizzler would close its last Australian stores by November 15 sparked a wave of millennial nostalgia. A restaurant chain we’d largely forgotten about suddenly became the subject of affectionate posts on social media lamenting the loss of cheese toast and all-you-can-eat bacon bits – even though most of us hadn’t set foot in a Sizzler since the early ’00s.

Like many, I decided a return visit was in order before the chain shuttered for good. For me, it wasn’t just about cheese toast. I had fond memories of delicious bolognaise, the crunchiest of potato skins (in hindsight, likely because they sat for hours in a bain-marie) and perfectly swirly soft serve. For many Australians born in the ’80s and ’90s, Sizzler was the location of all sorts of childhood celebrations – from dad getting a new job to a baby cousin’s birthday.

The chain originated in America, because of course it did. All-you-can-eat and a heavy emphasis on steak? Gotta be a US invention. In its ’70s heyday, it was known as a place where you could get the feel of a full-service restaurant, but without the price tag. By the 1980s, the chain had expanded globally – including to Australia.

My memories of Sizzler are from the late ’90s. Many a family get-together was held at the Bondi Junction Sizzler, a cavern of blacked-out windows that seemed to cover thousands of square metres, as everything does when you’re a kid. My sister and I would head there with our parents, wearing our very best going-out dresses. We’d meet my cousins and various uncles and aunties, taking up two large booths – the kids getting their own in a huge grown-up win.

All-you-can-eat is like nirvana for the under-10 set. I would pile potato bake on top of spaghetti and finish it off with chilli con carne. I’d eat about three mouthfuls, before wastefully shoving the mess to the side, running back to the salad bar to smother a soup in croutons. If mum let you have the “fire engine drink” (red lemonade free-flowing from a soda machine) you’d won the kid lottery – although the emotional breakdown brought on by the sugar high an hour later was significantly less fun.

It was a special event, going to Sizzler. But somewhere along the way, we just stopped going. I can’t put my finger on when, but at some point Sizzler lost its allure as a fun, family-friendly restaurant and became a relic of the past.

When the announcement came that the chain’s Australian arm would be closing permanently, I felt an urgent need to relive my childhood one last time. Surprisingly, not much had changed. While our Bondi Junction stalwart has long since closed, the Campbelltown Sizzler is still running (and will be until mid-November). An hour’s drive away, it still retains the Sizzler aesthetic I knew and loved. Muted pink and green carpet. Faux-wood panelling. Cushioned event chairs around laminate tables. Sticky booths adorned with plastic ferns.

The salad bar remains in place, the centrepiece where patrons gather – except, of course, Covid has changed the rules somewhat. Instead of clamouring around the potato skins and watching in horror as a kid scoops them out by hand before you, Sizzler has enlisted its waitstaff to serve customers as part of a Covid-safe strategy.

It did ruin the vibe a bit. There’s nothing all-you-can-eat about asking your waiter to bring you their idea of a large spaghetti serve, and I was absolutely not asking for my secret shame meal – spaghetti with a mix of chilli con carne and bolognaise sauce, topped with jalapenos and bacon bits.

Still, the nostalgia was strong. I was shocked to find the restaurant had just stuck, two decades later, to what made it famous in the ’90s. While Pizza Hut shuttered most of its all-you-can-eat restaurants at some point in the 2010s and turned to a delivery-based model, Sizzler continues to provide Australian families with a relatively cheap, kid-friendly (and now kind of kitsch) dining experience. The fact everything – from the wavy dessert bowls to the seemingly miles-long entry corridor – was virtually unchanged meant my trip down memory lane was all I’d wanted and more.

As with most places tied to fond early memories, one visit as an adult was enough to satiate the sentimental pull. To put it bluntly, even if Sizzler were to remain open, I wouldn’t suddenly become a regular. But it’s hard not to feel a little regret seeing a childhood landmark close after all these years – particularly one that’s stayed so much the same it’s practically a museum. For me, this might be the saddest hospitality casualty of Covid-19.