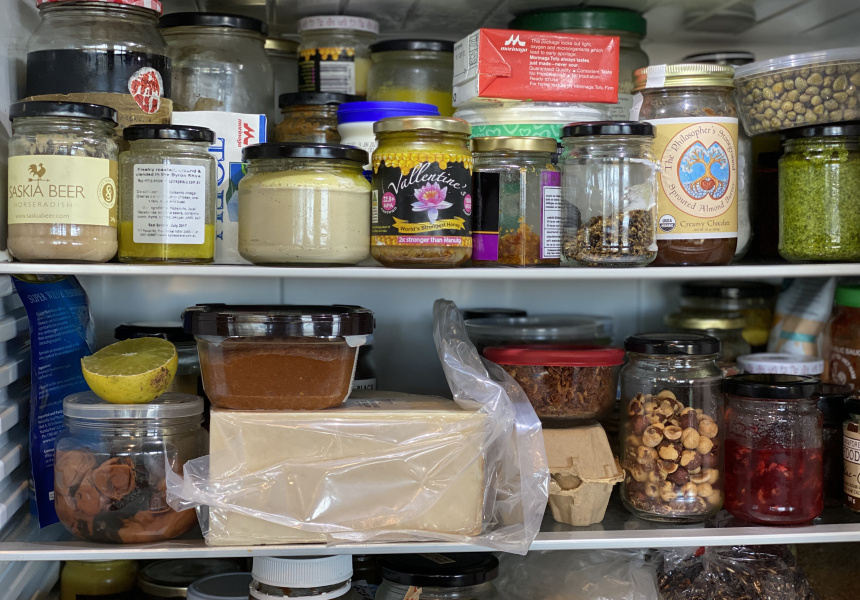 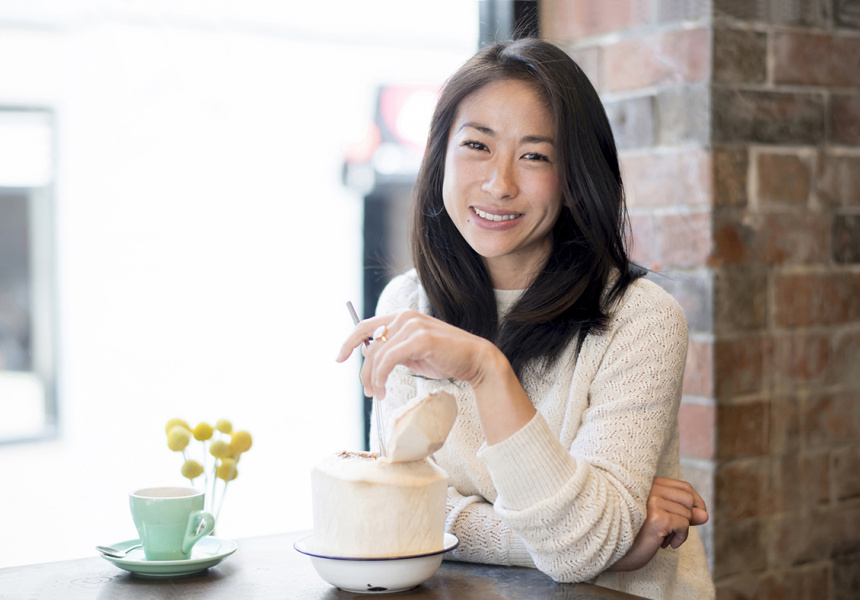 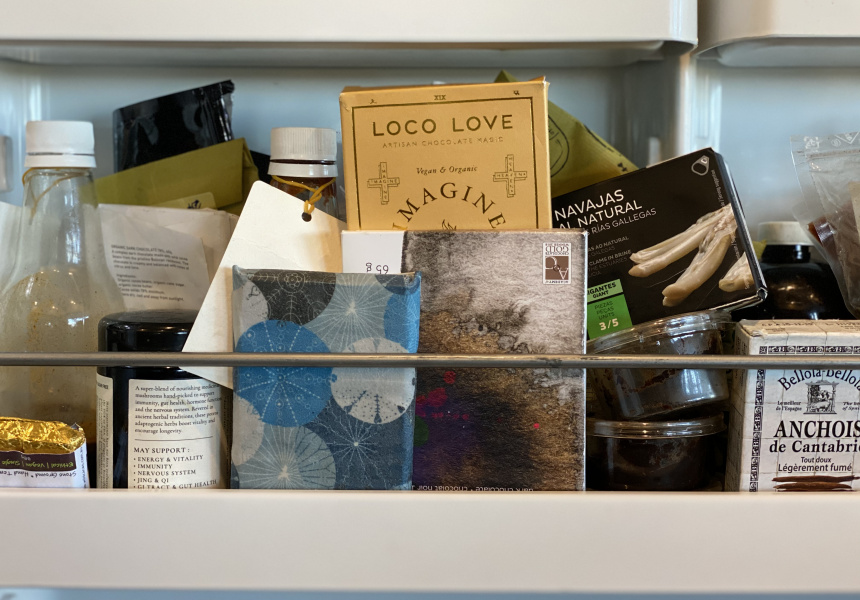 To add a bit of inspiration to our next supermarket shop and home-cooked meal, we’re taking a voyeuristic peek into some of the pantries of Australia’s culinary highest achievers. First was Ben Shewry, one of the country’s most pioneering chefs (whose fine diner Attica is currently operating as Attica at Home). Next up is Palisa Anderson, who lives in Byron Bay’s lush hinterland where she grows certified organic heirloom varieties of tropical fruits, and Asian and local vegetables and herbs at her blossoming Boon Luck Farm.

Anderson and her husband Matt set up the farm to grow Asian produce they couldn’t find in Australia – think peanut butter fruit, jujubes, miracle fruit and many more – supplying local restaurants and top eateries in the big cities, as well the Chat Thai group of restaurants in Sydney, which was established in 1989 by her pioneering restaurateur mum Amy Chanta. Anderson helped expand the empire as well as create the family-run Thai grocer Jarern Chai and Boon Cafe, a fusion cafe by day, and traditional Isan eatery by night, in Sydney’s Haymarket.

Here are the items she can’t live without – her pantry staples, her at-home go-to dishes, and the tips and tricks she uses to transform something from average to amazing.

Tell us about your pantry
Because of the humidity and climate in Byron, everything has to live in the fridge. The weather makes ingredients with oils (including grains and anything jarred) turn rancid fast, so I use the fridge like a pantry. Plus, we’re on a farm, so there’s plenty of competition for food (namely rats). So everything gets shoved into the fridge Tetris-style.

I consider Vallentine’s Honey the American Express of condiments – I never leave home without it – and use it as a finishing touch to breakfasts and desserts. Vallentine’s is a magical, local honey that is delicious, herby and different through the seasons.

And then there’s extra virgin olive oil. My go-to is Alto Vividus. It’s an absolute stunner, very peppery and full bodied – the kind of finishing oil that makes your eyes grow large because you just don’t expect so much flavour. I’ve been lucky enough to visit the single estate-grown orchard, magnificently tended by owner Robert Armstrong and his daughter Westerly who use regenerative agricultural practices.

Tell us what you do with the nuts:
I crave the fat from the nuts, plus I’ve got my nut selection down to a fine art. I’m quite particular about where I get them from. For instance, the hazelnuts are from Crooked Tree in Tasmania’s Port Cygnet. The orchardists are zealous about how they’re grown, harvested and processed, which for me makes them the most delicious hazelnuts in the world. Nuts are one of nature’s complete foods; they’re versatile and I use them in salads, stir fries, baking and for snacking on.

What’s your system for keeping things organised?
It’s based on delicate shoving. Since having kids and spending more time on the farm, we tend to cook the majority of our meals. So we’re always stocked to the hilt, which is great but exhausting. My greatest joy is when something is down to a quarter of a jar I siphon the contents into a smaller jar, which gives the illusion of creating more space.

I love it when friends come over because I tend to unload jars of stuff like preserves, ferments and condiments that we’ve made. That newly created space doesn’t last too long, though. I’m not a hoarder, but I tend to keep things in the hope that one day I’ll use them, or I’ve convinced myself that with aging it will turn it into something better. Sometimes it does.

What are your go-to dishes?
Coming from a Thai-Chinese background, we almost always had soup with our meal – including breakfast. That meant there was always a clay pot slow cooker on in the background of my childhood and our house always smelled of broth and TCM [traditional Chinese medicine]. That may have been the reason for my lack of friends as I’m sure that’s probably what I smelt like!

Even now, it’s the go-to comfort food for my family and me. I do it in batches, though, and freeze it, which I’m sure my mother thinks is sacrilege – she’s a big fan of everything cooked on the day it was intended to be consumed. I make stock with all sorts of bones, marrow and joint bones, and offcuts from vegetables and aromatics such as coriander roots. I pick the meat off the stock bones, and then season the meat with the dashi shoyu, chilli and sesame oil and re-add it to the stock with lots of fresh and preserved, leafy green vegetables and herbs. Then I finish it off with fried garlic and shallot and their oils to make an excellent quick soup for any time of the day.

What’s your favourite thing to make at home that’s totally worth the effort?
We make our own fried garlic and shallot oil, as well as garlic and shallot confit. It’s definitely a weekend project but it really doesn’t take too much time to knock up a batch. It’s useful for a mid-week meal, for salad dressing, a warm salad, or to finish off soup, noodles and rice. I use leaf lard or suet (made from fat that surrounds the kidneys of cows and mutton), olive and macadamia oil, duck and goose fat to make the oil. The rule of thumb is always cook it low and slow to draw out flavour and avoid burning.

What’s one item in your pantry that can be turned into something special?
I love having a good miso to play with, and it seems to be a more common staple now it can be purchased in major supermarkets. It can be used to give soups, marinades, glazes, dressings and sauces a level of depth that it may need.

I just love being able to knock up a soup for my kids out of three ingredients in a very short amount of time. We forage bull kelp, which is dried, add to freshly shaved katsuobushi (dried bonito flakes) and steeped in hot water for five minutes. You then strain it and add a tablespoon of miso and you have homemade miso soup. Add soft tofu, wakame (seaweed) and shallots if you are inclined.

Is there anything that’s become a new staple, something you’re cooking with more now than before?
I’ve recently discovered a new fish sauce that I adore, Dedduang. It’s made in micro batches by a community of old biddies in Sukhothai in Thailand based on a recipe they found from more than 150 years ago. It’s made from small, wild river fish similar to anchovies, which are fermented with locally grown pineapples and aged for 18 months. It’s completely unpasteurised, preservative free, has all sorts of minerally flavours and a nice balanced finish. I’ve been using it in almost everything, but it’s best splashed on a fried duck egg. It’s unbelievably delicious. I'm working on importing it to sell at the grocery store.

This is part of Broadsheet’s “Pandemic Pantries” series, where we take a voyeuristic look into the pantries of this country’s best chefs and food people.