Insider's tips for the best food and drink spots. In the time that OddFellows co-founders Sam Mason and Mohan Kumar have lived in Williamsburg, Brooklyn, the neighbourhood – and the whole borough – has changed dramatically. When Mason moved there in 1999 all the action centered around just a few blocks on Bedford Avenue.

“There was just good friends,” he says. “Your friends serving you coffee were in bands called TV on the Radio or Interpol.” This doesn’t do much to dispel the mythology of cool Brooklyn, especially when he adds, “Ten years after that, all your friends’ bands are huge … it’s just a totally different situation.”

Mason owns a bar, Lady Jay’s, in the area. He likes the changing scene – “I mean, it’s good for business” – but his favourite Williamsburg memory is an old one. “Back then you’d come home and there’d be old Dominican ladies sitting outside on the stoop playing dominos, and it was just awesome.”

Kumar, who has two young kids, loves Brooklyn despite rising rents. “It’s become such an easy walking neighbourhood, because there’s so much stuff,” he says. “There’s plenty of parks around here for kids.”

Here are some worth making time for, if you’re ever passing through.

This is the one place Kumar and Mason wholeheartedly agree on. The elegant New Orleans-style oyster bar is somewhere you go “when you don’t smell too bad and you feel like you can go in there and have a drink”, Mason says. “You don’t go straight after work, or at least, I don’t.”

“My friends have a restaurant on Grand Street I tend to go to four times a week,” Mason says. It’s this one. Considering a chef’s hours, that’s a fairly big commitment, but this place has all the good stuff: hearty, family-made Italian food, classic hip-hop and cocktails with just enough edge.

“It’s a quiet spot with great design, great pizza and a nice wine selection,” says Kumar. “And it's run by a local family.” But the unassuming spot is much more than a pizzeria – there’s a changing menu based on seasonal, locally sourced ingredients, and the seriously enticing antipasti selection alone is worth the subway ride.

There’s also a bakery next door (open 8am–8pm daily) that owner Edoardo Mantelli opened in 2014. As well as bread, cakes and Italian provisions, you’ll find the fresh pasta used in the restaurant.

“Diner has been a standby in Williamsburg for a very, very long time,” Kumar says. It’s practically right under the lights of the Williamsburg bridge, and it’s a place everyone in New York will tell you to go.

It’s good for everything: eggs in the morning, or an atmosphere-heavy meal later on, and the menu changes daily. Everything is great, according to the guys, but you can always count on the burger.

Roberta’s is a Brooklyn institution – that place where someone always seems to see Dakota Fanning or another celebrity. At the least, you’re guaranteed “good pizza and a good time,” says Kumar (he and Mason say the drinks are great, too). You can eat your wood-fired pizza (the Famous Original is so named for a reason, but the Family Jewels is also an MVP) in a warm, noisy dining room, out in the courtyard, or take it to go.

The dine-in theatre was the first to open in New York City when it overturned a prohibition-era liquor law in 2011. It screens current, art-house and rare films. Special events, guest appearances and a changing food and cocktail menu are inspired by what’s on show.

“Nitehawk is impressive just because of the concept and how well it came together,” says Mason, “with little to no reference points for how to do it right.” 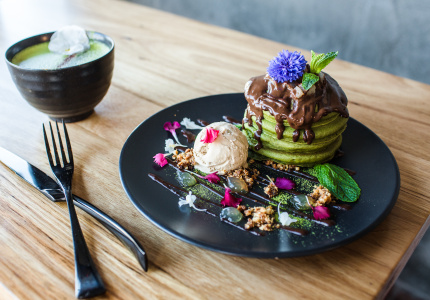