Australia’s top restaurants are now putting just as much thought into non-alcoholic drink pairings as their wine matches. Melbourne label Non is making bottled, booze-free drinks of that calibre, and they're now available in some of the country’s best venues. 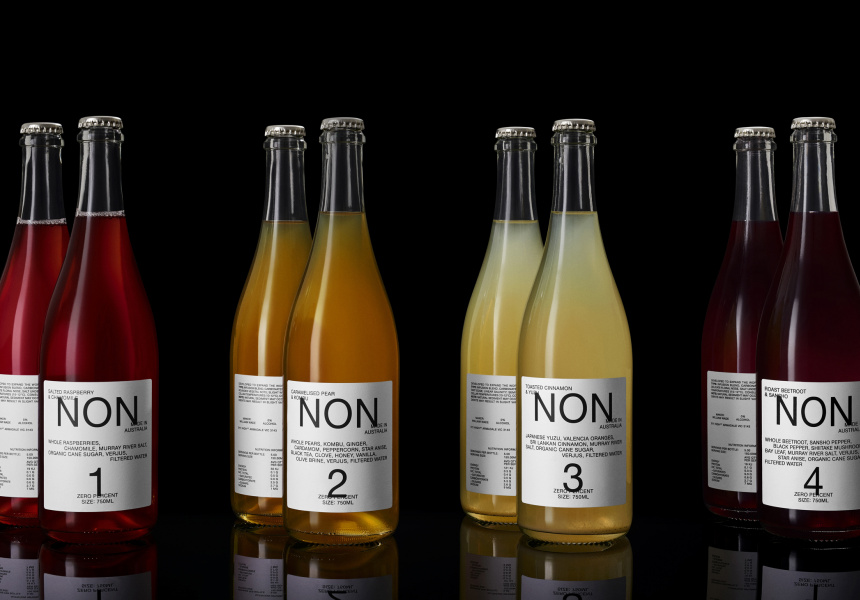 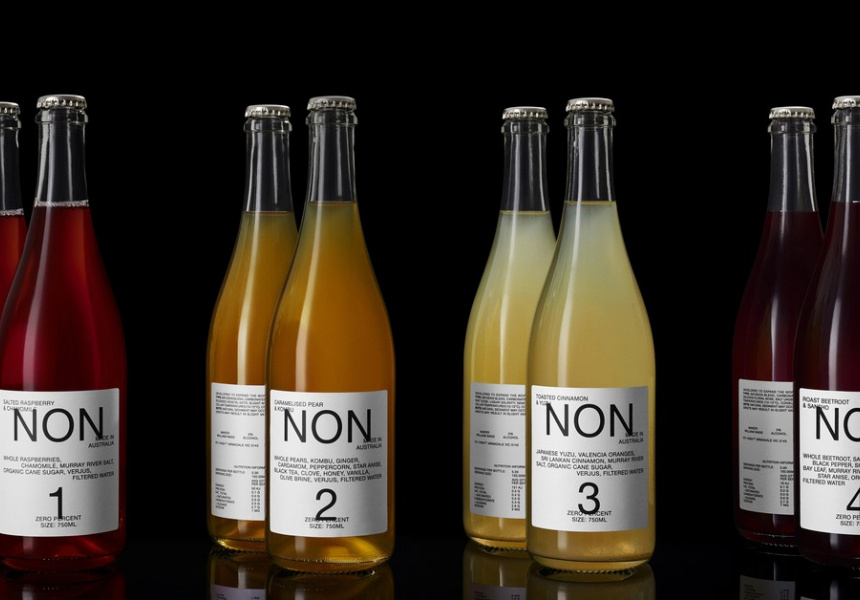 NSW native William Wade, like many chefs, wanted to work at the world-class Noma in Copenhagen. So he hit up chef/co-owner René Redzepi on Instagram, and soon found himself in the Noma kitchen.

There he was in 2015 – juicing for the non-alcoholic drinks pairing, one of the first of its kind. And he hated it. “It was so fucking tedious,” Wade tells Broadsheet.

But four years later he’s building on that foundation for his just-launched venture, Non – with business partner Aaron Trotman – a zero-alcohol wine alternative made in Melbourne that channels the boundary-pushing non-alcoholic drinks pairings gaining traction in restaurants worldwide. Those doing it best in Australia include Attica in Melbourne, Biota Dining in Bowral and Momofuku Seiōbo in Sydney.

Trotman had the idea; Wade had the know-how. They met serendipitously through Wade’s brother (who runs psychedelic ayahuasca retreats – Trotman’s done a few). The question was: could they create a restaurant-calibre beverage, bottle it so it’s ready-to-drink, and market it successfully?

More of us are drinking less, according to the Australian Bureau of Statistics. “But there aren’t a lot of refined, complex alternatives [to alcohol],” Trotman says. Lemon, lime and bitters no longer cuts it for the savviest teetotallers (and Dry July-ers).

Non-alcoholic booze is on the uptick, though. UK-made Seedlip, the world’s first non-alcoholic spirit, has “done the heavy lifting”, says Wade. “Any good bar or restaurant has a bottle.” There are also homegrown versions such as Brunswick Aces’s gin-without-the-gin, and non-alcoholic craft beer by Indigenous-owned Queensland brewer, Sobah.

But Non is in a category of its own – “So we can do whatever the fuck we want”, says Wade. Technically it’s a tisane (an infusion of dried fruits, herbs and spices in hot water), which – despite the emergence of kombuchas, shrubs and sodas on bar menus – we haven’t seen pitched as a non-alcoholic wine alternative before.

The first step: roast, dehydrate and sous vide the fruit. It’s then steeped in hot water (“like a huge cup of tea”, says Wade) with herbs and spices, filtered and (sometimes) carbonated overnight. “Sort of how they add hops to beer, then strain them,” he says.

The flavour combinations, each of which were tweaked 20 or 30 times during R and D, make just as much sense in a glass as they would on a plate. They were derived from dishes Wade served at his now-closed restaurant, Long Time No Sea, in Barragga Bay on NSW’s South Coast.

There’s an easy-drinking salted-raspberry and chamomile; caramelised pear and kombu (“Great with cheese – it’s like liquid pear paste”, says Wade); and a digestivo-style toasted-cinnamon and yuzu. Roasted beetroot and sansho pepper is to come.

Each presents like a pét-nat: pastel-coloured, cloudy (in some cases) and crown-sealed in a 750-millilitre glass bottle. The minimalistic design by Melbourne studio TCYK wouldn’t look out of place at your local wine shop. It’s also served in a wine glass, removing some of the social anxiety that can manifest when swearing off the sauce. Instead of clutching a tall glass of soda water, “People still want the motion – to be drinking from a wine glass [without] the shit that can come with it,” says Trotman.

But he and Wade aren’t anti-alcohol. For those enjoying a tipple, Non offers a way do it more responsibly, and with less hangover potential. An eight-course meal with eight matched wines leaves you “pretty tanked”, says Wade. But what if four of those wines weren’t actually wine? The deso driver gets the best of both worlds.

Trotman admits some venue operators were sceptical when they first encountered the product. “Most of them think it’s gonna be shit … Then the reaction’s usually [a positive], ‘Holy fuck’,” he says. Non is now listed at some of the country’s finest venues, including Supernormal, Sunda and Blackhearts & Sparrows in Melbourne, P&V Wine & Liquor Merchants and Alberto’s Lounge in Sydney, Africola and Osteria Oggi in Adelaide, and Wise Child Wine Store in Fremantle.

Going forward, the Melbourne label wants to follow in the footsteps of microbreweries: making seasonal and limited releases, and collaborating with other producers and venues (there’s a collaboration brewing with Melbourne restaurant Ides).