One of Tahiti’s most popular national dishes is a ceviche salad known as poisson cru, French for raw fish, or e’ia ota in the local language. “There’s not a party in Polynesia that doesn’t have this on the table,” says chef Morgan McGlone, founder of Belles Hot Chicken and Sunday, a diner in Potts Point.

McGlone has a long association with Tahiti. As a child, he spent idyllic holidays there visiting his grandmother, who moved to the island from New Zealand. His parents would let him stay there to explore "for weeks".

For a child, there’s arguably no better place in the world to spend a glorious month free from parents. McGlone remembers Tahiti nostalgically as a place where he ran wild with a gang of kids, swimming and exploring the islands. The ocean was incredibly blue, he recalls, “like a postcard”.

There was a great sense of community, and families gathered to eat meals together. “Someone would be cooking hangi-style in the ground, and then everyone shared that oven,” says McGlone. “I remember lots of fish – especially lots of raw fish.”

McGlone has put his spin on his grandmother’s poisson cru recipe, a classic Tahitian ceviche-style salad featuring white fish, such as mahi-mahi, wahoo, bonito or snapper, cured in lime and tossed with coconut cream. “You add tomatoes and red onion, and my grandma would toss in big chunks of cucumber,” says McGlone, who also throws in a handful of chopped dill. “I love dill and fish,” he says. “It’s such a great marriage of flavours.”

Taro, an island staple along with sweet potato and cassava, appears in the dish as chips. In Tahiti, the root vegetable is often served boiled, which has “zero flavour”, McGlone says. “I’ll probably be scorned by other Polynesians for saying that, but it’s true.”

McGlone much prefers taro when it’s fried. “I crisp some taro – slice it really thin and fry it to golden brown – and use it like a nacho. That’s your vehicle – you put the raw fish on the crisp taro,” he says. “It’s like a chip and dip, but with raw fish.”

Source quality fish from your local fishmonger, advises McGlone. “Get a nice fillet of fish and make sure there are no bones,” he says. “Cut a nice size dice, cure it and put it back into the fridge for at least 30 minutes, so it’s nice and chilled – there’s nothing worse than warm raw fish.”

To serve the salad, layer a banana leaf on a platter and place a bowl of crushed ice on top. Rest a second bowl holding the poisson cru on the ice to keep it chilled. “Generally, it’s gone quickly,” McGlone says.

Pair the poisson cru with a chilled beer – McGlone suggests a neutral lager – sit out in the sun and put on a ukulele-heavy playlist for the full Tahitian vibe. And follow it, of course, with a new Magnum Destinations Passionfruit and White Chocolate ice-cream.

Method:
Cut the fish into cubes – but not too small, as the lime juice will cook the fish and it will shrink a little.

Season fish well with salt and pepper and then mix with the lime juice. Allow to sit for 3–4 minutes.

Add the lime zest, onion, capsicum, tomato, cucumber and shallot, plus half the dill from the garnish. Allow to sit for a further 3 minutes and then mix through the coconut cream.

Taste and adjust seasoning if necessary. Chill in fridge for 30 minutes.

Meanwhile, 10 minutes before serving the fish, begin frying the taro chips. Heat oil to 178°C and place a few chips in the oil. Cook until golden brown and then place on absorbent paper and season lightly.

Serve ceviche either in a shell or in a clear bowl over crushed ice. Garnish with crisp taro chips tossed with remaining herbs and finish with olive oil drizzle.

This article is produced by Broadsheet in partnership with the new Magnum Destinations range. Magnum is giving four readers the chance to win the ultimate luxury holiday for two to their choice of The Whitsundays, Sydney, Melbourne or the Gold Coast by purchasing any Magnum Destinations product. Enter here. 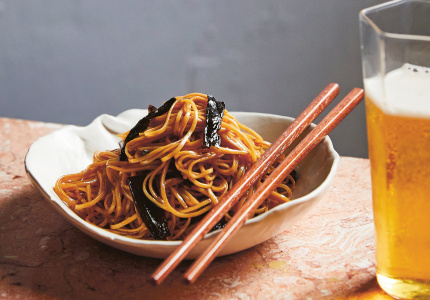 Recipe: You Can Have Rosheen Kaul’s Burnt Spring-Onion Oil Noodles on the Table in Under 15 Minutes