In an evening where culinary camaraderie was strong and the results were already out of the bag. 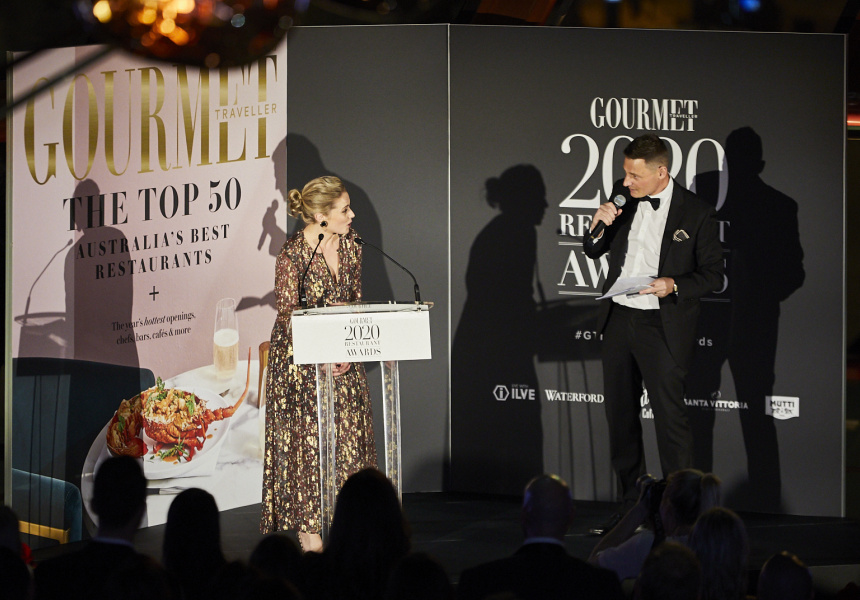 Australia’s leading culinary stars converged under the sails of the Sydney Opera House at fine diner Bennelong last night to hear the winners of the annual Gourmet Traveller (GT) National Restaurant Awards announced. Comedian Merrick Watts was also there, MCing the evening, and while his first joke wasn’t about the premature release of the winner list earlier in the week, it was the running gag of the evening.

“There were a few people privy to the information about the awards. And that was about 14,000 people,” he joked to the crowd – a couple hundred nominated chefs, front-of-house managers, sommeliers, restaurateurs and other guests.

The attendees didn’t seem to be too worried about the mishap – some said they hadn’t bothered to look up the results doing the rounds on social media after they were accidentally revealed to GT subscribers when the September issue was sent out early (it listed the victors).

It most definitely didn’t dampen the applause for Ben Shewry of Melbourne’s Attica when he was presented with the top award, Restaurant of the Year. Same with the peer-voted Chef of the Year category, which was awarded to Barbados-born Paul Carmichael of Sydney’s Momofuku Seiobo.

Watts joked when another Sydneysider, restaurateur Kylie Kwong – who recently decided to close her longstanding eatery Billy Kwong to concentrate on other endeavours – pulled out an acceptance speech for her Outstanding Contribution to Hospitality. “Ah, prepared ‘just in case’,” he quipped as the room laughed. GT described Kwong as a pioneer for fostering collaborations and for establishing a new model for Australian cuisine.

Also from Victoria, Joanna Smith, co-owner and wine guru at Geelong’s Igni, won the Maître d’ of the Year award. And for the second year in a row, Birregurra’s Brae won Regional Restaurant of the Year. Leanne Altmann, the beverage director of one of Melbourne’s leading hospitality groups, the Andrew McConnell restaurants, won Sommelier of the Year.

The only Perth venue to win a gong – for Bar of the Year – was Wines of While, which GT praised for establishing itself as ground zero for Perth’s natural-wine scene in less than a year. Alanna Sapwell, of Brisbane’s Arc Dining and Wine Bar won Best New Talent. And finally, the new award for Sustainability and Innovation went to Restaurant Orana in Adelaide.