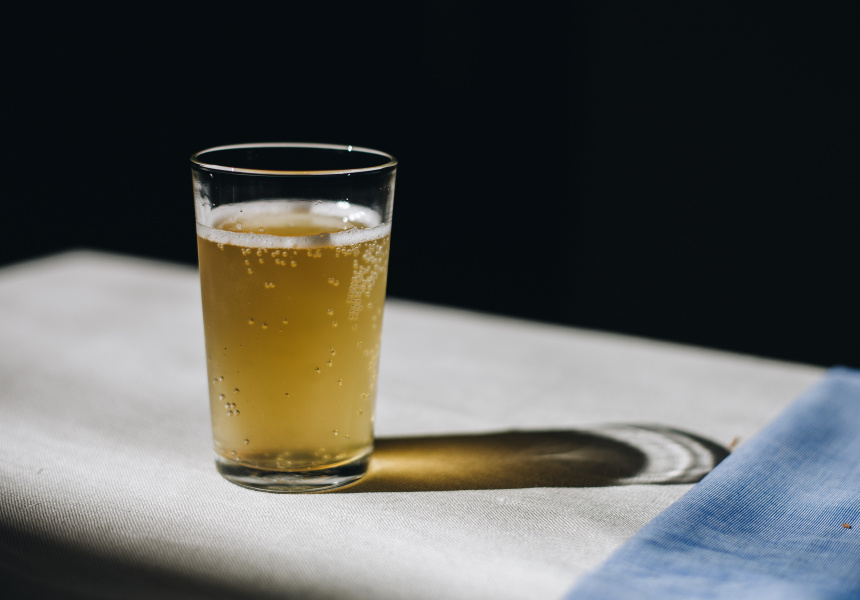 Pét-nat has been the fizzy darling of the natural wine world for the last few years. And kombucha (a fermented tea) is a long-time favourite among health buffs.

Now, a Melbourne brewer has combined the two beverages – along with juice from Australian apples and blood oranges – to create a new, low-alcohol hybrid in two flavours.

“I was making [kombucha] at home and found that products that are naturally fermented and carbonated had more complex flavour profiles,” says Monceau founder Alan Caras. “They were more interesting than what I’d get, say, at the supermarket.”

Caras has always been surrounded by fermentation gear. His family owns Winequip, a company that supplies winemaking and brewing equipment in Australia and New Zealand, so it was a natural next step to get into the nitty-gritty of brewing.

Commercial, large-scale kombucha brewing typically involves carbonating the drink using carbon-dioxide tanks after it’s been fermented once. (The initial fermentation involves adding a living bacteria and yeast culture, known as a scoby, to a mix of tea and sugar.)

With pétillant-naturel (which means “natural sparkling”), the fermentation is interrupted and the drink is bottled – and then continues to ferment in the bottle. Monceau uses the same method to double-ferment its kombucha.

“By sealing the bottle, the yeast will continue to eat the sugars in the drink and release carbon dioxide as part of that reaction, so you get sparkling wine – or, in this case, sparkling kombucha – with interesting and quite funky flavours,” Caras says.

Bottles are bought by the case (numbers per case depend on which bottle volume you choose) and delivery in Melbourne is free.

As with other natural wines, sediment sometimes settles at the bottom of the bottle, and because fermentation continues after it’s sealed, no two drinks are exactly the same.

“It’s still carbonating and sparkling naturally in the bottle, so there isn’t an exact consistency that a massive manufacturer would have,” Caras says.

Monceau has only released one flavour so far, Fuji Apple, made by adding apple juice (from West Gippsland in Victoria) after the first fermentation. The juice then ferments in the bottle to intensify the fruity and floral flavours. A second flavour, made with blood oranges from South Australia’s Riverland region, will be released later in May.

Caras thinks the drink will appeal to avid kombucha drinkers, but also to fans of craft beers and natural wines, who’ll also appreciate its complexity.

“I think a lot of people see it as purely a health product that goes hand in hand with ginger and turmeric, but it can also be a lot more,” he says. “It can be interesting to pair with food, or as a great low-alcohol alternative to beer or wine.”