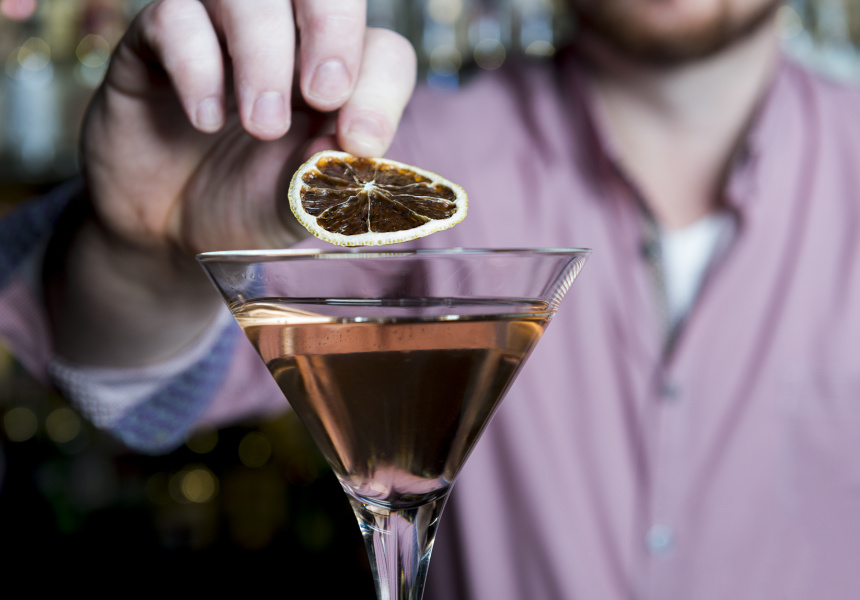 Julia Child, the legendary American chef, cookbook author and Francophile, liked her Martinis backwards. The ratios, that is. Rather than the traditional six parts gin to one part vermouth, Child preferred a glass of vermouth with just a splash of gin. This way, she believed, it helped stimulate the appetite and cleanse the palate. Mostly, she preferred the taste.

As a Martini consists mostly of gin or vodka, it can be daunting for the uninitiated – in the same way oysters are for those who’ve never tried them. But there are a number of ways to approach this iconic cocktail.

“First of all, don’t rush it,” advises Thalita Alves, World Class Top 100 bartender at Sydney’s Bulletin Place. “It's a cocktail to be appreciated. Sip a bit of water first. Then have small sips of your Martini. Let it sit in your mouth for a while. Get used to that new sensation, and those new textures and flavours.”

Needless to say, what you make it with also matters. A lot. It’s a two-ingredient drink, but that doesn’t mean there’s not room to move. “If you have a sweet tooth, try sloe gin,” says Shaun Byrne of Melbourne’s Gin Palace. “If you really like the flavour of gin, use a London Dry, such as Tanqueray.” Experimenting with different gins is a good way of discovering what you like. Using vodka instead of gin is another option. Ketel One vodka, with its smooth finish, works particularly well.

Then there are ratios, garnishes and temperature. The reverse Martini, as Julia Child enjoyed, “can be helpful on your first ride”, says Alves. Vermouth is a wine product so it’s less alcoholic, and the flavour is less sharp, than a traditional Martini. Just ask for your Martini “wet” if you prefer it with more vermouth and “dry” if you prefer it with less. It’s important to note that even when the scales tip in favour of vermouth, the flavour of gin is not diminished. The botanicals within vermouth actually enhance those in gin, particularly in the case of Tanqueray gin.

Garnishes come down to personal taste, but a twist of citrus is always a good balance to the cocktail. Olives and olive brine (olive brine being the ingredient that turns a Martini “dirty”) can add another flavour dimension; as can a pickled onion (a Martini with an onion is called a Gibson). Although not a garnish, “rinsing” the glass out with a small amount of another spirit, such as a smoky Talisker whisky or Lagavulin whisky, can also bring a different flavour to the cocktail.

Experiment with types of gin, types of vermouth, ratios, rinses and garnishes, to discover what you like. But whatever the design, the most important thing is to ensure your cocktail is as cold as possible. “A warm Martini is hard to like,” says Alves.