Like its mascot the lyrebird, Lyre’s is a master of mimicry, simulating absinthe, amaretto, triple sec and Campari from flavour all the way down to the boozy burn. With a glass of Lyre’s Spiced Cane Spirit in hand, I find myself drinking something that looks, tastes, smells and even feels like rum. But it’s not rum. It’s a flavour analogue that does everything the real thing does – except contain alcohol.

“What we set out to do is create non-alcoholic homages to the greatest flavours known to humankind – in liquor,” says Lyre’s co-founder Mark Livings. His new booze-free spirits company makes alternative rum, gin, whisky, absinthe, amaretto and more.

As alcohol consumption is on the decline (it hasn’t been this low since the early 1960s), the non-alcoholic spirits market is booming. If you’ve been designated driver or otherwise steering clear recently, you’ve likely run across a few new players, from zero-alcohol wine to gin-free gin. Bars are extending the offering for teetotallers beyond a couple of sugary mocktails to an increasingly excellent selection of low- and zero-alcohol drinks.

“The hypothesis was that if people could move in a frictionless way from the drinks they already know and love to a non-alcoholic version of them, that would be a more powerful proposition than trying to create a new flavour,” Livings says.

One of Livings’s measures of success for Lyre’s spirits is whether they can be subbed into standard cocktails without negatively affecting the flavour. Ideally, you wouldn’t even notice the booze is missing. The usual Campari in a Negroni, for instance, can be swapped for Lyre’s bitter Italian Orange, which has a bright, biting citrus hit. And substituting everyday triple sec for Lyre’s version will knock a few percentage points out of a Cosmo.

“What we wanted to deliver,” says Livings, “was the ability for anyone to make their drink their way – with full alcohol or a little bit of their favourite spirit, or entirely non-alcoholic.”

Lyre’s take on absinthe brings big notes of anise, wormwood and fennel without the ridiculously high ABV of the alcoholic version (often more than 70 per cent). And a grog-less amaretto retains the pronounced nuttiness of the classic liqueur. You’ll also find white rum, vermouth, coffee liqueur and Aperol equivalents on the list. But one of the challenges, Livings says, is mimicking the (non-inebriating) physical sensations caused by alcohol.

“Ethanol is pretty incredible. It has high viscosity and a physiological reaction as well. It’s a solvent, so it strips the moisture from your mouth and lifts the flavour intensity,” he says. “That’s the challenge we needed to rise to.”

Livings called in Doehler, a German food production company, and Australian sommelier David Murphy to help get Lyre’s imitations up to standard. Doehler counts more than 4000 raw ingredients in its labs. Here it’s used seaweed and vegetable gum to boost viscosity, while ginger, white pepper and capsaicin simulate that sharp, prickling alcohol burn. The level and type of sensations vary depending on the drink, too.

Though Livings and his team have cracked plenty of flavours so far, tequila and Scotch whisky are still on the drawing board. Vodka, on the other hand, might not make it at all.

“That’s a bit of a head scratcher. There are not a lot of flavour notes,” Livings says. “Do we deliver a hot, spicy water to the public?” 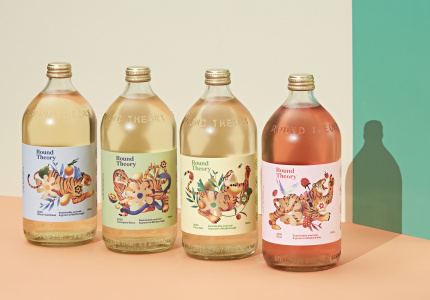