You don’t need a massive menu or huge warehouse space to make a big impact in hospitality. In partnership with MINI, Broadsheet talks to owners of hole-in-the-wall businesses about the benefits of keeping it simple. 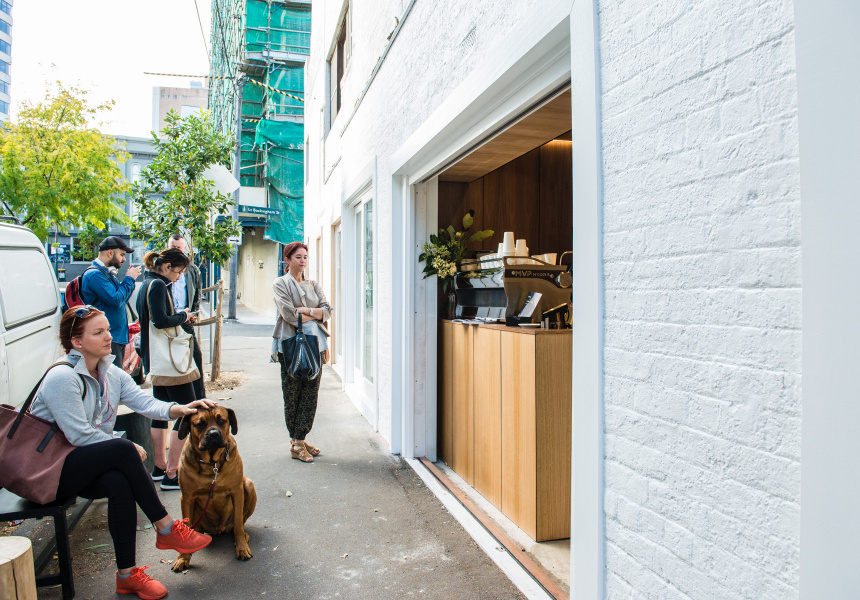 But more and more we’re seeing small street-level venues popping up with a slim menu of ultra-specific offerings, sometimes served directly through a window.

In Sydney, Surry Hills cafe Neighbourhood has been attracting customers since 2016 for its sleek simplicity. Anthony Svilicich, who took over the business in 2018, says his small cafe “brings a lot of people in the local area together”. It’s a tiny coffee bar that opens onto Buckingham Street, with only a few timber seats spread along the pavement.

“It feels very homey and simple,” says Svilicich. Customers “can just chill out on the street, sip a quick coffee or have a chat with the locals”.

Neighbourhood’s menu is just as small: coffee from local roaster Artificer; a rotating special coffee (currently from Melbourne roaster Small Batch); and a selection of bagels from Smoking Gun with simple toppings, or specials (currently with brie, ham, and beetroot and gin relish).

Keeping it simple has benefits, says Svilicich. “A lot of places tend to overcomplicate things. Going back to the basics of grabbing a quick, simple coffee on the run – I think people find it a lot more accessible, more familiar.”

Svilicich has seen both sides of the street, too. Before buying Neighbourhood (which he runs with two part-time staff), Svilicich owned the much larger 75-seat Ashfield cafe Excelsior Jones. “It was always a struggle to actually focus on the business,” he says. “Minimal staff, minimal overheads give you more of a chance to focus on trying different coffees, those kinds of things.”

For some, this hole-in-the-wall approach is a snugly convenient way to run a business. Perth’s Kuld Creamery is a family-run operation in a narrow laneway. Customers can lick scoops of Peanut Butter M&M or Pumpkin Spice ice-cream on rustic chairs and crates along the laneway, but Kuld’s product is designed to be bought by wandering locals who then wander away again, dessert in hand.

These tiny hospo spaces are also ideal for testing out who your customer base is before launching a business on a larger scale. Adelaide’s bustling Elementary Coffee was initially conceptualised as a hole-in-the-wall espresso bar, before demand made its owners rethink their approach. Brisbane’s Allpress Espresso is also evidence of this: they started out in a tiny haven on Bimbil Street and now occupy a gigantic warehouse-style space in East Brisbane.

“It was all about us connecting and getting to know Brisbane and forming relationships,” Allpress Espresso’s manager Elise Cook told Broadsheet. “We wanted to feel at home before we opened the full cafe.”

Some small businesses that do end up expanding try to stay true to their hole-in-the-wall ethos of focused food. In Melbourne, 22-year-old James Eddy opened Good Gnocchi last March. He attracted an instant cult following by selling gnocchi and garlic bread out of a small window on Langridge Street in Collingwood’s sparse industrial enclave.

“There’s nothing else on the street,” says Eddy. “When people are just standing outside looking in [and] ordering, other people see that. It’s a bit of advertising.”

His success has also helped him grow. Quickly. Eddy recently employed an extra staff member and expanded his seating capacity from a few benches on the pavement to include a 30-seat indoor space. He says he “likes people sitting inside” but admits the initial concept is still dear to his heart.

This article is produced by Broadsheet in partnership with MINI and is inspired by the MINI Clubman, the ultimate urbane vehicle for weekends of work and play due to its 360 litre luggage capacity.