It took time, but we’ve collected nearly every brand of boozy sparkling water currently available in Australia, from family-run startups to multinationals such as Smirnoff. Among them we’ve got seltzers with native ingredients, seltzers that taste like strawberries and cream, and an eight per cent alcohol beast geared for messy, messy nights. 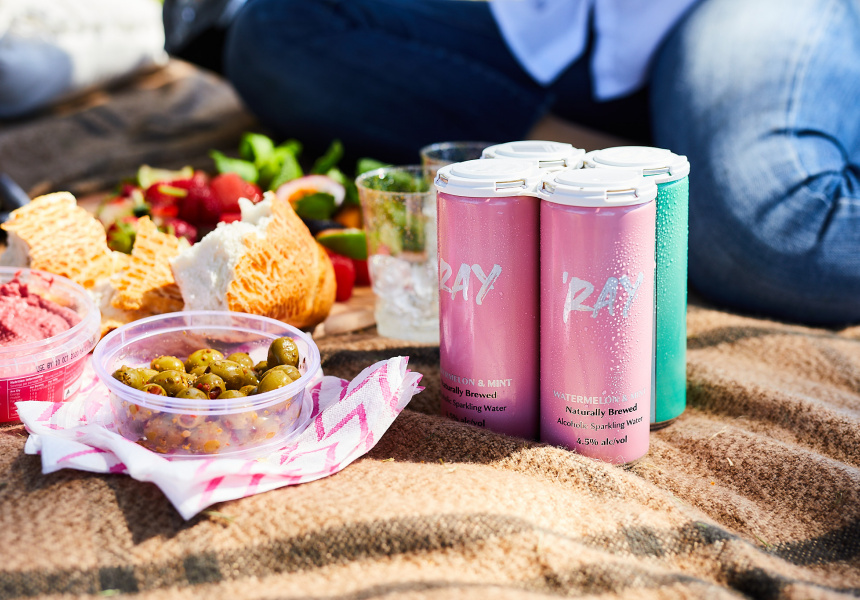 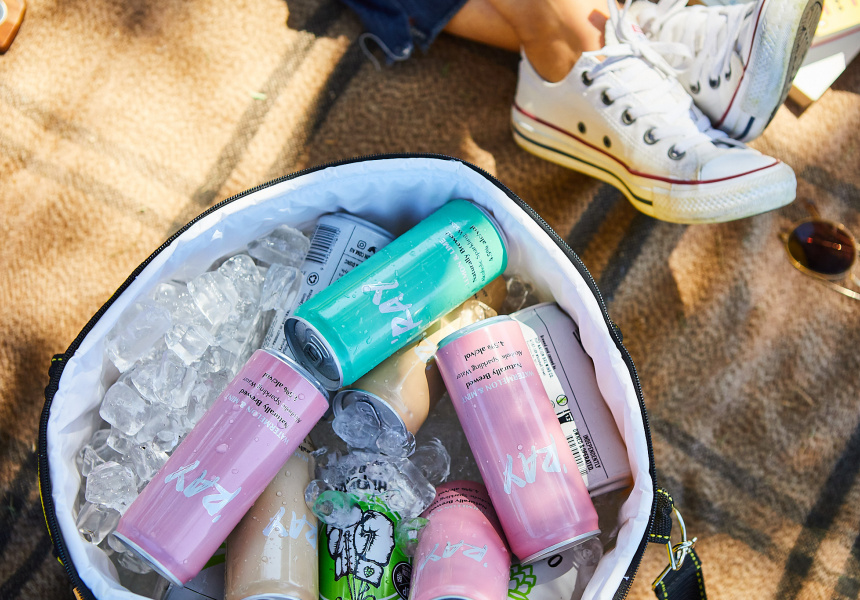 What’s hard seltzer and why is it suddenly everywhere? Here’s the long answer, which we reported earlier this year.

And the short answer:

Up to speed? Great. Let’s dive into the bajillion new hard seltzers now available in Australia.

’Ray
Melbourne brewery Hop Nation came out with this sub-brand earlier this year, naming it after its home suburb of Footscray. The three 4.5 per cent ABV flavours are peach, watermelon and mint, and lemon and lime. Buy it here, at Dan Murphy’s or an independent bottle shop.

Moon Dog
It was only a matter of time before the larrikins at Melbourne brewery Moon Dog got onto something this easygoing and fun. Their four per cent ABV seltzer, Fizzer, deviates slightly from the usual flavours. There are four to pick from: strawberry and vanilla, pineapple and lime, coconut and mango, and tropical crush (passionfruit, orange, mango and pineapple). Find Fizzer at Dan Murphy’s, BWS or an independent bottle shop.

Dad and Dave’s Brewing
This Sydney brewery is packaging its seltzer under the name Wildspirit, and uses a gluten-free grain-spirit base, rather than the more popular brew method. The team reckons this results in a superior flavour and mouthfeel. Shop the 3.5 per cent ABV range here. There are four flavours: lime, passionfruit, mango and raspberry.

Sunly
Made by Byron Bay’s Stone & Wood, these four per cent seltzers are brewed from sorghum for a gluten-free finish. The slimline cans come in three different flavours: blood orange and grapefruit, native Davidson plum and berry, and ginger and lemon. Buy direct here or find your nearest physical stockist.

Fellr
Fellr’s founders, Andy Skora and Will Morgan, worked together at Pernod before seeing an opportunity to move into seltzer. From their base in Sydney they now brew three flavours, watermelon, lime, and lime and ginger, at four per cent ABV. Buy cans here or find a physical stockist.

Lust Liquor
Sydney duo Marc Lindberg and Nick Rowell launched Lust Liquor in 2018, when they were just 20 years old. Their first products were standard vodka-based RTDs, but they quickly jumped onto seltzer with everyone else. Lust’s single flavour, lime, clocks in at 4.2 per cent. Buy it direct or find a physical stockist

Lost Palms Brewing
Peach and watermelon are the two 4.5 per cent seltzer flavours currently brewing at this Gold Coast operation, which is getting ready to open a new brewery in Brisbane. Buy direct, at Dan Murphy’s or BWS.

Sips
Melbourne-based married couple James and Jacqui McKay are behind Sips, which focuses on native flavours. There are four to choose from: lemon and lemon myrtle; pink grapefruit and Davidson plum; raspberry and riberry; and cucumber, mint and strawberry gum. Buy it here.

White Claw
The source of countless memes. A pop culture phenomenon. The one that started it all. The four year-old Canadian brand, from the founder of Mike’s Hard Lemonade, became available in Australia this month. For now, just three of the nine flavours are here: mango, lime and ruby grapefruit. And for some odd reason, Australia’s White Claw is 0.5 per cent less alcoholic than its five per cent North American counterpart. Grab some at Dan Murphy’s or First Choice Liquor.

Tidal Artesian Seltzer
This slick-looking brand is an offshoot of Victoria’s St Andrew’s Beach Brewery, on the Mornington Peninsula. Its initial two flavours are plain lime, and yuzu, orange, mandarin and grapefruit. Buy it here, at Dan Murphy’s or BWS.

Great White
Margaret River brewery Cheeky Monkey is behind this standalone seltzer label, whose three flavours are black cherry, raspberry, and orange and grapefruit. Buy it here, at Dan Murphy’s or BWS.

Quincy
This is Australia’s first ever hard seltzer, courtesy of Lion, the drinks giant in turn owned by Japanese company Kirin. Brewed from a rice base and clocking in at four per cent, Quincy comes in cans or glass bottles, filled with either passionfruit- or lime-spiked bubbles. Buy it at Dan Murphy’s, Liquorland or BWS.

Somma
This, Australia’s second-ever hard seltzer brand, is produced by Coles and sold in two flavours – cucumber and mint, and watermelon and lime. It’s less effervescent and less alcoholic (3.5 per cent) than most seltzers. Find it at Liquorland.

Liberty Coast
At 3.5 per cent ABV, this Woolworths-backed seltzer is readymade for the park and the beach. It’s available in raspberry and lime flavours at Dan Murphy’s and BWS.

Rainbird
Woolworths’ second seltzer brand is made for messy nights, with two ABV options: six per cent or eight per cent. That makes Rainbird the booziest seltzer in Australia by a wide margin. Get it “natural” (i.e. no added flavour) or lemon-lime from Dan Murphy’s or BWS.

Good Tides
This playful 4.3 per cent seltzer, made by Asahi, includes triple-distilled vodka rather than using the brew method. Currently there are two flavours: raspberry and lemon-lime. Buy it at Dan Murphy’s, Liquorland or BWS.

Actual
It’s been 25 years since Carlton & United Breweries launched its last white-spirit RTD, Sub Zero. Actual comes in two varieties: pure and lime. The former is nothing but vodka and soda, while the later includes lime juice (not extract or flavour, like most other seltzers) making it vodka, lime and soda by a different name. Get Actual at Liquorland.

Brookvale Union
Brookvale Union is an offshoot of Sydney brewery 4 Pines, which is itself owned by Carlton & United Breweries. Brookvale makes a handful of fun premix drinks, now including two seltzers: grapefruit and lime and orange bitters. Grab some at Liquorland or First Choice.

Coast
Brewed in the Victorian surf town of Torquay (and with some of the cheeriest labels out there), it’s Coast, a sub-brand from Blackman’s Brewery. Roll with these guys and you’re picking from watermelon, blood orange, lime or an extra-refreshing cucumber and mint, all sitting at four per cent ABV. Buy direct here or find a physical stockist (Victoria only at the moment).

Nosh Boozy Seltzer
Starting a brewery ain’t cheap. When young craft breweries and distilleries need extra startup cash, it’s often Founders First that pops up to buy a stake in the business and provide some capital. Nosh is a 50/50 partnership between Founders First and Nick Cogger, the Torquay-based founder of K.Booch, an alcoholic kombucha. There are two flavours: peach, and mango and pineapple. Both are five per cent ABV. Find Nosh at Dan Murphy’s or BWS.

Saintly
Created by Sydney-based duo Kieron and Christian Barton, the team behind Rekorderlig cider in Australia, Saintly offers four zero-sugar flavours: mango, watermelon and mint, lime, and pink grapefruit. The first two flavours are both four per cent ABV, and the latter two are six per cent ABV. Find them at Dan Murphy’s or BWS.

Splash
Neighbours star Olympia Valance and another actor, Jeff Gobbels, launched Splash earlier this year. This seltzer is 4.5 per cent ABV and comes in two flavours: raspberry and lime. Buy it at Dan Murphy’s or BWS.

Smirnoff Seltzer
There was zero chance the people who brought us Smirnoff Ice and Double Black would let the seltzer trend pass them by. They’re on board with three zero-sugar, five per cent ABV varieties: lime, passionfruit and raspberry rosé. Find them at Dan Murphy’s or BWS.

Hint
Feijoa, watermelon or citrus are your choices with this Kiwi brand, which uses triple-distilled vodka rather than the brew method. The cans are five per cent ABV. Pick it up at Dan Murphy’s or BWS.

Update (2pm, October 16): a previous version of this article incorrectly stated that Saintly is associated with the Swedish brand Rekorderlig.