No, really. Many viral food “hacks” don’t live up to the hype, or flat out just don’t work. But after rigorous testing, we think this under-the-radar juicing trick could make it big. With nothing but a skewer and a firm hand, it produces zingy, pip-free lemon juice in seconds. 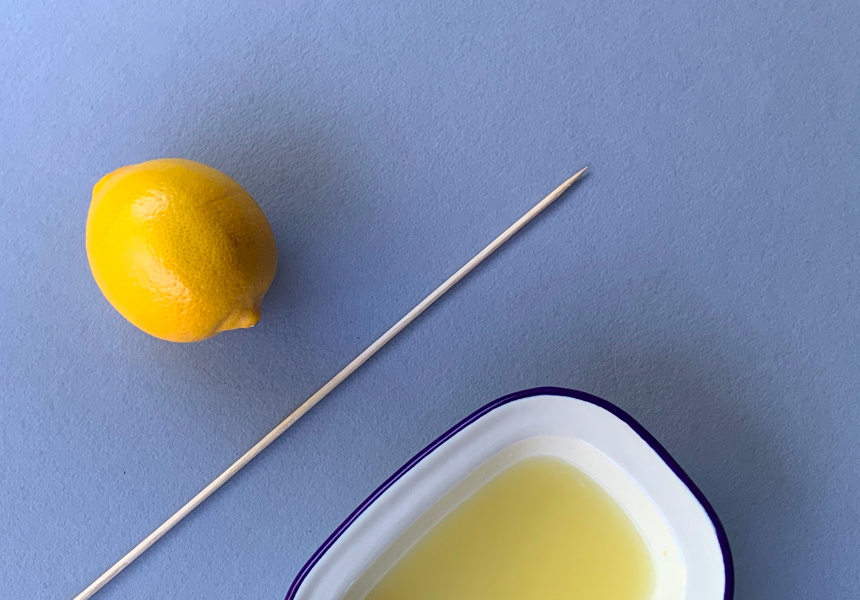 I’m pleased to report that shamefully downloading Tiktok in the depths of lockdown has yielded something life-enriching.

As I was mindlessly swiping through the app’s “For You” page, I came across this video, which I watched on loop for a solid five minutes.

The gist: all you need to juice a lemon is a skewer and a firm hand. I was intrigued, but sceptical. At Broadsheet, we take these sorts of hacks with a Salt Bae-sized pinch of salt. And for good reason.

Remember that viral video of a knife sliding into a full head of garlic and popping out clove after clove? Mostly BS. Jamie Oliver’s suggestion to turn your toaster on its side to make a melted-cheese sandwich? Highly dangerous, according to the London Fire Brigade.

On her Youtube channel How to Cook That, Melbourne-based cook Ann Reardon has recently begun debunking bogus food hacks such as these, garnering millions of views. Sadly, she doesn’t seem to have covered this one yet.

With no concrete evidence about the merits of the lemon-juicing hack, I only have one logical course of action: buy a lemon and give it a skewering.

First, I subject the lemon to a few firm, rolling-pin-style motions with my hand, to loosen the juice inside.

Then, with a wooden skewer, I pierce the lemon’s nipple-like end and stop just short of kebab-ing it. (This is crucial. Otherwise, you’ll end up with an unruly, two-pronged lemon fountain. I learned the hard way.)

I remove the skewer and start squeezing the lemon with a full fist. After a few pulses: nothing. Has the internet done me dirty? I continue.

Then, almost out of nowhere, a jet of lemon juice. And another. As the bowl starts to fill, I realise this is the closest I’ll probably ever come to milking a cow – the lemon like an udder, the juice like fresh milk.

The ridiculously simple skewer method produces 50 millilitres of zingy, pip-free lemon juice. And it’s just as effective when I try it with a metal skewer and a sharp-pointed chopstick.

For comparison, I roll and juice an identically sized lemon with a citrus squeezer and it produces just 43 millilitres.

The pros
• No need for a citrus squeezer, reamer, handheld lever press or any other juicing contraption.
• Marginally more liquid for your labour (seven millilitres, in this case).
• Increased capacity for on-the-go juicing.
• Less chance of pesky pip slips in salad dressings, marinades, teas, cocktails et al.
• A great alternative to finger-straining said pips.
• Works just as well with limes.
• A use for skewers that isn’t cooking shish kebabs, checking if your cake is properly baked or opening your phone’s sim-card slot.
• Decreased Tiktok-related self-loathing.

The cons
• Unsuitable for juicing in large quantities (RSI may result).
• Significantly less effective with oranges.