Anchovy Bandit head chef Michael Henderson is dedicated to the fresh pasta cause, and he wants you to know it’s well worth the mess. In partnership with Mastercard, he told us all the details behind his pasta masterclasses. 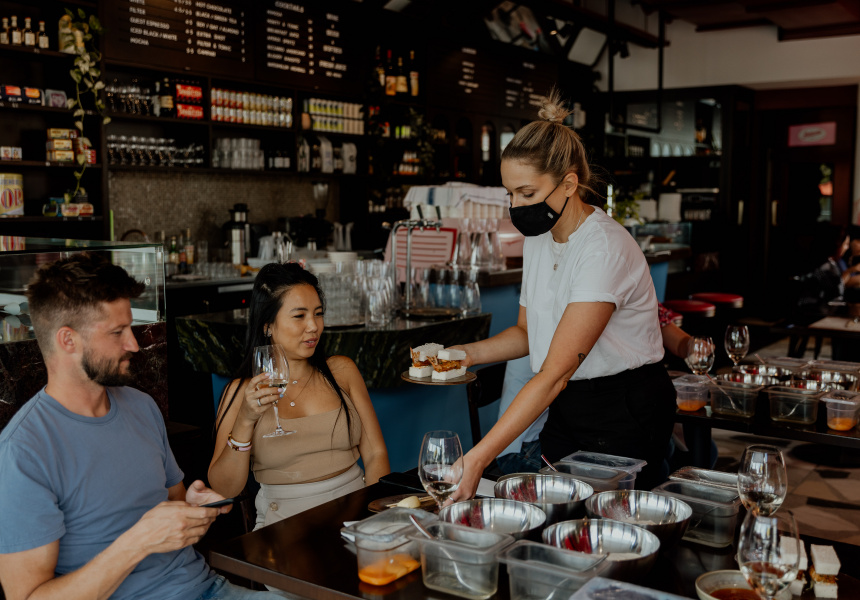 Anchovy Bandit head chef Michael Henderson is a disciple of pasta-making. “Pasta is a really ancient form of cookery,” he says.

Henderson’s passion for pasta has grown since joining Anchovy Bandit, a neighbourhood pasta bar and pizzeria in Prospect, where he and fellow chef Shane Wilson not only serve up bowls of starchy goodness, but also teach customers how to make it at home. The masterclass is one of the unique experiences that Mastercard cardholders can access via Priceless.com.

Making pasta “is actually quite scientific,” says Henderson, who is known to spend time researching “all the different shapes of pasta, and all of the rules that all these nonnas have come up with over these years.” He covers some of this science in the class: “How to create gluten structure and how it breaks down, how mouthfeel is with different types of flours, and how different eggs change it, and water content. [That’s] before you even talk about sauce, [and] you can talk for hours about it.”

Upon arrival at the class, guests are handed a cocktail – a seasonal Bellini or a spritz – before heading to the Bottega Bandito space for a round of snacks – like beef tartare on hash browns or a prawn sando with fermented chilli butter.

Once the class is underway, Henderson teaches participants how to make Anchovy Bandit’s whole egg yolk pasta dough, a special house recipe. “Everyone gets a bit messy,” he says, as they learn to make pappardelle – an easy one to reproduce at home – and agnolotti, which can be a little tricker. “If you can pull that one off, it’s a really cool show stopper to pull out for a dinner party.”

The class pauses halfway for a drink on the terrace, which gives Henderson and his team time to set the table for a three-course dinner. At the end of the night, everyone takes their ball of dough home in a goodie bag, ready to transform into tomorrow night’s dinner.

A common misconception about making fresh pasta is that it’s complicated. In truth, says Henderson, “It’s not difficult at all.” It is, however, again, very messy. “As long as you’re happy to clean up a bit of mess at home, literally all you need is flour, eggs, and water. Everybody has [those ingredients] in their pantries,” he says. “It’s that simple.”

People use dried pasta for the convenience, but Henderson says making your own pasta is absolutely worth “the time and the love that you put into it. The quality is so much better,” he says. “The pasta itself actually has flavour … it’s silky and smooth and has mouthfeel.”

And then there’s the ritual that comes with making pasta from scratch.

“I always pass on to the people in the class that this is something you can do with someone else. This can be a date night. This can be spending time with your children. This can be a family tradition that you’re now starting, and that’s super fun.”

On his days off, Henderson and his wife make tortellini or agnolotti together. When the pandemic saw Henderson unexpectedly become a stay-at-home husband for a while, cooking at home became a lifeline. “We’d have themed nights” – like pasta night – “and we would cook together to keep ourselves sane,” he says.

“As a chef, I’m super lucky to be able to find something that is my hobby and my passion on my days off, and then I can also do it at work. Sharing that with your loved one is pretty killer.”

This article is produced by Broadsheet in partnership with Mastercard. Mastercard cardholders can learn to make pasta from scratch with Anchovy Bandit’s Michael Henderson, or sign up to Mastercard Priceless today.