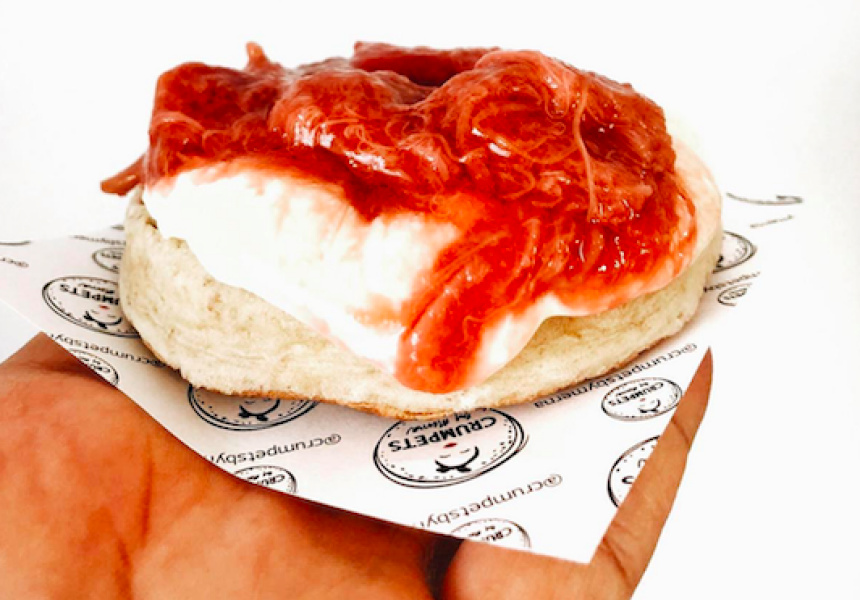 Earlier this week we reported that cult Sydney butter producer and Broadsheet Sydney Pantry essential Pepe Saya joined forces with its sister business, Crumpets by Merna, to create what we reckon is an ace breakfast box.

For $35, you get a sixpack of Merna’s handmade fermented sourdough crumpets, six 15-gram packages of Pepe’s rich and creamy churned butter to spread thick on your hot crumpets, a tub of Pepe crème fraîche and a jar of lemon curd to top it off for the ultimate morning snack. But, because of overwhelming demand, it's run out of the tart lemon spread. In its place is now rhubarb stewed with whole vanilla beans in a jar with a hand-written label.

"We rang our local fruiterer, F.Galluzzo in [Sydney's] Glebe, and asked him what was in season. He told us rhubarb. When we asked him what they were like he said 'glamorous'. So we made this rhubarb fresh today, and will be making another batch tomorrow morning. It is a match made in heaven with crème fraiche and a crumpet, so you will not be disappointed."

For the uninitiated, Pepe Saya isn’t your average butter. It’s made in a warehouse in Sydney by a team of 20 butter-makers who churn out 12 tonnes of butter each week. The cream they use is sourced from farms in Picton, Wauchope and the Hunter Valley in NSW, and Gippsland and Allansford in Victoria. First it’s matured, then a lactic live culture is added. After that, the cream is fermented for 24 hours, and then aged for up to four weeks. Once ripened, the cream is hand-churned in a batch (not industrial) churn.

The crumpets are equally artisan. They're made with (of course) Pepe Saya buttermilk and wholemeal flour in small batches.

Breakfast boxes are available via Pepe Saya and Crumpets by Merna. You can get them delivered anywhere in Australia for a $20 delivery fee. There's free delivery for orders over $50