I Can’t Isolate Without: These Addictive, Twisted Italian Breadsticks

One Broadsheet editor has a filthy pack-a-day habit for these edible swizzle sticks. They’re the ultimate standalone snack – unlike Jatz, or grissini, or those bougie supermarket crackers – but they won’t be making it into the office when this is all over. Here’s why. 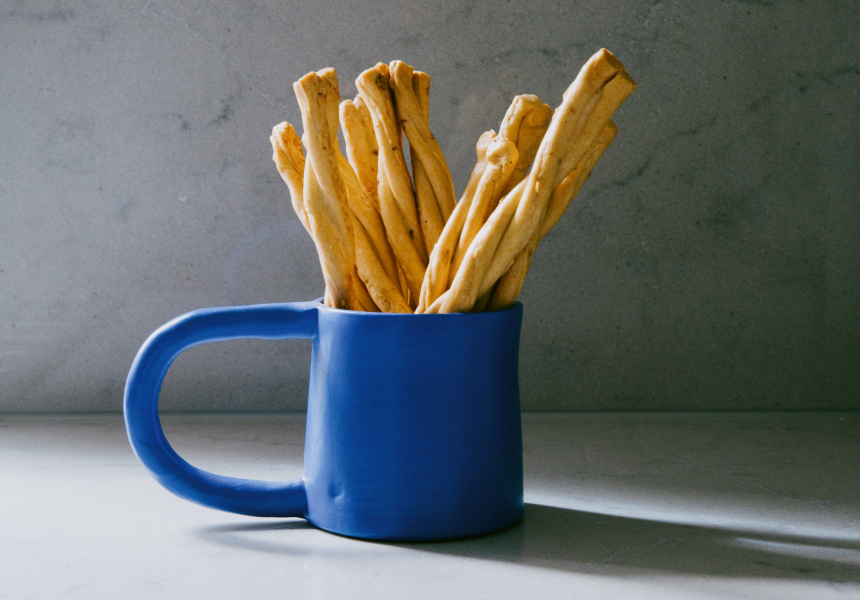 There are no greater crackers than taralli. The doughnut-shaped Italian snack is similar in texture to a breadstick, and exists in most of my childhood memories – I dunked mine in lemonade, while the grown-ups dunked theirs in wine. Taralli have accompanied me in snap-lock bags on all my travels since. (Come to think of it, I’ve never heard them referred to in the singular (tarallo?) because having just one isn’t the Italian way.)

I recently discovered these twisted taralli-like breadsticks called Colacchio’s Treccine. At first taste, the flavour was immediately familiar and I experienced what can only be described as a textural awakening; I immediately sensed a spike in my iso quality of life.

Each breadstick is made of two smaller sticks woven together to form a braid – hence the name, which means “braid” in Italian. They’re about as twisted as the world is right now.

These wonky, misshapen times have most of us working from home and I, for one, feel like my productivity is constantly under attack – from my cat angling for a Google Hangouts cameo, from the lure of a new set of Bed Threads linen, from my brother’s tendency toward mid-afternoon baking.

But I’ll tell you what’s not a productivity threat: an easy, snatch-and-grab desk snack.

And these edible swizzle sticks require no preparation or accompaniment. You could say they’re best served in isolation (get it?). Unlike Jatz, which crave a swipe of taramasalata. Or grissini, which are far too dry if not encased in mortadella. Or those bougie cashew and rosemary crackers, which are really but a vessel for cheese.

Colacchio’s Treccine are oily enough to resist dryness, dry enough to maintain crispness, and crisp enough – I’m ashamed to say – to have caused me more than one jaw ache. They’re the ultimate standalone snack. My flavour of choice is fennel, but they also come in olive oil and chilli, potato and rosemary, and onion and olive.

I’m a sucker for these things, but there are three reasons why they won’t be making it into my office snack rotation once all this is over. First, because a crumb-littered keyboard is not a professional power move. Second, because I’m painfully aware of the damage that obnoxiously loud chomping can do to interpersonal office relationships, especially after the side-eye I got for the Audible Almond Incident. And third, for fears of a raided stash, most likely by the fellow Italian who usually sits behind me (I’m looking at you, Steph).

It’s clear they’re for the home office – aka kitchen table – only, despite the overconsumption that comes with navigating this new WFH normal. But to that I say: let it happen.

“I Can’t Isolate Without” is a Broadsheet series celebrating the small things getting us through lockdown. Find out what our Sydney editor Sarah Norris can't isolate without here.