How to Pair Cocktails with Spicy Food

Upgrade from a glass of milk. If you’re after creative, complex cocktails, here’s a tip: head for a restaurant where the cuisine is big and punchy.

“Because cocktails have more clearly identifiable flavours, and are more flavour-packed than, say, wine, they can match and stand up against big flavours in food.”

Like all food and drink pairings, the most important thing is to complement and balance the main taste. With spicy, rich food such as coconut-cream-based curries, it’s important to choose a cocktail that has acidity (such as citrus) to cut through the richness – “The same way we put acid on top of other dishes, like lemon on fish,” Welniak says.

With food that’s just plain spicy, Welniak recommends a cocktail that’s either fruit-based or slightly sweet. “Fruit and sugar help to counterbalance the spice,” he says, “but you don’t want to go too sweet, otherwise it will accentuate the wrong tones. Generally, it’s best to go with something with a little bit of acid and a little bit of sweetness when eating something spicy.”

Josie Blanchard, World Class Top 100 bartender and manager at Lazy Susan’s Eating House in Darwin, agrees that lighter, citrus-forward cocktails pair well with dishes with a lot of chilli – for example, Thai food. But for dishes full of heavy spices, such as cloves, cinnamon or Szechuan pepper – found in Indian cuisine – a cocktail made with dark spirits stands up better.

“Dark spirits with a bit of sugar work well with heavier dishes. It’s important to consider the weight of the dish as well as the spice,” she says. “But everyone’s palate is different, so there’s not a blanket rule for everyone.”

Blanchard likes to pair her restaurant’s prawn toast with its Last Samurai cocktail. It’s made with Tanqueray gin, Choya plum wine, ruby grapefruit, lemongrass and tonic, and pairs beautifully with the spice and fresh local herbs that are on the toast. Another excellent match is the spicy twice-cooked pork belly and Fu Manchu Mule, made with Ketel One vodka, ginger, fresh lime, ginger beer and yuzu liqueur.

As for Welniak, his favourite cocktail to pair with spicy food is the Circa 1920 Gin Flip. It goes particularly well with Longrain’s oysters with red chilli nahm jim. If you’re making this at home, Welniak recommends cooking Pad Thai, because the flavours (lime, sugar, fish sauce and so on) resonate with the cocktail. Spiced game meats, such as duck, would also work well.

Method:
Add all the ingredients to a cocktail shaker and shake to combine. Add ice and shake again. Double strain into a coupe glass and garnish with burnt orange rind**.

*To make the Earl Grey syrup: Steep 9 teaspoons of Earl Grey tea leaves in 500ml hot water for 6 minutes. Strain and stir in sugar to a 2:1 ratio. Allow to cool before using.

**To make the burnt-orange garnish: Apply a flame to a piece of orange peel until lightly burnt. 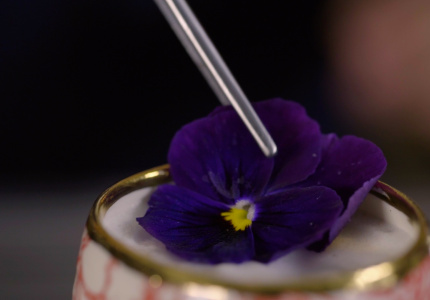