How to Make Your Own Sourdough Bread at Home

The experts weigh in on this difficult art. 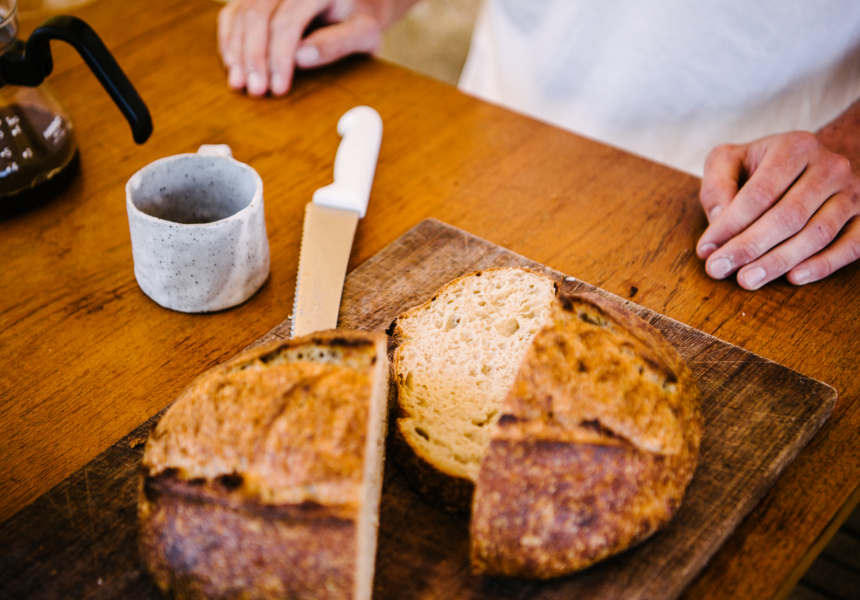 “You have to let the bread-making find its way into your life,” my friend Duncan Reid philosophically advised me when I first began playing around with a bread starter, hoping to produce beautifully risen loaves at home. “Sourdough is a rhythm. You’ll get it, eventually.”

Over the next few months, I found myself rising at 2am to fold and turn dough, carting fermenting bread to a friend’s house in the backseat of my car so I remember to feed it, and generally failing to integrate sourdough into my rhythm. All the while, producing tasty but average-looking, deflated breads. If you’ve ever attempted sourdough breadmaking, you’ll know there are countless factors – weather, oven temperature, flour type – that make or break a loaf. For guidance, I’m working with Sourdough by Norwegian home bakers Casper Lugg and Martin Fjeld, which covers the basics of making a starter, feeding it, creating a dough, folding and turning and proofing, and baking bread – while also acknowledging the limitations of a non-professional kitchen.

Although my initial starter (a small-batch mixture of flour and water, naturally fermented) finally expired after several missed feedings, I’m not giving up hope. But before launching another attempt at breadmaking, I’ve sought expert advice from two local sourdough stars. Reid is a breadmaking hobbyist (and part of the team at Adelaide Hills winery Commune of Buttons and barista at Sibling and Monday’s Coffee) whose perfectly-crusty-outside, chewy-inside loaves are the highlight of every picnic here in the Adelaide Hills. Also, Emily Salkeld of Small World Bakery in Langhorne Creek, one of the few commercial bakeries that grows and mills its own grains. Salkeld and partner Chris Duffy sell their bread and flour at the Willunga Farmer’s Market on Saturdays.

I ask Reid and Salkeld their advice on getting into the “sourdough rhythm” at home, because baking these loaves is about so much more than a great recipe.

Let’s start by talking starter cultures: where do I get one, and how do I keep it healthy?

Emily Salkeld: I don’t believe in buying starters; a starter is something that should be given away. It doesn’t matter if you create your own or get it from another baker, as long as it’s active and fairly recently refreshed and has been in a routine of daily refreshment, it’s fine. After a few generations, that starter is yours – it doesn’t have much of the old starter in it.

You have to commit to your starter [i.e., feed it with carefully measured flour and water at regular intervals] if you want it to perform. You’re going to have to feed it daily, but you only need a thumbnail size [to bake with], and you can discard the rest. You don’t need to buy a lot of flour to keep it maintained. And the excess can go into anything you’re baking – scones, cakes, pasta. A lot of people also feed it to the chooks or bury it in the garden. But you only need 20 per cent of the starter to maintain it; when I go traveling, I take a tiny cliplock container that’s 4 to 5 centimetres squared, and I use a teaspoon to feed it.

The more frequently you bake, the better you get to know your starter and understand how the things you’ve changed affect the end result. The key to that is taking good notes.

In any fermentation process, there is a population of yeasts and bacteria. Each strain has its own ideal temperature and timing [i.e., certain conditions will grow different strains more successfully, giving the end product different qualities]. When you’re feeding a sourdough starter daily, you’re selecting a population that will perform the best in those parameters. Whatever bacteria doesn’t make it through the period between feedings, doesn’t survive; you’re stopping them from reproducing. It will be as erratic as you – if you’re reliable and kind to it and feed it in lovely ambient temperatures, it’s going to perform for you.

Duncan Reid: I keep my starter in the fridge when I’m away from home, to be honest. I don’t want to take it with me. Sometimes you forget to feed it for a few days. In the fridge it’s maybe not as healthy, but it’s okay.

When I’m feeding my starter, I use a small bowl – rather than a glass jar – and cover it with a little plate, as I find it easier to clean. I also keep my starter really small. 1:2:2 – one part starter, two parts flour, two parts water. You can just use 10 grams of starter. You’re trying to give it enough food for it to last 12 hours without becoming very acidic.

How should home bakers select flour, with environmental concerns and functionality in mind?

ES: Start with a proportion of your flour as stone-ground, wholegrain flour in every dough. Fresh, stone-milled flour will bring more activity to your starter. Don’t try to make it 100 per cent stone ground, wholegrain right away if you’re used to white flour. [White flour] has had the germ and bran mostly removed; those are the two things that affect functionality of flour, and shelf life. They were removed for longer shelf life, but this refining also takes away [the flour’s] identity and character. But that’s how it’s got to be for some people, particularly home bakers. If you can find out when your flour was milled, even better. In a health food shop, look for the bag where the bulk bin has been filled to find the date and try to get local flour.

DR: White organic baker’s flour and Demeter unbleached stone-ground baker’s flour, is what I use. Then I mill my own wholemeal with grain from Four Leaf. I generally do 50/50 [ratio of] wholegrain to white flour. I like the flavour and nutrition of wholemeal, but I don’t want it to be too dense either. It’s an easy ratio to remember.

What are the really crucial pieces of equipment for first-time bakers to have?

ES: A probe thermometer is really useful to check your tap water. Fingers are deceptive; your body temperature changes. If you write down the temperature of the water, you can observe patterns. Also for your dough temperature, if you work with 21 to 28 degree parameters, it will work every time. Twenty-one for a longer ferment; or 28 works fairly quickly.

DR: An electronic kitchen scale. It’s vital. If you guess, it’s so difficult to tell why something’s gone wrong. Then a nice Dutch oven. My oven doesn’t seal properly so I have to use one of these. Also, a good dough scraper – it makes cleaning up easier. You don’t need a fancy Banneton proving basket – you can use a bowl when you’re starting out. Buy some good flour, have a good starter and you’ll have good bread. I don’t even have a scoring knife; I use a chopstick with a shaving razor blade that I bought online.

What is your advice for people attempting their first loaves, and tips on finding a good basic recipe?

ES: In summer, when you’re feeding your starter and it’s out of control, you might not get to it before it’s way past its peak [i.e. too fermented]. You get a change in the flavor – an unbalanced flavor – and there are a lot of organic acids present that will break down the fermenting dough a little faster. It’s not a total disaster, just less than ideal. You want it at peak for a nice, ideal fermentation. When you’re feeding it, add one per cent of the flour component of salt. Salt doesn’t kill yeast, it just slows the reproduction. Then you’ll need to adjust the salt in the final dough, by that amount. And if you’re going away for three months, just ditch your starter or give it to a friend.

Also, using tap water is fine. And [for your starter culture] you can just use any sealed container so stuff doesn’t fall in, it doesn’t have to be exposed to air. Plastic or glass, doesn’t matter.

In terms of books: When I was starting out, I relied on Tivoli Road Baker [by Michael and Pippa James], from Melbourne. They’ve got this gorgeous postcard in the middle of their book, with instructions on how to begin and maintain a starter, so you can just pin it to the fridge. I also like Bread by Jeffrey Hammelman, from Vermont in the US. That’s a classic one with lots of formulations to try when you’re past beginner’s level.

DR: It’s about making the bread work for you. You don’t want to be a slave to the process; you want some nice bread that you baked yourself. Some people get really caught up – they read a book and they think they need to be there for four hours, turning every half hour, then proof it and bake it. That’s my whole day. What if I need to go to the shops?

When you’re starting out, bake the same loaf [i.e. use the same recipe, repeatedly]. You learn a lot more if you’re working with the same dough. Don’t change too many variables at first. Then you’ll learn how it should feel. You’ll make heaps of bad loaves at first! I tweak [my approach] a lot; it’s about seeing what effects these changes have, and it’s also about finding ways to make the bread in a short time with the least amount of effort.

And don’t underestimate the importance of how healthy your starter is. You can feed it once a day, or even keep it in the fridge sometimes, but you want to see it double or ideally triple in eight hours. Also, I find it easier to have slightly stiffer dough; if it’s too liquidy it can be gassy or bubbly, and then it’s harder to judge.

I actually don’t have any bread books! I rely on the internet. Videos are really helpful. On YouTube, there’s Alex French Guy Cooking – he’s got a good method; there’s also Joshua Weissman. I tend to select one technique from these videos to incorporate into what I’m already doing. And there’s a forum called The Fresh Loaf, where people are really encouraging, and you can troubleshoot your bread and share photos.