Neil Perry’s hospitality empire is hibernating, but the kitchens in two of its best restaurants are busy churning out thousands of meals a week. The goal is to feed 2000 people a day in Melbourne and Sydney. Here’s how you can help. 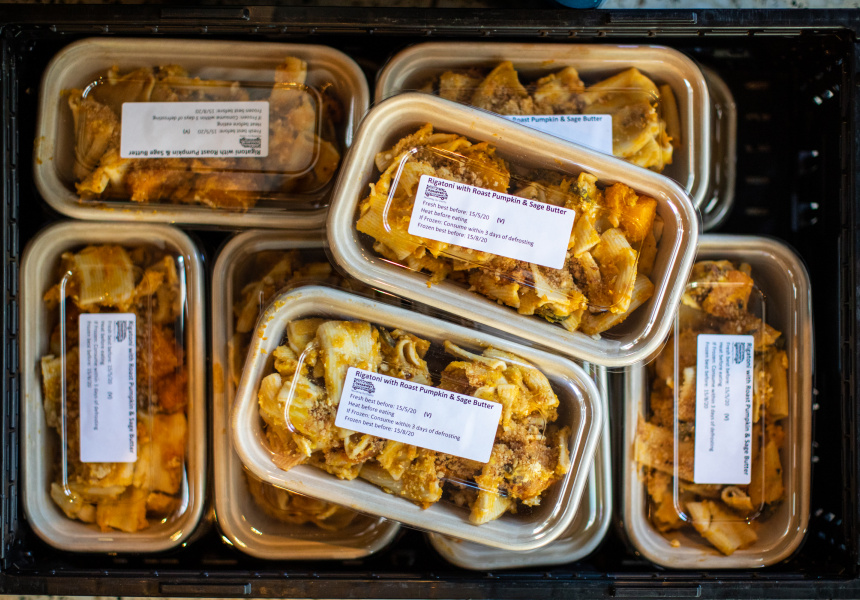 Australia’s hospitality industry has been hit hard by the Covid-19 crisis. Thousands of international workers have not only lost work, they’ve also missed out on much-needed government support.

“Since they have no safety net at all from the government, a lot of them are really struggling,” says chef Neil Perry, who’s behind a string of high-profile restaurants including the Rockpool Bar & Grill in Melbourne and Rosetta in Sydney.

“At Rockpool Dining Group we’ve got a lot of visa workers,” he says. “We’re hearing and understanding what they’re saying, and we know it’s tough. It was important to show them we care.”

To help those workers – and others, including students, in the community in need – Rockpool recently launched a charitable food-delivery service, operating out of the idle kitchens in its flagship Melbourne and Sydney restaurants.

Dubbed Hope Delivery, the service aims to feed around 2000 people a day in both cities over the next six months. Perry has gathered together a team of head chefs, restaurant managers and volunteers to prepare nutritious food, which can be collected by visa-holders or will otherwise be distributed by food-rescue charity OzHarvest.

Each meal costs around $2.50 to make, so to keep Hope Delivery running will require around $35,000 a week. And Perry is calling on government, businesses and the public to chip in.

In a statement announcing the initiative, he was adamant: “We bear responsibility to look after all those who are in our borders, especially in this time of uncertainty, and the simple act of feeding them is the least we can do.”

The ready-to-heat meals (which include pastas, curries and meat mains) are made with excess produce from the temporarily shuttered restaurants. Around 40 per cent of the meals are vegetarian, and there are halal options too.

“It’s the stuff we use in our restaurants,” says Perry, who hopes the service will also support Australian fruit and vegetable farmers, as well as producers of meat, poultry and seafood – many of whom have experienced financial loses due to decreased demand from restaurants.

Donations are tax deductible and can be made through the Rockpool Foundation from Friday May 8. In the meantime email hopedelivery@rockpool.com for more information.