It sold more than half a million copies and gave parents nightmares. Now it has a new edition with a revamped train-cake cover – but inside you’ll find the exact same photos and recipes you remember from your childhood. 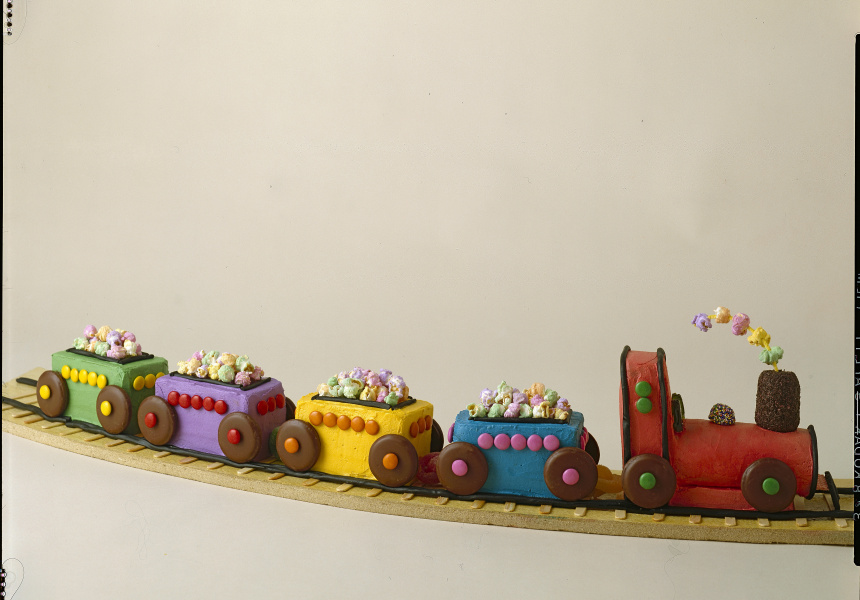 It was the stuff of children’s dreams (and cause for parents’ headaches): the jelly pool, the Dolly Varden skirt, the rubber ducky with the crinkle-cut-chip beak. For some kids, the best part of their birthday was blowing out the candle on a quirky (and maybe even a little lopsided) cake made by mum and dad.

“Every year my kids pored over the cake book, even months before their actual birthday,” Frances Abdallaoui, food director for the Australian Women’s Weekly (AWW) tells Broadsheet. “We didn’t have sticky notes, so they’d fold down a corner of the page or write down a list. I’ve probably made dozens of them over the years.”

Abdallaoui isn’t the only one. It’s been 40 years since AWW released the original Children’s Birthday Cake Book, which eventually went on to sell more than half a million copies worldwide. The retro cover featured a red and blue train cake decorated with coloured popcorn, and inside were pictures of dozens of birthday cakes, many of which had easy instructions that called for boxed cake mix and pre-made icing.

To mark this milestone, the AWW has released a 40th anniversary edition with a flashy new train cover – but inside everything is still the same.

“I think that’s the beauty of the book – because it’s iconic, you don’t actually want to change it. It’s what people remember, and it’s just a generational thing. In some families the book’s been handed down from mums to their children; pages are stuck together with icing and all those lovely things. It’s a very well-loved book,” Abdallaoui says.

None of the recipes have been rewritten and the cakes haven’t been reshot, so the styling and photography remains simple and nostalgic. Cake mixes, frostings and the lollies used to decorate might not be the same as they were in 1980 (some of the sweets have been discontinued), but part of the charm of the recipes lies in how easy it can be to improvise and adapt.

“The cleverness of the cakes really lies in their simplicity. It has basic step-by-step guides, and the reassurance of a good packet mix basically means a guaranteed result. They’re all about your interpretation, and it does encourage the maker’s creativity to change or tweak,” Abdallaoui says.

It’s an approach New Zealand Prime Minister Jacinda Ardern recently took, when she posted a photo of her creation of the piano cake for her daughter Neve’s birthday. “Cake-making lesson number two – don’t focus on making the cake look in proportion, with little to no attention on structural integrity ... there is a jar of lentils propping this thing up,” she wrote.

The cake book has more than 50 recipes across five sections: find the echidna ice-cream cake in Animals and Creatures; a coconut-covered cricket pitch in Playtime; keep things smart and simple with the Smarties-coated Numbers; build a castle from the Fantasy section; and find loads more ideas in For Everyone.

AWW has released other, more modern cake books since 1980, but none have captured the imagination of kids across Australia quite like the original.

“Even today a lot of the cakes – ones like the telephone or the typewriter – kids have probably never seen because they’re so old-fashioned now, but it has that fabulous retro quality to it,” Abdallaoui says. “I think it just has a magical quality that resonates through generations.”

The Children’s Birthday Cake Book, 40th Anniversary Edition (RRP $19.99) is available online, in newsagents and supermarkets today. It will be in bookstores on August 18.