The champagne industry has long been dominated by the same big names, all striving for consistency in bottle, rather than individuality. But now upstart small growers are returning to the old ways, reminding the world that champagnes can – and should – have distinct personalities too. In the process, they’re changing the very future of the storied drink. 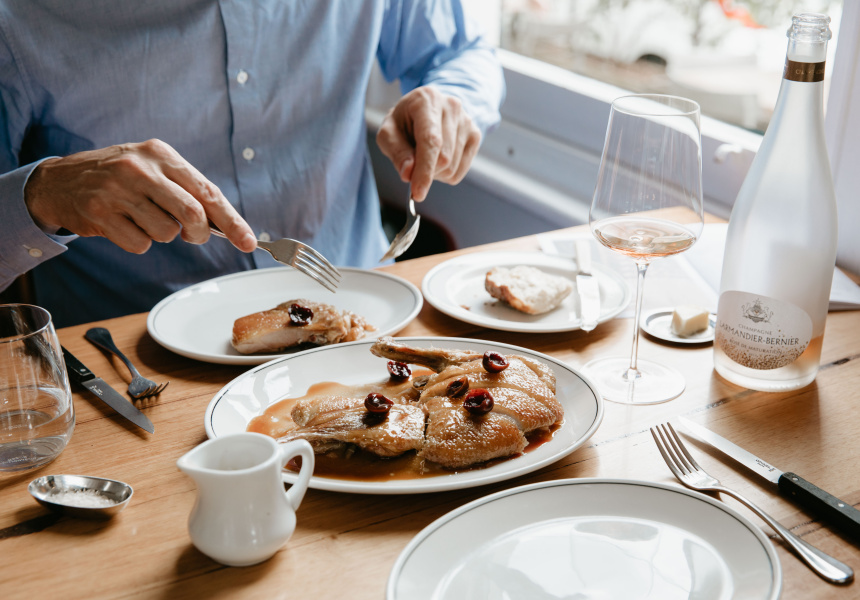 Drinking champagne has never just been about taste. It’s about toasting a new year, splashing out after a promotion or raising a glass to a milestone birthday. When you have something to celebrate, you drink champagne.

The 24 big champagne houses (grande marques) – your Moets, Veuves and Mumms – have cultivated this association with great care over the past 200-odd years. Their marketing, when it’s not speaking to luxury and exclusivity, is about selling special occasions in a bottle.

It takes many hands to bring this idealised, high-volume product to life. All the famous champagnes are blends, made by buying grapes from as many as 80 contract growers from all over the 25,000 square-kilometre region, in order to supplement the smaller production at the grande marques’ own vineyards. These champagnes are consistent from year to year, but their distinctive tastes arise in the winery, not the ground.

But there’s another type of champagne. One that’s never really marketed itself. It’s been around for just as long as the big names, but is only now getting the attention it deserves.

“The idea of champagne is that it’s always a blend,” says Sophie Larmandier. “For us it’s totally different: we grow our own fruit from our own vineyard and we only have 18 hectares. So the idea is not to blend, the idea is to show place.”

Larmandier and her husband Pierre run Larmandier-Bernier, one of the best-known and most-acclaimed “grower” champagne houses. Grower champagnes are those made by the people who grow the grapes. They handle the entire process, start to finish. It doesn’t sound revolutionary. It’s how thousands – maybe tens of thousands – of wineries around the world operate. But Champagne isn’t like anywhere else in the world. In Champagne – a region that’s inextricable from its proud traditions – grower champagne is radical.

Bubbles practically course through the couple’s veins. Pierre is “at minimum the seventh generation” in his family to grow and make champagne. Sophie, meanwhile, is from Avize, the heartland of champagne houses such as Moet and Veuve.

The Larmandiers and their peers want to show people that champagne is about more than just being the world’s go-to festive drink – it can also be a diverse-tasting, terroir-driven wine in its own right, worth seeking out regardless of the occasion.

“It’s a new story in champagne. In the ’90s when we started the domaine the grande marques were always talking about celebration and bubbles and luxury and secret recipes of dosage [added sugar] – but never about terroir,” Sophie says. “You couldn’t even guess the champagne was made with grapes and that’s totally different for us because it’s the grapes that make the quality, we try to do our best not to ruin this quality.”

At surface level, terroir is about how the unique environmental factors of where a grape is grown – soil, altitude, climate – affect how it tastes in bottle. It’s why two wines of the same varietal grown even just five kilometres apart from one another can taste different.

On a more profound level, terroir is a grower’s story: the story of what makes their parcels of land special. Big-name champagnes may express a vague regional terroir, but nothing more.

It was only after a late-’80s trip to Burgundy, renowned for its pinot noirs, that Pierre resolved to bring old-school winemaking practices back to the very new-school Champagne.

“In Burgundy it was all about the place, the growers were much more famous than the big names,” Pierre says. “In Champagne it was different, they were selling top cuvees but it was never really about terroir.”

The Larmandiers were also impressed with how the vineyards were being farmed down south.

“There is a direct link between the way you cultivate and the taste in your glass, and that’s what we learned in Burgundy,” adds Sophie. “Because we went to visit great domaines and we watched how they were working – we tasted the wine and then we couldn’t go back.

“The common point was no herbicide,” Pierre says. “Just cultivate the soil. Organic or not, biodynamic or not, but the big point was to respect the soil.”

The couple farms their vineyards biodynamically; slow-ferments their wines using indigenous yeasts that occur on the grapes’ skins; and adds very little sulphur, the preservative that’s used to stabilise almost all present-day wines.

But why did Champagne forget the old ways in the first place? Why did it give up on terroir, and give in to chemically-assisted farming?

One: following the devastation of the World War II, the French population was hungry. The government mandated that farmers ought to grow as much food as possible, using whatever means necessary. This was a fundamental shift in French agricultural practice, and made its way even into winemaking philosophy. Mass production was in.

Two: why prioritise terroir when you’re supplying a big champagne label that’s just going to blend your grapes with others? If you’re a grower, you’re better off focusing on yield.

“Little by little, all the bon sens paysan (rural common sense) was totally lost,” says Sophie. “People sell it to you as progress – herbicide, big tractors, you can go that fast, you can have this many tools – and they don’t realise that the heavier the tractor is, the more compaction in your soil, so the roots cannot breathe anymore. And herbicide kills all the microrganisms, which are necessary to make the link between the soil and the plant, so little by little you just have superficial roots and then you have disease.

“They also sell you chemicals, pesticide so that your vineyards are safe. Okay, now you are safe but there’s no more spontaneous fermentation [fermentation through wild, naturally occurring yeast]. So then they sell you yeast, and again and again …”

Although the Larmandiers didn’t instigate the grower champagne revolution (they were about 10 years behind Anselme Selosse, Francis Egly and Jerome Prevost – which is about two minutes in Champagne years), they’ve become one of the movement’s most-important torchbearers. Why? Because Larmandier-Bernier champagnes taste fantastic, and tend to convert those who try them.

They certainly converted me. Most times when I drink champagne, one or two glasses will do me. That soft mouthfeel and enduring fizziness get to be a bit much. Larmandier-Bernier champagnes are different – ludicrously drinkable regardless of whether you’re at a black tie event or you’re having a midweek dinner on the couch.

There are two main wines: Latitude and Longitude. The former is more mineral-driven, while the latter displays beautiful fruit. These are absolutely special occasion wines, but you’d be doing yourself a disservice if you only drank them when you’re celebrating. Drinking a great bottle of champagne is a special occasion, in and of itself. Pierre and Sophie naturally agree.

“In Champagne, you drink champagne all the time,” he says.

“Nearly every day for us, it’s an everyday drink,” she adds.

The grower champagne movement has been bubbling up to the surface for 25 years, but now it’s finally starting to take centre stage. Its people started out as radicals, but now they’re changing the mainstream: Moet recently committed to ending its use of herbicides in its vineyards and GH Mumm introduced a “grower series” in the United States.

A larger-scale return to the old winemaking ways is a success for anyone who thinks about viticulture the way the Larmandiers do. But for them, taste and personal enjoyment is what matter most: “We think the best rating is an empty bottle.”

Larmandier-Bernier Latitude Blanc de Blancs NV
Pure and mineral, this, like all the recent bottlings, offers superb texture and stone-fruited depth without sacrificing the cut-diamond precision and citrusy, chalky energy that is a given from this area. In short, this is classic Larmandier – 100 per cent delicious and all class. This is a wine that is extremely versatile at the table, especially if served in a wine glass, and can even be decanted. It will pair with everything from fish, shellfish, terrines, any white meat dish, game and most cheeses (except blue or strong washed-rind).

Laherte Frères Blanc de Blancs Brut Nature NV
This super-mineral champagne is 100 per cent chardonnay from the family’s chalkiest soils in Chavot and Épernay. Both sites are biodynamically farmed. These vineyards are not only rich in chalk and chalky clay (marl) but there is also flint and schist. It’s the chalkiness, however, that drives the wine’s striking, racy, intensely saline minerality – that energy, freshness and zingy, citric line – while the clay content gives balancing fruit weight and texture.

Agrapart 7 Crus Brut NV
The name refers to the seven Côte des Blancs villages from which it derives: Avize (younger vines, 20–40 years), Cramant, Oger, Oiry, Avenay-Val-d’Or, Bergères-les-Vertus and Mardeuil. Like all Agrapart wines, the fruit is entirely from vineyards that are estate-owned and farmed. 7 Crus is always a blend of two different harvests – in this case 60 per cent is 2017 from 1er Cru vineyards, and 40 per cent is 2016 from Grand Cru sites, with this reserve wine raised in neutral, 600-litre oak casks. The varietal breakdown is 90 per cent chardonnay and 10 per cent pinot noir.

Suenen Blanc de Blancs Grand Cru Extra Brut NV
The vines for this champagne are all planted in Oiry’s compact, white Campanian chalk soils. From Le Champ Braux planted in 1955 to La Cocluette planted in 1987 and 1999, the average age of the vines is now 45 years. These vineyards lie at the base of the slope where only a little topsoil sits above hard, chalky bedrock. The combination of this chalk’s austere, mineral impact and Suenen’s low-yield/ripe fruit philosophy produces a scintillatingly tense, coiled and stony wine. “Tonic” is the word Suenen uses to refer to this wine’s unique personality. It’s a study in minerality – the wine is rocky, vibrant, saline and vibrantly fresh.