Produced by Broadsheet in partnership with Australian Cocktail Month

Four weeks, twelve cities, 145 bars – it’s time to book a date with your favourite drinking den. In partnership with Australian Cocktail Month, we highlight some faves. 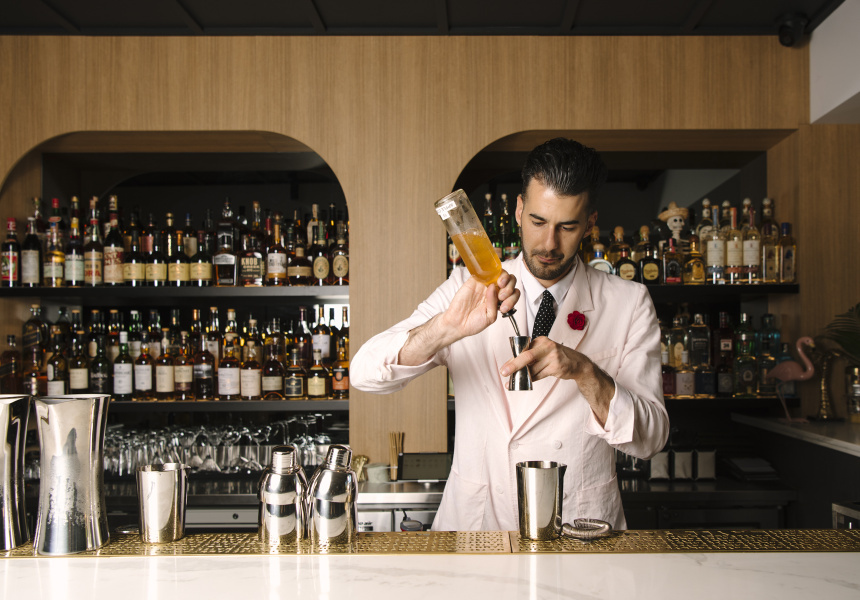 The past two years have been tough on drinking venues around the country. Thankfully, May marks the return of Australian Cocktail Month – a four-week celebration that promises to inject plenty of optimism into the hospitality sector.

This year, 145 bars across 12 cities around the country are taking part in the month-long campaign, which kicks off on May 1. Canny drinkers just need to buy a $20 ticket to access a specially curated menu featuring $14 cocktails and $10 low- and non-alcohol options at participating venues across the country.

Here’s just a small taste of the delicious cocktails on during Australian Cocktail Month – and where to get them.

Bibliotheca Bar and Book Exchange
Bibliotheca Bar and Book Exchange is a moody European-style establishment on Gresham Street in the Adelaide CBD. As the name suggests it’s a literature lover’s paradise, with bookshelves laden with hundreds of paperbacks, hardcovers and magazines that patrons are free to swap. It’s also the place for aficionados of fine spirits, with more than 100 premium whiskies and dozens of gins from all over the world in its collection.

During Australian Cocktail Month, Bibliotheca is serving up the Old Fashioned-inspired Dark Velvet, which features Balvenie 12-year-old Whisky and notes of chocolate, dry fruit and Black Forest cake. A lighter option is the Pink Velvet, a mix of Poor Tom’s Strawberry Gin, honey, a house-made shrub and a squeeze of fresh lime, while the Amber Velvet is Bibliotheca’s alcohol-free take on the classic Amaretto Sour.

Mr Goodbar
Since opening in 2016, Mr Goodbar has come to be regarded as one of Adelaide’s most esteemed establishments. Residing in a laneway just off Rundle Street, the bar’s wood panelling and red brick line an interior inspired by soul music and America’s Deep South. During Australian Cocktail Month you can access Oh Honey Honey – a sweet and fruity brew with a touch of smoke thanks to Glenfiddich 12-year-old single malt whisky – or the Plums a Plenty, with Feels Botanical’s Revel Eau De Vie grape spirit with ginseng, coffee and Illawarra plum.

Canvas Club
Set away from the bustle of the city in a heritage-listed building in Woolloongabba, Canvas Club has been serving up seasonal cocktails and tapas for more than a decade. The beer garden, lit with fairy lights and filled with greenery, is the perfect place to sip a Ginger Snap-Quiri, a brooding concoction that features Diplomatico rum, or an Umami-Tini, a flavour bomb featuring The West Winds Cutlass gin. Equally alluring is the Designated Delicious, thanks to gentle bitter orange notes courtesy of Lyre’s non-alcoholic Italian Spritz and a long, dry finish via the addition of grapefruit and sandalwood.

Savile Row
You’ll find this modern Fortitude Valley classic behind an unassuming orange door on Ann Street. Step inside and enter a glamorous speakeasy complete with a dazzling chandelier and shelves boasting 750 bottles of spirits. Upstairs seating overlooks the action in the bar below – the perfect perch on which to sip on a decadent Cherry Bomb – a “liquid Cherry Ripe” with Patron Reposado tequila and Fever-Tree ginger beer – or the Kount Kung Fu, a fruity number featuring Idle Hour vodka.

Pomelo
A rooftop venue known for its boozy slushies and seltzers and post-lockdown party vibe, Pomelo’s arrival in Melbourne’s bar scene in January was exactly the breath of fresh air we needed in 2022. For Australian Cocktail Month, Pomelo is offering That’s My Jam – a PBJ for grownups in a glass featuring Sheep Dog Peanut Butter Whisky – and the Feeling Fine, a botanical-laden frozen beverage with Feels Botanical Eau De Vie Bask and Saint Felix Bitter Citrus Aperitivo.

Maybe Sammy
A Rat Pack-inspired boozer that has picked up a slew of awards for its slick offering, Maybe Sammy always delivers a glam night out in Sydney. During Australian Cocktail Month, the award-winning bar has come up with the Up Up and Away – a Maybe Sammy twist on the Little Italy cocktail with mint, averna and Glenfiddich 12-year-old Whisky – and, in lieu of the classic Americano, the Stand Up And Fight, an aperitivo-style drink with local Hickson Road Australian Dry Gin, Bitter Campari, native lemon myrtle and a dash of tonic. If you want to skip the booze, opt for the Bee-Bom, an aromatic mix of rosemary and grapefruit with Lyre’s Dry London Spirit.

The Doss House
Located in the historic Rocks precinct, The Doss House is a subterranean whisky bar. The building – which has housed a boot maker, a boarding house and an opium dealer in its long history – dates from the 1840s and features exposed original sandstone walls. During Australian Cocktail Month, stop by for a Doss House special: Feels the Difference is a gimlet with a twist, with Feels Botanical Eau De Vie Bask – a very Australian spirit that features hemp, quandong and kakadu plum – and house-made lime cordial. Or try the Storm Chaser, one for whisky lovers, which features a zero-alcohol American Malt from Lyre’s and Fever-Tree Ginger Beer.

This article is produced by Broadsheet in partnership with Australian Cocktail Month.

Produced by Broadsheet in partnership with Australian Cocktail Month Learn more about partner content on Broadsheet.