The festive season brings a daunting variety of food options. So how do you know which drinks pair best with each dish? In partnership with Dan Murphy’s, Seb Costello from Bad Frankie shares his top matches for five essential Christmas dishes, from refreshing cocktails to an indulgent wine. Christmas is a time to embrace traditions, but that doesn’t mean you should rest on your laurels.

Seb Costello knows the importance of trying new things – it’s something he’s been doing ever since opening Bad Frankie in 2014. The Fitzroy bar specialises in Australian spirits, which have grown immensely in range and popularity over the past six years alone.

“When we started, there were about 80 Australian spirits and 20 distilleries,” says Costello, who’s also the head judge of the Australian Distilled Spirit Awards. “Now there are over 300 distilleries and well over 1000 products. It’s been pretty cool to watch the growth.”

Bad Frankie doesn’t just champion local spirits – it also champions other native ingredients on its cocktail list. So when it comes to pairing cocktails – or even a special bottle of wine – with iconic Christmas dishes, Costello is well-placed to show us the way.

What are punters generally buying this time of year? “All types of sparkling, but sparkling shiraz in particular, dry rosé and pinot grigio [are popular at Christmas],” says Dan Murphy’s wine merchant, Serena Monk. “It’s refreshing, crisp wines that fly off the shelves.”

Here are Costello’s tips for pairing your bevs to your Christmas lunch.

Prawns
A staple of many Christmas lunches, prawns provide a crisp, succulent starter before the meal kicks into full gear. That’s why Costello recommends pairing them with a fresh gin and tonic, served simply with a grapefruit wedge. He suggests Melbourne Gin Company’s Dry Gin mixed with Capi tonic water, a low-sugar tonic that complements and highlights the flavour of gin.

“It’s a really easy-drinking New World gin, with a bit grapefruit in there [already],” he says. “You’re having prawns at the start of your meal, and the bubbles with the gin will freshen your palate. It will excite your tastebuds.”

Ham
Costello suggests a Dry and Dry – the perfect low-alcohol drink as you tuck into the traditional Christmas ham. Keeping it local, he opts for Maidenii’s Classic Vermouth and Capi’s dry ginger ale (use about 85 millilitres and 240 millilitres, respectively) with a slice of orange.

“With ham, a lot of the rubs have a bit of spice in them, so we want to be mixing with those,” he says. “The ginger will lengthen the ham – ham is quite fatty and residual on your mouth, so it will help balance that. And you get these beautiful spices and aromatic notes from a Dry and Dry, because dry vermouth has a whole heap of aromatics in it.”

Roast vegetables
This one’s a bit more involved, but you can put your own spin on it. For the roast veg, Costello recommends a big, fruity punch that can be shared around. While he recommends the rum-and-citrus-driven Northern Rivers Punch from Shaun Byrne and Nick Tesar’s new book, Punch: Drinks to Make Friends With, you can hunt around online for a recipe that appeals to you.

“Punches are a great idea because you can make a fair bit and hand them around to your friends and family,” says Costello.

Mince pie
Costello advises pairing the spiced sweetness of mince pie with the fruity, delicate woodiness of St Agnes VSOP brandy from the fifth-generation South Australian distillery. It’s perfect for a classic Sidecar cocktail, especially when paired with a citrusy burst of Grand Marnier, some fresh lemon juice and sugar syrup, and shaken and served neat.

“The brandy will combine well with the brandy in most mince pies, and the lemon juice will cut down that sweetness,” he says. “So you’ve got that fruit-driven flavour with the oak in the brandy, and the citrus will give it a lighter, fresher feeling.”

Gingerbread
For dessert, Costello reaches for the most indulgent drink of the day: Hip Sip Muscat, a wine that’s so rich and sweet, you only need a small nip – about 30 millilitres or so.

“For me, gingerbread sweetness is all about not having heaps of it, having a smallish bit and really savouring it,” says Costello. “When I think about that, I think muscat. It’s this full-bodied bang in your mouth: delicious flavour that’s really sweet and decadent. Leave it in your mouth for as long as you like, and really just explore those flavours.”

This article is produced by Broadsheet in partnership with Dan Murphy's. Dan Murphy’s find the lowest prices then beat them – that's their lowest liquor price guarantee. Get it in time for Christmas! Dan's makes it easy to shop your way with express delivery, standard delivery and pick-up. Terms and conditions apply. See here for more details. 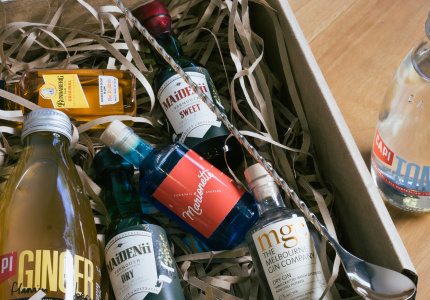