Future-Proof: Australia’s First Carbon-Neutral Whisky Is in the Works at an Off-Grid Distillery in Kinglake, Victoria

Designed to take advantage of its rugged bush surrounds, it’ll combine offsets and sustainable practices to neutralise its carbon footprint before the end of the year. Which makes these smoky, wild-fermented drams one of a kind. 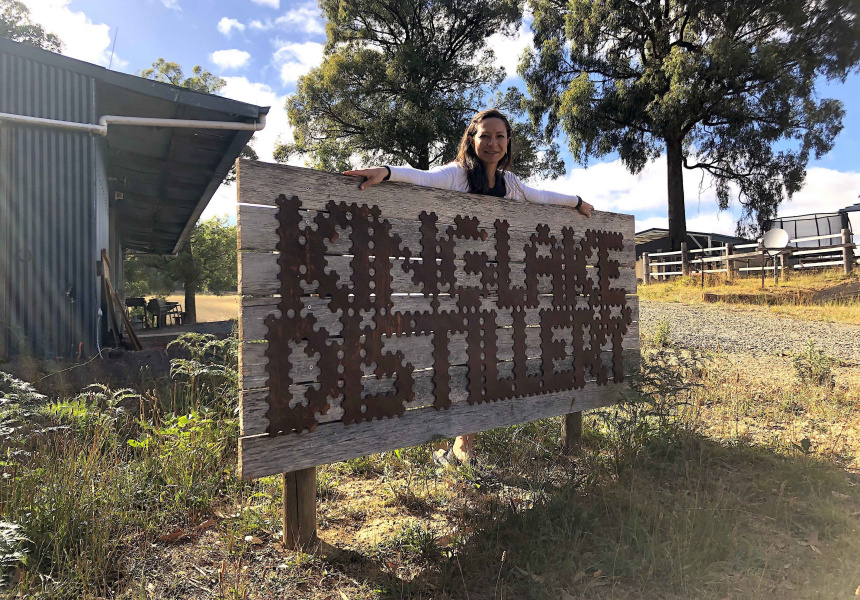 It’s fitting that Australia’s first carbon-neutral whisky is being made in Kinglake. The area, among rugged bushland just outside the Yarra Valley, saw thousands of hectares of towering eucalypts and native scrub razed to scorched earth in the deadliest and most destructive blaze of the Black Saturday bushfires in 2009. More than a decade later, the landscape continues to regenerate, but the indelible scars of climate-change remain.

Kinglake Distillery opened in 2018 and produced its first single-malt whisky that year. It’s one of a handful of Aussie spirit companies to run entirely off-grid – an impressive feat when you consider how much power it must take to boil a 2500-litre copper pot still with no mains electricity or water.

What’s more impressive, though, is the distillery’s commitment to producing Australia’s first government-certified carbon-neutral whisky before the end of the year.

“We’re not worried about being first, really,” says Chantal Daniels, a third generation Kinglaker who owns and runs the distillery with her partner, Sam Lowe. “Everyone should be doing this. A lot of people sit back and think it’s not possible for a distillery because it’s such an energy-sapping process. But yeah, it is possible.”

To qualify as a carbon-neutral certified business, the pair are implementing a green mix of solar, gas and generator power on their property. They’re also investing heavily in offsets and undergoing rigorous government auditing, and have set aside a nearby patch of land to rewild with a forest of native Australian plants.

While there are other businesses in Oz with this carbon-neutral certification (such as Tasmania’s Lark Distillery), Kinglake is also working at making Australia’s first government-certified carbon-neutral whisky – the double whammy. For their whisky to achieve the green tick, the distillery has to offset every grain, barrel, bottle, cork and packaging used.

“This is so much harder as it involves ensuring there are records from inception of the distillery. That’s almost impossible for long established distilleries such as Scottish ones ... You have to go back through and offset any carbon footprints they created from the very beginning in the process of making their whisky product,” says Daniels.

A drop of liquid luck hasn’t hurt the distillery either. “A spring actually pops up on the property, so we’re at the start of the stream,” says Daniels. “When we started looking at making whisky we got the water tested and it’s full of minerals – just like what the Scots have in their water.”

Kinglake uses its water source not only as a cooling agent in the distillation process but as the whisky’s base liquid, which imbues a uniquely Victorian flavour to the bottle. Minimal air pollution courtesy of the bush surrounds and Kinglake’s microclimate mean the whisky is left open to the “live pollens and yeast cruising around” to encourage wild fermentation, says Daniels.

Those hyperlocal elements bolster O’Grady’s Stand – a golden-orange-coloured single malt named for the original landholder, Ellen O’Grady, who was “dragged kicking and screaming from parliament, protesting that Kinglake should grow produce and not be hollowed out in the quest for gold”, she says.

But the heroes of O’Grady’s Stand are the three single-origin malts from Griffith in New South Wales, plus a heavily peated Scottish grain that packs a wallop of smoke. Small format ex-bourbon barrels re-coopered in Tasmania impart notes of vanilla as the whisky ages, and the distillery plans to experiment with native timber, cherry and mulberry casks.

“We didn’t want a clean spirit, so we’ve got the most down-sloping lyne arm on our still that we could possibly get, which helps to create that oily mouthfeel,” says Daniels. “We just work our whisky really hard.”

Daniels and Lowes are hardworking themselves – Lowes spent more than a decade running a world-class ski resort bar called Cafe Snesko in Val Thorens, France, before trading the French Alps for the wild, green slopes of the Great Dividing Range.

“You think every other distillery is out in the bush, or how you imagine a distillery should be,” says Daniels. “But it’s definitely our key difference.”

While O’Grady’s Stand isn’t technically carbon-neutral *yet, ultimate certification will apply retrospectively, encompassing all the distillery’s releases since its launch in 2018. It’s $100 for the 500-ml bottle.*