Opinion: The Free-Range Con – Why We’re Deliberately Misled About Chickens and Eggs (And Which Brands Are Ethically Raised)

Not sure about the difference between “organic”, “cage-free”, “pasture-raised” and “barn-laid”? You’re not alone. A new book by Sydney butcher Feather and Bone claims that poor labelling regulation in Australian Consumer Law has left the industry wide open to a confusing mess of misleading descriptions, making it easier for dodgy producers to be vague about their practices. Here’s how to find the good guys. 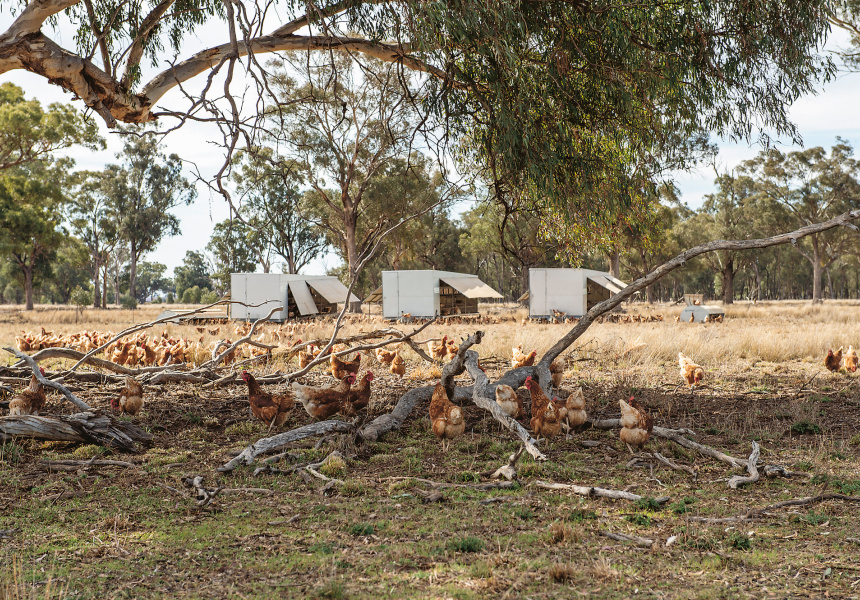 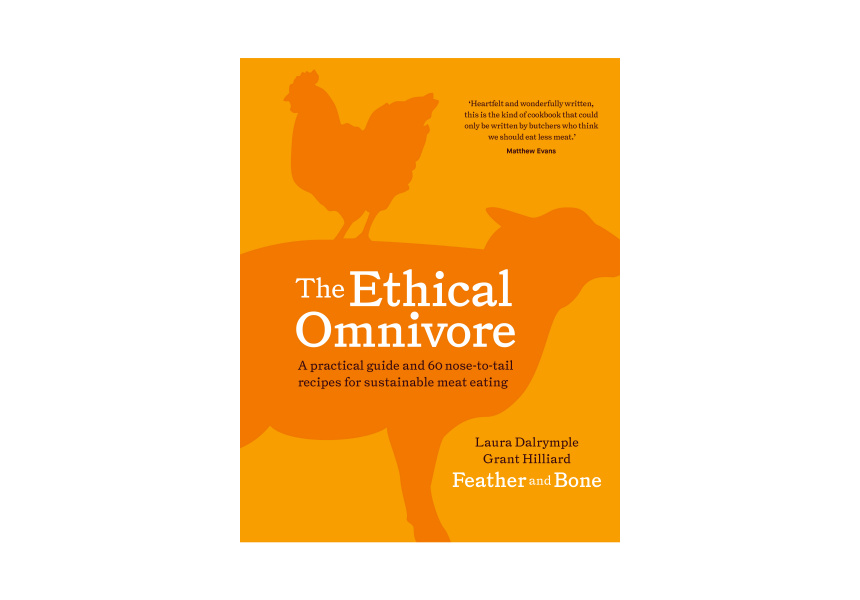 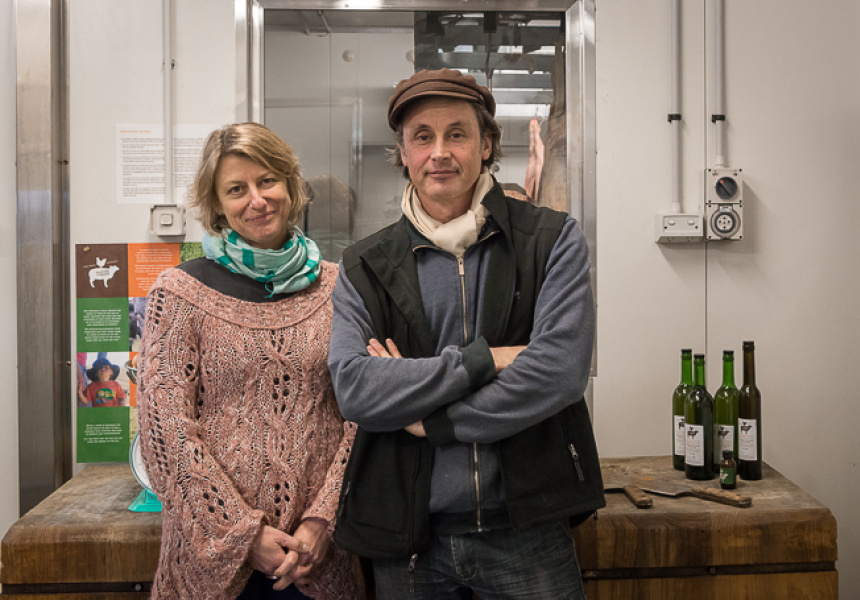 Any sensible person reading the words “free-range” on a box of eggs would envisage a flock of chickens ranging free outside on pasture. After all, you can’t range free inside a shed, can you? Well, as it turns out, under the current Australian Free-Range Egg Labelling Standard legislation, you can.

It all came about because consumers began to demand a better animal welfare standard to that of the caged-egg industry. This was a good thing for the farmers who were already growing egg chickens in a way that would accord with the average punter’s image of “free-range”– low stocking densities, mobile shelters and chickens moving at will across fresh pasture.

However, it wasn’t long before the large companies running intensive, caged-egg chicken operations that dominated the industry decided they wanted a piece of the free-range frittata, and soon the market was flooded with dubious product claims that couldn’t be easily verified by consumers and, lacking the clout of the big operators, the genuine free-range growers found themselves sorely disadvantaged. It became clear that industry self-regulation wasn’t working and that an independent standard was required.

After a long battle, during which the influence of the handful of dominant egg producers held sway, a Free-Range Egg Labelling Standard was legislated that allows for a permanent stocking density of 10,000 birds per hectare – 6.6 times the maximum of 1500 birds per hectare that the pasture-based egg growers proposed.

It’s true that there are doors on the sides of the fixed sheds at free-range certified egg farms that allow chickens access to the surrounding fields during daylight hours. And it’s true that 10,000 birds per hectare makes for a convincingly reasonable-sounding stocking density of one bird per square metre. But you’d only achieve that ratio if all the birds were spread out evenly across the combined shed and field area, and those 10,000 birds included thousands of intrepid explorers willing to brave the vast expanses of open, unprotected territory to reach the perimeter fence. There are no protective shepherds or sheep dogs to fend off foxes or raptors at these farms.

In practice, if the chickens’ food, water and nesting boxes are inside the shed, and if the area outside their shed doesn’t include shelter and compelling food prospects, then, while they may range a short distance outside, they don’t venture too far.

Instead, the majority of birds spend the majority of each day inside the shed, or within 10 metres or so of the shed, which gives you a real, constant stocking density of about 10 to 13 birds per square metre. Which would be tricky if they all decided to flap their wings at once.

There’s no doubt that this system is vastly preferable to caged-egg production in which birds are permanently housed in cages inside sheds, but the images suggested by the term “free-range” and the truth are substantially different.

By contrast, a “pasture-raised” chicken production system for both meat and egg-producing chickens is characterised by mobile roosting and laying shelters that are moved onto fresh pasture every few days. This prevents build-up of manure in any one location and distributes it across the pastures, turning the costly waste problem that occurs with fixed sheds into a free fertility boon for the pastures. Regularly moving to fresh pasture provides the chickens with constant fresh green pick, expanded foraging opportunities and new territories to explore, all of which translates into improved health and welfare outcomes.

The other issue is that chickens raised outside on pasture, responding to the seasons and permitted to behave according to their natural instincts, generally do not produce eggs as consistently as chickens that are housed in sheds. The urge to lay an egg is triggered by the pineal gland responding to light entering the eye, which is why producers use artificially lit sheds that maintain a consistent, optimum 16 hours of light.

But every intervention comes with a cost. Short-circuiting a chicken’s biological cycle and tricking her into laying every day produces a consistent supply of eggs, but it also prevents the chance to rest and recover, and reduces the overall productive life of the chicken.

Every time we buy something, we vote for the system that produced it.
In a marketplace that values volume, speed and price over quality, animal welfare and environmental impact, there is a compelling reason for egg producers to contain their chickens, despite the costs involved. And when consumers begin questioning the ethics of conventional, intensive production methods and search for different options, it’s not surprising that these same producers will do their darndest to dress up the so-called “free-range” standard as a vision of ecstatic, liberated chickens gambolling across verdant pastures.

Back at the supermarket shelf, there’s a deafening cacophony of labels trumpeting feel-good motherhood statements, but an eerie silence when you search for the facts that support the claims. As well as “free-range” there are a host of other egg claims to decipher – “organic”, “organic free-range”, “eco-organic free-range”, “free-range natural-living extra”, “natural-living free-range”, “nature’s intention”, “cage-free”, “cage-free liberty”, “corn-fed”, “barn-laid” and “pasture-raised”. What do they all actually mean? The only thing that’s abundantly clear is that this proliferation of appealing labels is a direct response to escalating consumer concern about animal and environmental welfare, and a lack of effective labelling regulation.

So, come back when you’ve separated the propaganda from the facts and you know exactly what all those terms really mean. You get double points if the people selling you the eggs can explain the difference between each label, and triple points if the producers themselves agree to let you onto their farm to see it for yourself. Our bet is that the retailers won’t know much more than you do, and large producers will fob you off with excuses about biosecurity risks. When we’ve finished de-mystifying egg labelling, we’ll start on meat chickens and work our way through the rest of the meat categories.

Fortunately for you and me, the birds and the landscape, a growing number of farmers are choosing the pastured model in which flocks of chickens genuinely range free on mixed pastures, moving with their mobile shelters every few days, and fertilising and improving the land as they go. In some cases, mixed farms use egg chickens to follow the pigs or cattle, because their industrious scratching and foraging helps to break down and scatter manure and keep insect populations in check. After the chooks, the pastures are left for long periods to allow the manure to break down into the soil and the vegetation to regenerate. It’s an ideal, time-worn agricultural practice of using animals to work on our behalf in a way that’s beneficial and productive for the entire system.

There’s no denying that it costs more to produce eggs this way, and the retail price can be off-putting to many. But you might decide that, on balance, you’d prefer to eat a few less eggs if it means that you can choose to eat eggs produced by vigorous, healthy, pasture-raised chickens in a system that adds fertility to the land, and provides a sustainable income for the farmer.

Or you might even decide to join a community garden with a flock of chickens, or get a few backyard hens of your own, reducing your household waste by recycling your kitchen scraps for a regular supply of delicious, fresh eggs. (The economics of egg farming only allow for consistent production, which means there are always lots of two-year-old, unemployed layer hens looking for a new home.)

Chickens are also excellent free labour when it comes to turning over garden beds – and good company when you’re hanging out the washing.

Chook brands and breeds
Look out for Sommerlad heritage chickens. They were created by Michael Sommerlad after he got fed up of working in the meat-chicken industry managing “standard broiler” birds with most of the chicken-ness bred out of them. The Sommerlad has a mix of breeds including Transylvanian Naked Necks, Indian Game, Plymouth Rock, Light Sussex and Aussie Game. (White Broiler chickens make up the vast majority of meat chickens in Australia). Also, look for organic certification or “pasture-raised” birds from local farms (birds grown outside, given medication-free feed and rotated regularly to fresh, chemical-free pasture).

Recommended egg brands
The most popular and common egg-chicken breed is Hyline Hybrid. We sell Working With Nature, Farmer Brown (find stockists here) and OxHill Organics. Look out for stocking densities of 1500 birds per acre or less, and for organic certification or “pasture-raised” eggs (birds grown outside, given medication-free feed and rotated regularly to fresh, chemical-free pasture). We’d love to see more variety in egg chickens, but other breeds aren’t as prolific so no one grows them.