Cooking Korean barbeque is an innately interactive dining experience that brings mates together. But if you can’t get out to an eatery at the moment, the experience can work just as well at home. In partnership with F. Whitlock & Sons, Andrew Kim from Seoul Soul shares some basic tips for pulling off your very own Korean barbeque, from meats and marinades to refreshing sides. 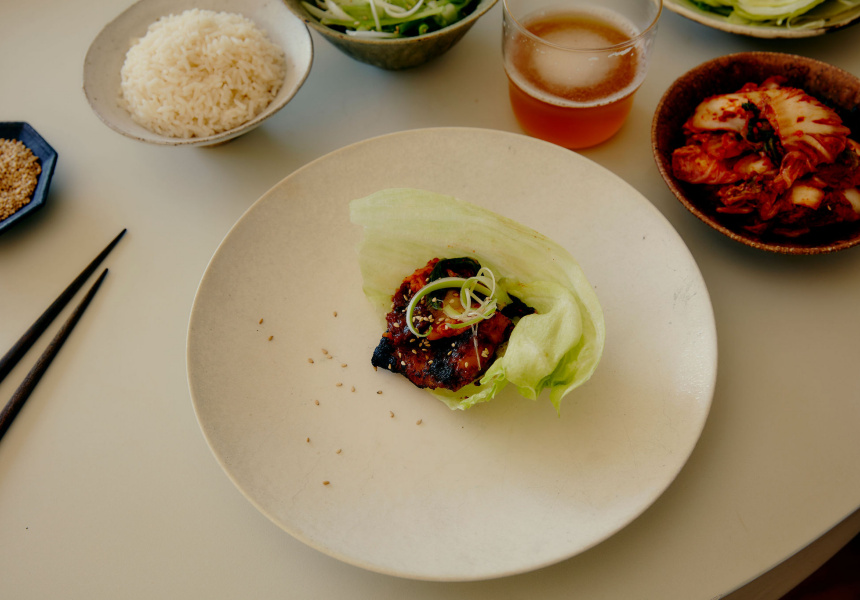 What’s the difference between Australian and Korean barbeque?

“There’s not a huge difference,” says Andrew Kim (also known as Insu Kim), who owns Seoul Soul across three locations in Melbourne, as well as other Korean eateries. “[But] the main one is we barbeque at the table and use lots of marinaded meat.”

You might not be able to wholly replicate that tabletop barbeque experience at home, but you can channel the casual, shareable vibe, sweet and spicy meat and complementary beers and sides. Kim, who helped launch an array of finish-at-home meal kits under the name Market Seoul Soul last year, knows just how to go about it.

Cook your meats in order
Beef and pork are most common in Korean barbecue, though chicken does sometimes make a cameo. “Normally we prefer Scotch fillet or meat on the bone, like ribs,” says Kim. “Then 80% of the pork is pork belly, and sometimes pork neck, which has less fat.”

Not all meat in Korean barbeque is marinaded, and it’s that non-marinaded meat that gets cooked first. From there it progresses gradually toward stronger flavours and richer marinades. “Normally we start with the beef and finish with the pork,” says Kim. “We start with the fresh, non-marinaded meat: something more tender and subtle in flavour, like a beef short rib or Scotch fillet. Then we move through the marinaded beef and the stronger flavours.”

Customise your marinades and spice level
Many Korean marinades are derived from either a chili paste called gochujang or a less spicy soy base. Sweetness and umami is key, thanks to the presence of ginger, brown sugar, and citrus elements. “It brings sweetness and saltiness,” says Kim. “Usually we put things like apple or kiwi or pear in there, and that citrus makes the meat really tender.”

You don’t have to make your own marinade. If you’re wary, or don’t have an abundance of ingredients on hand, a sauce like F. Whitlock & Sons Korean BBQ Style Marinade, featuring a blend of apple and pear with garlic, onion and chilli, is a flavoursome, versatile option. Whatever your predilection of flavour, just make sure you build in time for it to soak into the meat: “It can be three days or one hour,” says Kim.

Burn is better
An open flame is best, whether it’s your outdoor barbie or a handy hibachi. “We much prefer a charcoal barbeque or at least direct flame, like a gas fire rather than a flat grill,” says Kim. “Marinades have sugar or some sweetness in them, so when they burn it makes the flavour better.”

As for how long to cook the meat for, that depends on your preferred level of doneness. Kim suggests grilling the outside of the meat first to capture the juices, just like you would for an Aussie barbeque.

Prep your sides
Something to wrap the meat in is ideal. “Something like iceberg lettuce or sesame leaf,” says Kim. Also called Perilla leaves, the latter offers a similar scent to mint and apple. Combined with meat, some rice and a Korean dipping sauce like ssamjang (which combines fermented soybean paste and chilli paste, among other elements), those leaves make for instant street food-style gratification.

You could also look into pickling your own vegetables, kimchi-style, whether it’s cabbage, cucumber or radish – they add some stability to the table. “The pickled veggies balance out the oiliness of the meat,” says Kim.

Be sure to include your mates
Since Korean barbeque is a common component to the workweek – picture a weekly company function – as well as the family home, it’s very much social by nature. So when planning your own at home, tap your partner or housemates to get that same sort of vibe happening.

“It’s not about only food,” says Kim. “When we have a barbeque, that means we drink together and talk together. There’s a procedure. And it has an intimate atmosphere because there’s a fire in the middle. No one has a barbeque alone.”