Produced by Broadsheet in partnership with The French Dispatch.

The French Dispatch is now in cinemas, Wes Anderson’s latest film enchanting his fans with its typical mix of whimsical visuals and curious characters. In partnership with The French Dispatch, here are five cafes and restaurants around the country that will get you in the mood for a cinema session with one of filmmaking’s great modern auteurs. 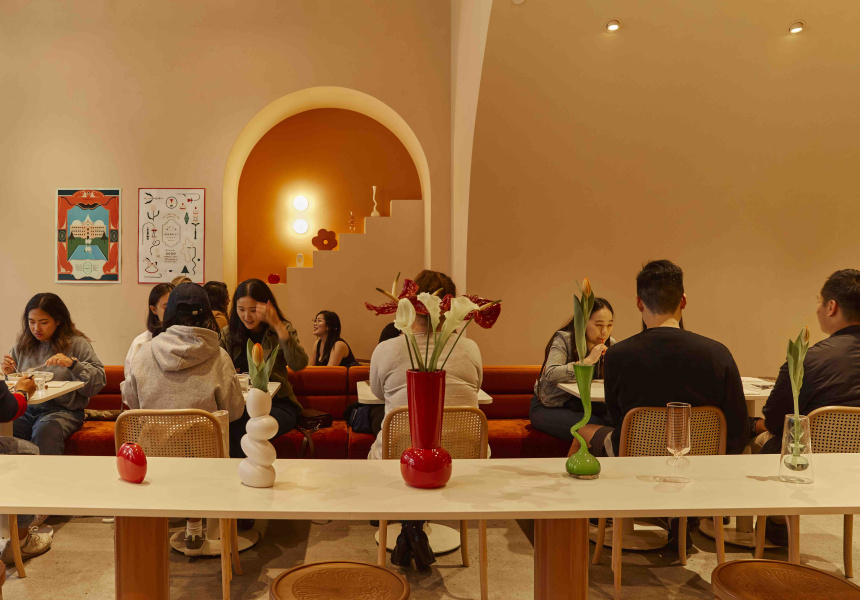 Wes Anderson’s films present worlds that people want to live in. Sharply stylised in a striking retro fashion, his focus on bright colours, flamboyant costumes, and settings packed with meticulous detail have made him a critical and commercial favourite for over two decades.

Taking in an Anderson film is a journey into a lovingly created, slightly surreal world. Off to see Anderson’s latest effort, The French Dispatch, and looking for a venue to keep the mood going? May we respectfully suggest the following cafes and restaurants around the country.

Budapest Cafe (Melbourne)
A salute to Wes Anderson’s Grand Budapest Hotel, Melbourne’s Budapest Cafe takes the bright palette, symmetrical stylings and eye-catching contrasts of its inspiration and creates a cosy charm all of its own. Swooping arches and stair-like accents give the space depth. You may not be brunching in the lobby of Anderson’s fictional hotel, but the feel is the same – as are some of the menu items, including a cream-puff tower inspired by the Grand Budapest Hotel’s courtesan au chocolat. Filled with vanilla, matcha and seasonal fruit custard, it comes in a similar Mendl’s-style pink box with a baby-blue bow.

The Grounds of the City (Sydney)
Wes Anderson’s always been fond of the pleasures of mid-century travel. The Darjeeling Limited, for instance, is centred on the titular train, a relic from the golden age of rail – which makes The Grounds of the City a dream come true for Anderson fans. Carefully crafted to resemble the interior of a classic dining car, it features intricate timber detailing, an antique fit-out, custom stained-glass windows, an authentic tea trolley, retro uniforms and a 1920s jazz soundtrack. The menu changes regularly – many of Anderson’s characters, adrift in their own personal turmoil, could no doubt relate.

Sammy Junior (Sydney)
As an American expat in Europe (he’s called Paris home for a few years now), Anderson’s last few films have focused on his adopted continent, serving up affectionate parodies of the old world’s enduring splendour. Sammy Junior’s pistachio-toned coffee-house feel could have come straight out of parts of The French Dispatch, especially once you settle into one of the green banquettes that line the back wall and order a signature coffee-infused cocktail.

Za Za Ta (Brisbane)
Not every venue with Victorian-inspired interiors captures the Wes Anderson vibe, but when you add in Persian carpet, velvet seating, vibrant colours and dashes of Queenslander architecture, you’re well on your way. The themed sections – including the Conservatory, Parlour, Library and 20-seat Grand Hall private dining area – build on the retro stylings to create a definitively Anderson-adjacent mood. An entirely vegetarian menu that draws heavily from Tel Aviv’s plant-based dining scene is the kind of detail his films delight in.

Pink Moon Saloon (Adelaide)
Looking like a tiny alpine hut that someone dropped into an Adelaide laneway, Pink Moon Saloon strikes exactly the right note of quirkiness and old-school functionality for an Anderson-themed evening out. The narrow, outdoorsy space you’ll find behind the blue door continues the theme: a dark, narrow bar leads to a surprisingly leafy courtyard, beyond which booths sit alongside a kitchen where a woodfire oven turns out tastily charred meat and vegetables. Coupled with a craft brew, it’s the perfect venue to discuss Anderson’s fondness for ’70s soundtracks and Futura-style fonts.

This story was produced by Broadsheet in partnership with The French Dispatch.

Produced by Broadsheet in partnership with The French Dispatch. Learn more about partner content on Broadsheet.