From coastal Mexican cooking by a skate park to a rebooted pioneer that puts the (biodynamic, estate-grown) wine first. It’s no secret that the eating – and wining, and surfing, and pretty much everything – in [Margaret River] is good, but in light of the current travel situation, the prospect of a south-west food-focused weekender seems especially appealing. For those plotting their next down-south getaway, here are some of the region’s newer dining arrivals worth considering.

Cullen BD Wine Room, Willyabrup
Is it a dining room? Is it a wine tasting space? It is a display home extolling the pleasures of biodynamic farming? Cullen’s rebadged restaurant – perhaps predictably – is all this and more. Like the restaurant at Leeuwin Estate, Vasse Felix, Voyager Estate and other pioneering Margaret River wineries, the Cullen BD Wine Room leads with its wine (biodynamic, alive) and the food (earthy, plant-based) follows suit. While the restaurant has shifted to a four-course set lunch menu, a properly excellent vineyard platter for two is available after 2pm and includes venison chorizo, house-made hummus and vegetables from the garden.

Toastface Grillah, Margaret River
“I don’t travel a lot these days,” says Toastface Grillah co-owner Alister Miles, “but every chance I get, I head down south to Margs.” We can understand the attraction, doubly so since Toastface Grillah set up its Margaret River outpost on the township’s main drag. In addition to the doner kebab-inspired Cappa Doner, porky Notorious PIG and Toastface’s other Wu-Tang and hip-hop-inspired toasted sandwiches, the cafe also carries cold-pressed juices from Margaret River juice company Livity and cakes and slices baked by gun local baker Nadia Haskell of Harlequin Dessert. (Haskell specialises in baking gluten-free, dairy-free and vegan desserts).

Farmer’s Kitchen, Busselton
Taking over the former Burger Bones site at The Shed Markets, this burger side project from Katie and James Taylor of Jindong Free Range Pork and chef Ben Moore is all about comfort dishes cooked with thoughtfully farmed produce. The burgers are made with grass-feed beef and dorper lambs from Dirty Clean Food; the pork in the tacos is the Taylors’ own (and the tortillas are made by La Tortilla in Perth); plus the – tallow-fried! – chips are cut from Manjimup potatoes. Open from lunch Thursday to Sunday and on Friday nights.

Norteña, Margaret River
After working his way through Margaret River kitchens including Voyager Estate, William Leigh spent six months travelling around Mexico and immersed himself in the country’s food. Back in Australia, he put everything he’s learned into Norteña, a pop-up at the skate park in Margaret River. By Leigh’s reckoning, northern Mexican is a better fit for WA on account of our wheat, cattle and coastlines – it’s a philosophy writ large via tacos made using house-made tortillas and salsas, nachos, and churros dusted in a lemon myrtle sugar.

Shelter Brewing Co, Busselton
Bigger is best at Busselton’s newest brewery. Floor-space and capacity aside – Shelter can house 650 guests – this new all-day brewpub and cafe at the Busselton Jetty is also thinking big in terms of sustainability (the venue has a serious solar power system that owners hope will supply up to 80 per cent of the brewery’s power), brewing (a canning line will soon be installed) and eats. Let’s all raise a middy to Shelter’s beer-friendly menu of crisp Roman-style pizza, ribs and chilli mussels. 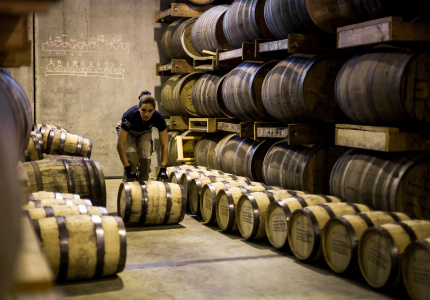