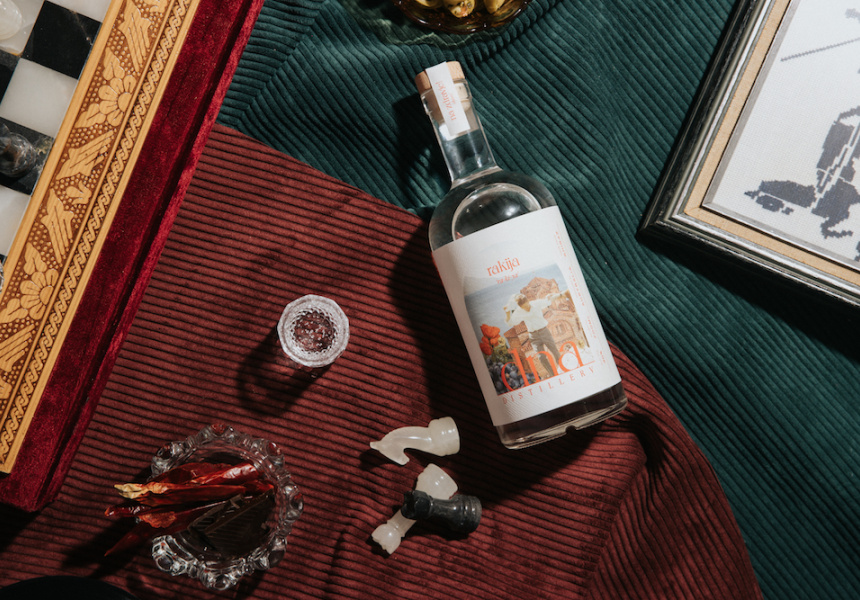 A McDonald’s restaurant might not be a conventional location for an all-important inaugural meeting about a potential business plan, but it’s where cousins Monique Sutevski and James Projcevski came up with the idea for DNA Distillery, Sydney’s first rakija (pronounced ra-ki-ya) distillery.

As first-generation Macedonian-Australians, preceded by five generations of rakija distillers, it’d be an understatement to say the pair grew up with the Balkan spirit. They recall how they use to watch their dedo (grandfather) ferment and distil his own batches in the backyard. But it turns out he wasn’t the first in the family to make rakija.

“We found out that five generations ago, our great-great-grandfather, who’s on my father’s side, made rakija for his village and people would walk from neighbouring villages just to buy off him,” Projcevski tells Broadsheet. “It turns also out that this included my mother’s family who lived in a different village. People from her family would walk to this village where my Dedo was, buy off him, and then take it back for their weddings.”

But what exactly is rakija? Projcevski explains while rakija shares similarities with other clear distilled spirits such as grappa, ouzo, arak and moonshine, certain nuances set them apart.

“They all come from the same beginnings 99 per cent of the time, which is grapes. If you take it to its most basic principle, rakija is a clear spirit with flavour in it,” he says. “For someone who’s never tried it, you can think a bit of like a gin. But whereas gin has a juniper berry flavour, the flavour of rakija comes from the fruit that you’re producing it from.”

DNA Distillery uses chemical-free, organic, hand-picked bold and full-bodied Australian shiraz grapes from the cool Hilltops region in southern New South Wales. The cousins stay true to their rakija-producing heritage by using their family recipe, which involves three weeks of natural fermentation to create a shiraz wine and then distilling twice for two weeks in a specialty still flown in from Poland.

“We want to keep everything as pure and clean as possible, as organic as if our great-great-grandparents from five generations ago were picking it from their farm and making it themselves,” says Projcevski.

DNA Distillery has produced two varieties: Classic and Gold. The classic is clear, delicate on the palate and has a crisp finish, while the gold is slightly richer, full-bodied and has a sweeter undertone.

Rakija is best enjoyed poured over ice or in a chilled glass and sipped slowly, advises Sutevski. She also encourages experimenting with it in cocktails, much like how the crew at Marrickville’s Baba’s Place is using it – try it as a rakija Sour, Marg or Cosmo.

The duo is already looking to create a rakija using pear for the next batch of what the cousins describe as “traditionally a grandmother’s drink”.

“Doing rakija is seasonal – it’s not like vodka or gin where you can make it all year-round, and you don’t have any issues in terms of supply,” Sutevski says. “Whereas … [rakija] being a traditional drink and something they made in the villages, they would make it from what was available to them, so we’re going to be doing second shiraz batch and doing a second gold, but are also trying out some different flavours.”