From wild juniper foraged on a pristine island and pepperberries hand-picked on mountain peaks, to bush tomato sourced from the middle of the Aussie desert, every gin on this list will hit the spot on a piping hot summer afternoon. 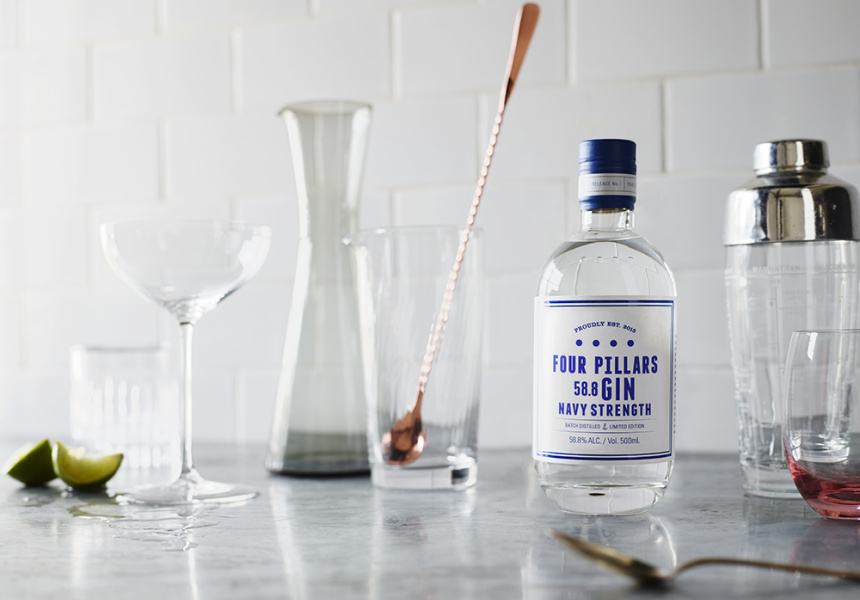 There’s nothing quite like an indigenous ingredient to give a locally crafted gin even more home-grown gravitas. And while a swathe of Aussie gin distillers is using native botanicals, these five are at the top of their game, producing fresh, bright spirits with balanced intensity, reminding us why nowhere else in the world tastes like Australia.

Every gin on this list will hit the spot on a piping hot summer afternoon. Just add tonic, a splash of soda and a good book.

Wild Gin by Kangaroo Island Spirits – $89 for 700ml
This small-batch South Australian gin fuses fruity and herbal notes with elements of citrus, sweet lime and mint. It’s made using wild native juniper that’s foraged at the distillery’s home base on Kangaroo Island, then combined with lime, ginger and coriander. It goes great in a G&T with a couple of peach slices and some fresh basil.

Mountain Gin by Mountain Distilling – $75 for 500ml
Between March and April each year, the lads behind Victoria’s Mountain Distilling head to the top of Mt Macedon to handpick wild pepperberries, which grow in the cool-climate forests of Victoria, Tasmania and New South Wales. The team also forages pine needles, and the combination of the two give the gin its floral, spice-driven notes. You can drink it at the cellar door, where it’s served as a cocktail with lime, grapefruit and maraschino liqueur; at home with a light tonic or sparkling mineral water and a slice of orange; or as a canned G&T.

Signature Dry Gin by Archie Rose – $79 for 700ml
The team at Sydney distillery and bar Archie Rose takes a juniper gin base and builds a subtle, layered flavour profile that includes blood lime, dorrigo pepperleaf, lemon myrtle and river mint. Each botanical is individually distilled in copper pots before they’re combined, which makes for a well-balanced spirit. Keep it in the freezer so it’s super-chilled and try it neat before mixing to truly appreciate the subtlety of the flavours.

Sydney Dry Gin by Poor Tom’s – $72 for 700ml
The crew at Poor Tom’s Gin, another Sydney distillery, didn’t set out to make an Australiana-themed gin – so they’re careful not to let the native botanicals in this clean, fresh and floral spirit dominate. Lemon myrtle is known for packing a punch, so it’s used with restraint, and strawberry gum leaf provides a sweet kick. “The emphasis is on a very classic gin backbone, and we’ve thrown in some other botanicals like juniper, coriander, cinnamon and cardamom,” says co-founder Griffin Bloomer, who has just launched a pre-mixed canned drink line called Love Can. “But it’s the strawberry gum that’s connecting it back to Sydney and expressing an Aussie way of life.” Serve with a little tonic, a splash of soda and a couple of strawberry halves.

Navy Strength Gin by Four Pillars – $90 for 500ml
Four Pillars head distiller Cameron Mackenzie is no stranger to using indigenous ingredients, but says it’s how you build those flavours that creates an award-winning blend. “Nowhere tastes like Australia,” says Mackenzie. “When we showcase our gin overseas, nine times out of ten the international distillers think we’ve doctored the botanicals. I liken what I do to standing over a pot in the kitchen, you keep throwing in the spices and add flavour until you get it right.” At Four Pillars’ distillery in Healesville, Victoria, Mackenzie zeroes in on the fresh notes of lemon myrtle and finger lime. The intensity of the lemon myrtle provides a big, bright citrus hit straight off the bat, with lime, coriander, cardamom and vanilla rounding out the journey.

The Cutlass by West Winds Gin – $79.99 for 700ml
The hero botanical in this gin is the kutjera, a native bush tomato that is related to the garden variety and grows in the arid sandy deserts of Central Australia. The kutjera in this gin is hand-picked near Alice Springs and transported to the West Winds distillery in Western Australia. Despite its name, the tomato flavour is not akin to that of a relish or something you’d serve with barbeque meats. Instead, The Cutlass is a bright, aromatic gin, with a fruity base, notes of coriander and ends a light peppery finish. Serve it ice-cold with slice of green capsicum or half a cherry tomato.