From Farmer’s Market to a Fabulous Cider Success Story

The secret to the cidery’s success lies in a willingness to experiment with flavour – and proximity to some of the world’s best apples. In partnership with Made With Care New Zealand, we speak to an ex-athlete on taking a punt on a cider he stumbled across at a farmer’s market. Nine years ago, Josh Townsend was at Matakana Village Farmer’s Market, around an hour north of Auckland, when he stopped by the stall of Zeffer Cider Co. A small-batch cider company started by winemaker Sam Whitmore and his partner Hannah Bower in 2008, Zeffer was producing its cider out of a shed in Matakana.

Townsend was hooked. “I thought it was so unique and such a high-quality product I was compelled to get onboard,” he says.

At the time, Townsend was no cider connoisseur. He was a professional rugby player nearing the end of his career due to injury. “I’d just gone through my fourth operation and was looking for a small business to get involved with to kick off my career outside of rugby,” says Townsend. “It just so happens I’m still there today.”

Townsend is now CEO of Zeffer Cider, which has risen to become one of New Zealand’s leading cider producers. In 2017, Zeffer moved its operations from Matakana to a new cidery in Hawke’s Bay, the largest apple-growing region in New Zealand. Possessing a mild climate, plentiful sunshine and fertile rolling hills, Hawke’s Bay is a beautiful region often described as New Zealand’s fruit bowl. “We grow fantastic apples here,” says Townsend. “I know Australia grows great apples, but we have brilliant apples for making cider.”

Zeffer uses locally grown culinary apples ideal for producing the brand’s signature “clean, new-age style of cider”, says Townsend. “These high-acid, high-sugar apples ferment really well into a clean, crisp cider – the style of cider we wanted to create – as opposed to traditional English-style cider apples, which are high-tannin, very rich apples. They make a delicious cider, but not the style we decided to focus on.”

A case in point is Zeffer’s Crisp Apple Cider, a “clean, fresh” cider with “strong apple notes” and “no faulty characters”, says Townsend. “It’s a big hit of fresh apple, and quite dry with no sugar additions.”

The brand has also developed a reputation for its willingness to push the envelope. “We always wanted to be a leader and showcase what cider can be,” says Townsend. “[We want to] offer something new for the category in New Zealand and Australia.” It’s an approach that has seen Zeffer explore infusions, adding apple and passionfruit, apple and cherry, and guava and lime lines to its range.

Those expressions are the result of brainstorming sessions by the cider-making team, led by head cider maker Jody Scott. The most promising flavour combinations undergo a commercial trial to “see if they’ll resonate with our fans”, says Townsend. So far, the infusion to make the biggest splash is the Apple Crumble Infused Cider, billed as tasting “exactly like freshly baked apple crumble and vanilla ice-cream”.

“The Apple Crumble started off as an exclusive cider for GABS [Craft Beer & Cider] Festival,” says Townsend. “It was so popular it won the People’s Choice Award, so we decided to take it to a commercial launch and now it’s our top-selling cider in New Zealand and Australia.”

The Zeffer cider-making process begins with the apples, which are crushed and added to the Hawke’s Bay cidery’s 600,000-litre stainless steel tanks, where they undergo a long, cool fermentation period. Once fermented, the apples are blended with different ingredients, depending on the style of cider: fresh apple juice for the sweet Crisp Apple Cider, cinnamon and vanilla for the Apple Crumble Infused Cider, or Hawke’s Bay raspberries and cherries for the brand-new Rosé Cider With Berry Infusion. The finished product is packaged on-site in the cidery’s bottling and canning facilities.

Zeffer also recently announced it was New Zealand’s first “zero carbon” cidery, through the obtaining of a Zero Carbon Business Operation Ekos Certificate for the 2020 financial year, thanks to initiatives like running zero waste events and a waste minimisation program, or using 100% recyclable packaging.

Despite the company’s remarkable growth over the last decade, Zeffer remains true to its small-batch origins. “A lot of cider producers use concentrates or other additives to make their cider,” he says. “We only used freshly crushed fruit in our cider. I think that shows through in the quality of our product. It’s what we believe a fresh New Zealand cider should be.” 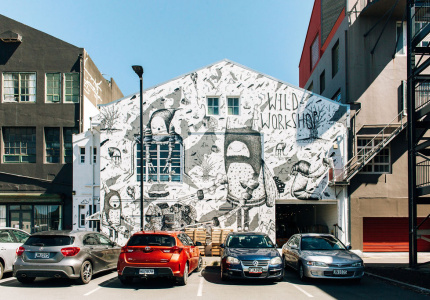 How a Craft Brewer From Wellington, New Zealand, Took Australia by Storm