Its meat is twice the size of an Angus, and marbled like Wagyu, with an earthy, nutty flavour. You’ll find it in one restaurant in the country, and even then only very occasionally. 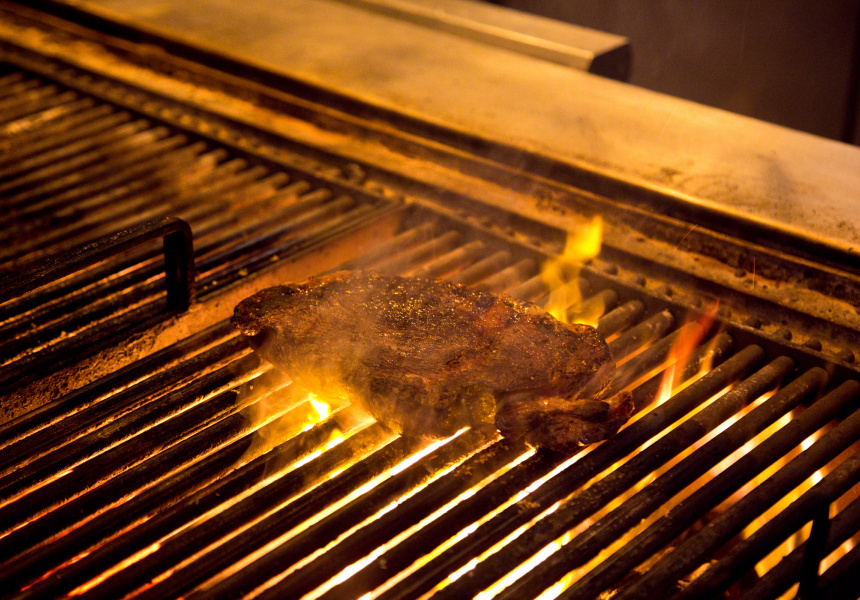 The first time Hunter St Hospitality culinary director and Rockpool Bar & Grill executive chef Corey Costelloe saw a Rubia Gallega carcass he was shocked at the size. “It was very striking – almost double the size of any other animal we have – like something from The Flintstones,” he says.

“To put it into perspective, a ready-to-butcher Angus is 350 kilograms. A Wagyu is much bigger; it’s 450 kilograms. The Rubia Gallega is 735 kilograms. Our butcher is a 40-year veteran and he said he’s never seen anything like it.”

Rubia Gallega (pronounced “roobeeyah gah-yeh-gah”) is a Spanish heritage breed from Galicia, a region on Spain’s north-western tip that borders Portugal, and is surrounded on two sides by the Atlantic Ocean. Bred as draught animals and for beef, the mahogany-coloured cattle are docile but incredibly strong.

“When the animal is alive, we worked out through ultrasound that its fat is liquid,” says David Blackmore, the fifth-generation farmer who pioneered Wagyu in Australia. “For 100 years they were breeding animals that could work the longest and recover the quickest. They reckon the marbling of fat in the muscle is liquid, not solid, so it can be converted to energy faster.”

For the last 10 years, Blackmore has been breeding Australia’s first and only herd of Rubia Gallega. The new herd is his retirement project while his son Ben runs the Fullblood Black Wagyu herd of 3500 cattle.

Because the animals are grass-fed, the resulting meat of a mature, 40-month-old Rubia Gallega is paler than the deep red of an Angus, and the fat is buttercup yellow.

“The chlorophyll in grass produces keratin, which makes the fat yellow. From a milking cow point of view, the same keratin is what makes butter yellow,” Blackmore says.

The size of the animal and colours of the muscle and fat piqued Costelloe’s curiosity, but he was dubious about the texture of such a massive animal. “When I saw it, I thought it was going to chew like an old boot, but I was very, very surprised. I absolutely loved it – the flavour, the texture. It’s quite milky, and more tender than Wagyu, Angus or any other breed,” Costelloe says.

“Neil Perry described Wagyu as having a buttery, caramel flavour. I’ve been asked to describe Rubia Gallega, and to me it’s more natural. It’s got an earthy, nutty flavour. And the texture is unbelievable,” Blackmore says.

The ageing process is essential to maximising Rubia Gallega’s natural tenderness, but because Blackmore has only sent Rockpool one carcass, Costelloe hasn’t tested the optimal time for ageing yet.

“We’ve only had one and we got it just before lockdown. Ideally, when you’re ageing something like a ribeye that has a lot of connective tissue and bone to protect the meat, you can do between 40 and 80 days. We started eating the Rubia Gallega around the 42-day mark. I would have liked to stretch it to 80 or even 100 days but lockdown happened, and we needed to eat it.”

Rockpool is the lucky recipient of the first Rubia Gallegas in Australia because of a long relationship with the Blackmore family, and because of the way the restaurant group uses the meat. “They are the only restaurant that has been taking a full carcass, dry ageing, then boning and putting every part of the carcass through the restaurant. It’s amazing and they’ve been doing it this way since Rockpool opened about 15 years ago,” says Blackmore.

That problem doesn’t exist with cattle breeds. Wagyu raised in Japan or Australia is still called Wagyu, and Rubia Gallega can be legitimately raised in Galicia or in the flats of the Goulburn River in Victoria’s High Country. But Blackmore says raising a Spanish breed in Australia is more authentic than it might seem.

“One of the things I couldn’t believe about Galicia was the number of eucalypts growing everywhere. They have a similar climate to the one we have at our Alexandra property, so I thought the cattle would adapt.”

It’s been a decade since Blackmore convinced Spanish breeders to sell him the genetics (ready for IVF transfer) for Rubia Gallega, and during that time he’s kept his project secret. He now has 17 animals in the paddock ready to go as Rockpool can use them, and he’ll continue increasing the size of the herd.

Rubia Gallega in Australia follows the rule that scarcity drives premium, particularly as the herd is still growing and animals are available at a slower rate than Blackmore’s eventual goal of 15 to 20 per month. He’s found the cattle have adapted well to the farm and are thriving.

“In a really fantastic year, they’ll have green grass up to their knees; all they’re doing is laying in the sun, chewing their cud, which is what cows are meant to do,” he says. “I expect we’ll be up to 250 cattle in two or three years.”

Where can I eat Rubia Gallega?
Rockpool Bar & Grill, Sydney, is currently the only restaurant in Australia where you can eat rubia gallega. It is on the menu now (November 19, 2021) for $105 for the rubia fillet, 200g, or $190 for the rubia sirloin, 450g. The meat is extremely limited and subject to availability.