Everything you need to know to enjoy this salty treasure of a mollusc – including why you should never swallow them whole. 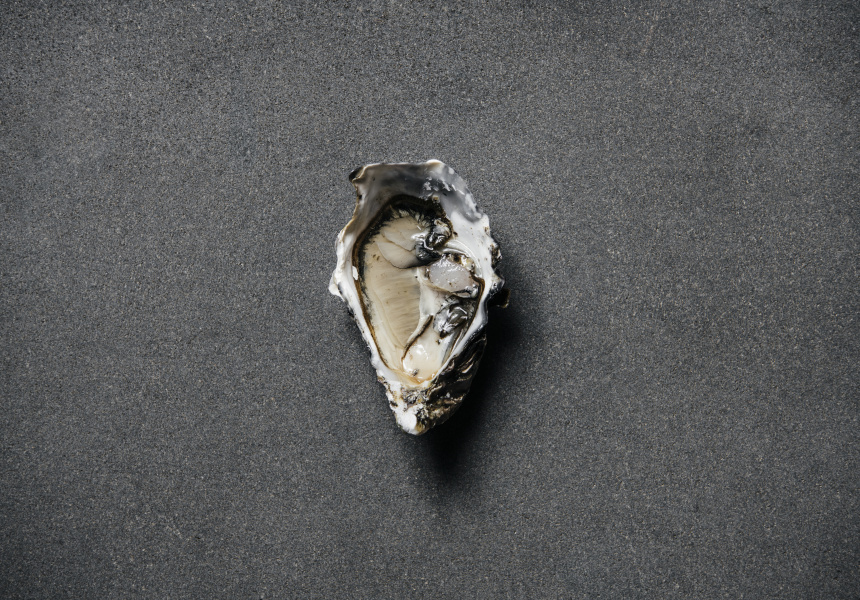 I have a small confession to make. After a lifetime of avoidance and utter disgust, I reluctantly slid back my very first oyster about 18 months ago. I’ll never forget it: a punchy, oceanic rush of complex yet familiar flavours, like diving into the sea. A food that I’d avoided my entire childhood suddenly made me feel like a kid splashing around the water.

I fell hook, line and sinker.

The subsequent months have taught me a few things about oysters. Namely that – like many of life’s sweeter things – they’re surrounded by plenty of misinformation. One such fallacy gave me reason to avoid them all those years, and that’s the myth that they must be swallowed whole, which is an idea many oyster veterans reject. So, to get things rolling, here’s rule number one: chew them before you swallow.

“The underlying core problem of why we don’t have a [strong] oyster culture in this country is because people have had that one-off [bad] experience,” says oyster farmer Steve Feletti. “That’s put them off for life.”

Feletti is the owner of Moonlight Flat, a popular oyster farm on an estuary off Batemans Bay, four hours south of Sydney. His oysters appear on menus at significant restaurants across Australia, including big-ticket venues such as Melbourne’s Vue de Monde and Kisumé, and Fred’s in Sydney.

Drawing on aquaculture methods from France and Japan, Feletti is on a mission to bring even more reverence to Australia’s oyster culture. The local industry is relatively robust, but he believes it isn’t living up to its full potential.

Reasons for this vary, Faletti says. They range from misconceptions (the swallow-whole myth) to issues around consumption and industry best practices. One big concern for Faletti is that unlike in France and other countries where it’s illegal to do so, a large portion of oysters in Australia are sold pre-shucked, which is a massive no-no, he says. Pre-shucking diminishes flavour and raises the risk of food poisoning.

Proof of this is in the bite. I’ve knocked back my fair share of pre-shucked market oysters over the last 18 months and I’ve survived, but there’s no comparing them to their restaurant counterparts, where chefs crack them open to order. Shuck timing can mean the difference between an adequate experience and the sublime.

He adds that, freshness aside, what you want to think about when you’re thinking about oysters is size. He points to another myth: that bigger equals more flavour.

It’s the opposite, Cheetham says. Cumulus offers three Moonlight Flat varieties (all versions of Sydney rock oyster, which is the smaller of the two main types consumed in Australia, the other being the Pacific) which he says are representative of the size-flavour dynamic. The Moonlight Kiss, the smallest option, is saltier and more intense than the Clair de Lune (medium) and Rusty Wire (large). Smaller oysters, Cheetham concludes, “pack a punch.”

Sydney rocks grow off Australia’s eastern coastline, while Pacifics tend to grow in cooler areas such as Tasmania and South Australia. Pacifics are usually larger than Sydney rock oysters, and tend to be plumper, milder and creamier. You’ve probably come across the ubiquitous Pacific via South Australian producer Coffin Bay Oysters, which can be found year-round at fishmongers and seafood markets across the country.

Though they’re available here year-round, oysters are in fact seasonal. You’ll find different varieties are best at different times of the year. Sydney rock oysters tend to peak between August and March, and Pacifics between April and September. Feletti says it boils down to location and spawning patterns, which are affected by water temperature, tides and weather.

The oyster-farming process begins when baby oysters find their way to a catching device called a “cultch”, which aquafarmers set out in anticipation of spawning. In Faletti’s case, he sets out a network of tray modules that float throughout his estuary – a method that allows the oysters to attract a fine layer of silk that produces naturally-occurring sea lettuce – on which they feed and grow.

From here, elements including climate, geography, hydraulics (the way freshwater and saltwater move throughout an estuary), depth and time will dictate the overall flavour profile of an oyster. Depending on the desired size, Feletti leaves his oysters in the water for around four months before harvesting them. (For context, a gargantuan 22-centimetre, 610-gram oyster recently found living off a pier in Manhattan was estimated to have been between seven and 15 years old). He says he can tell a lot about an oyster just by looking at its shell: “The beak, the barnacles, the weight, the colour, the shape. All these provide a forensic jigsaw about the oyster: its provenance, species, growth rates, age.”

Oysters are also pretty good for you. Molecular nutritionist Dr Emma Beckett says that one medium, uncooked oyster has about 173 kilojoules (the energy equivalent of a cup of raw carrots), is low in carbohydrates, high in vitamins C and B12, and a good source of iodine. And a single oyster will give you close to 15 per cent of your daily iron requirement.

The only downside is the salt level, says Beckett. A dozen oysters yields around 636 milligrams of sodium, which is more than one quarter of the maximum recommended daily requirement. So go easy (or don’t).

When it comes to wine pairing, Chris Ryan (head wine buyer at Cumulus Inc) says that as a general rule, oysters pair best with whites that are “crisp with a salty, saline quality.” He’ll often go for offbeat and local options, such as a 2018 Yetti and the Kokonut Beach sauvignin or 2018 Koerner Pigato Vermentino. Other classic parings include chablis or muscadet, which capture the pure fresh brininess of the molluscs.

Beer is also an acceptable pairing. Ryan recommends salty and tart varieties, such as Sailors Grave’s Down She Gose, which he describes as “the Muscadet of beers”.

Serving and preparation-wise, a purist would only serve oysters natural, on top of salt or ice (or in Cumulus’s case, a salty-ice emulsion) with a few wedges of lemon on the side.

“They’re pretty complex in flavour,” says Cheetham. “If you want to taste the true oyster, eat it by itself.”

With the exception of the Kilpatrick method (oysters topped with crisp bacon, Worcestershire sauce and barbeque sauce, then grilled), natural oysters are favoured in Australia. If you’re after cooked and flavoured oysters, look to Japanese versions – which are often baked, barbequed or fried. Or, if you’re at home, keep them raw and make a simple mignonette with white and red vinegar and finely chopped shallots.

Speaking of dining at home, one last rule: oysters must be eaten as quickly as possible after shucking. Of course, for those not carrying around an oyster knife, many markets and fishmongers will sell trays of oysters pre-shucked, such as Aptus Seafood at South Melbourne Market. But for reasons mentioned above, Feletti recommends buying a good oyster knife and learning how to shuck them yourself. Then you can ask your fishmonger for closed, live oysters and host happy hour at home.

Here are some of the best spots to eat oysters around Australia:

Brisbane
One Fish Two Fish
The Terrace by E’cco

This article first appeared on Broadsheet on March 19, 2019. Menu items may have changed since publication. Seaweed as Food: An Explainer