Dan Hong on the Art of Elevating Instant Ramen

You’ll never go back once you’ve made it like this. 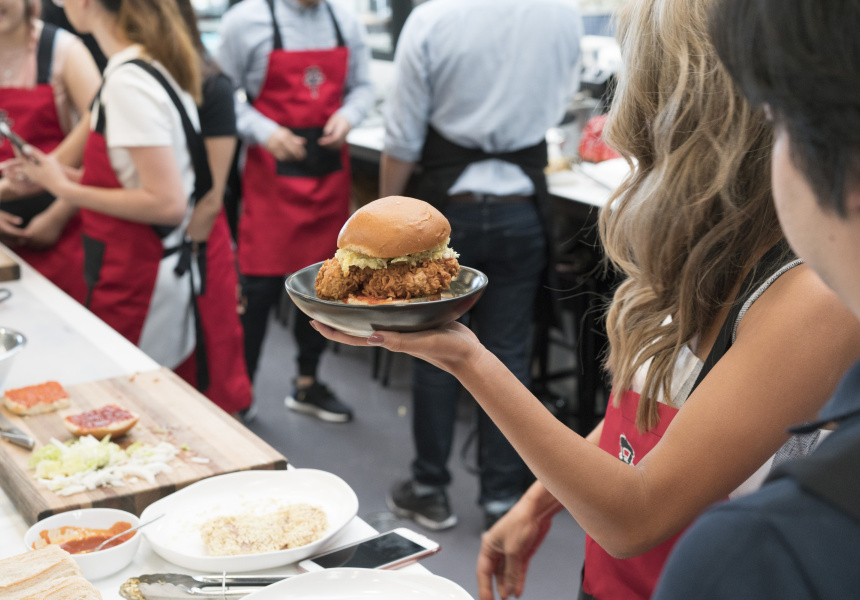 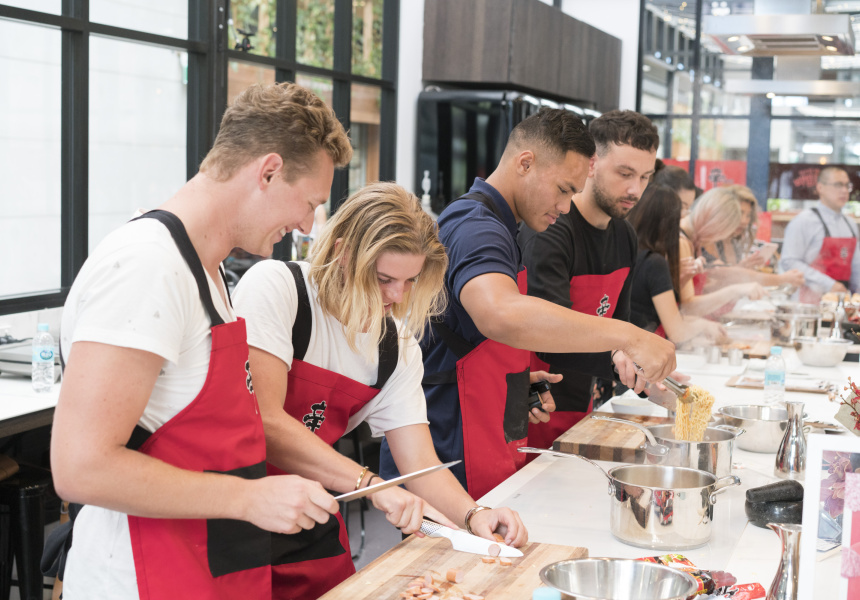 When David Chang gave cacio e pepe the instant-noodle treatment a few years ago, Italians were – by Chang’s own admission – “turning in their graves.” Now it’s chef Dan Hong’s turn to flip the script on a student staple: instant ramen.

We’re at a cooking class, being taught by Hong (of Sydney’s Mr Wong and Ms. Gs), to learn how to make the instant noodles more delicious. Nongshim (the Korean food and drink company hosting it) has enlisted Hong to teach it because if anyone can take instant noodles somewhere interesting, it’s him.

And because all of this is an effort to raise Nongshim’s profile, a bevy of social media influencers are assembled at Vive Cooking School in Rosebery.

Dressed in a pristine pair of Nikes and a light denim Maison Kitsune button-down, Hong plays the role of celebrity chef with style. When I ask him what he’s being paid, a crack appears in his Insta-polished veneer. “A fucken’ year’s worth of noodles, dude,” he says, tongue firmly in cheek. Whatever he's taking home, his genuine enthusiasm for the product is an exciting segue into the lesson.

We start with a basic ramen. Today we’re using the company’s classic Shin Ramyun. Hong boils a pot of water. “You want 300mls of water per brick of noodles,” he says. The noodles are dropped in. “I’m Asian, so there’s always fishballs floating around.” He slices four into perfect discs and tosses them in: “you can never overcook fishballs.”

The opposite is true of sum choy (often referred to as Chinese broccoli) , which sits alongside the included flavour sachets while Hong peels open two slices of processed cheese. “This is the good shit,” he says. Laying the cheese into the bottom of a deep bowl he drives home the point there is no substitute for plastic cheese. “When we pour the soup into the bowl, the cheese will melt into saucy little globules. Good cheese won’t do it.”

Thirty seconds before the noodles are done, the seasoning goes in with the greens. A quick stir and into the bowl. Some scallions and a generous garnish of coriander later, and we have a bowl of ramen that actually looks like the product on the packaging. The whole thing takes less than five minutes. The room lets out a collective gasp. We’ve been doing it wrong this whole time. “A perfect hangover cure,” says Hong.

A short coffee break follows, during which the managing director of Nongshim Australia approaches me. His name is Bill Hong (no relation) and he’s been busy capturing the event on his iPhone, much to the distress of his PR people.

“So, this Dan Hong guy,” he begins, addressing the only invitee with a triple-digit Instagram following, “is he really a big deal?”

I offer good evidence that he is in fact “a big deal”, but it is telling that Dan is considered obscure by Bill.

Characters like Dan Hong are ideal spokespeople to a generation raised on a divergent diet of MasterChef and KFC. Culinary outlaws carry serious clout, pissing off traditionalists and winning over millennials. So it makes perfect sense the next dish we prepare resembles a KFC classic.

Nongshim’s newest product, Mr. Bibim, is the reason we’re all here. It’s designed to be less soupy, with the Western market in mind, but Hong has a completely different plan for these noodles.

Both seasoning sachets are whisked into a small bowl of mayonnaise, producing a spicy kimchi aioli. Next up: chicken thighs marinated in soy sauce, sugar and vinegar before being crumbed in crushed noodles. Into the deep-fryer they go for five minutes. “You can shallow-fry these as well,” says Hong. “Make sure to use a lower temperature and a longer cooking time, though,” he cautions.

While the chicken’s cooking, we slice, finely, some Chinese cabbage and slather some milk buns with the aioli. When the fillets are golden and cooked through, they meet the cabbage in the bun and voila: Zinger a-la-Hong.

I join the influencers, who are outside taking pictures of their creations. I am no closer to being a chef than I was before this class, but I’m happy with what I’ve learned. Even in the hands of a total amateur, a bit of creativity goes a long way.