Dalgona – whipped instant coffee – is dominating Instagram right now. But as with so many of these viral food trends, it doesn’t taste nearly as good as it looks. So I decided to improve the recipe with real coffee. After several frustrating days and too many rounds of dirty dishes, I think I’ve cracked it. 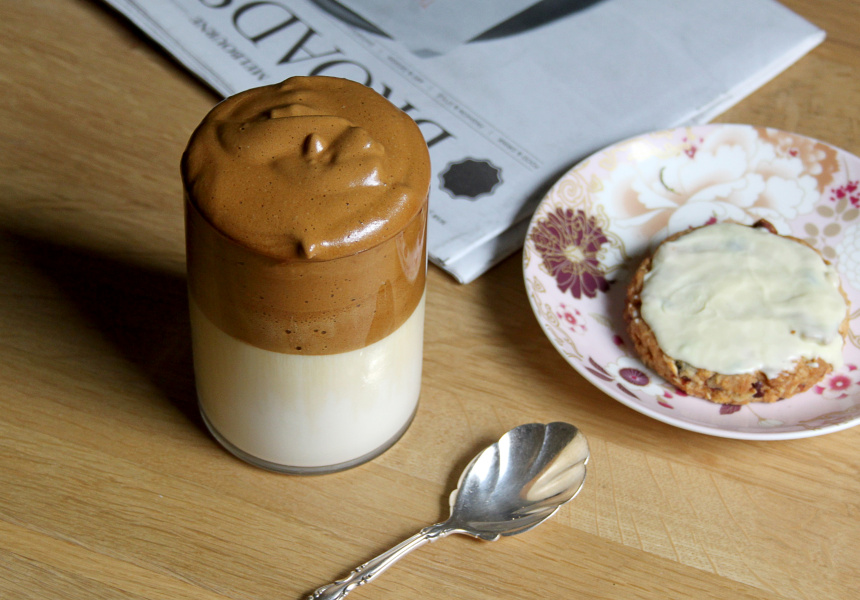 The popular version of dalgona, made with instant coffee "Italgona", an improved version made with Italian meringue

Here’s the thing about instant coffee: whether you add it to tiramisu, pour it over ice-cream or whip it into a luxuriant foam, it’s still instant coffee.

Brand-name instant is made with the cheapest, lowest-quality beans available, and they cop an absolute beating in the journey from green bean to shelf-stable granule. Instant is always going to taste like a poor imitation of the real thing, best suited to camp sites and student dorms.

Keep this in mind over the coming weeks, as you see more and more pillowy dalgona coffees appearing on Instagram. Indians and Pakistanis have long been whisking sugar, hot water and instant coffee together, then layering the resulting foam over hot milk, in a sort of reverse cappuccino.

The drink’s recent spike in popularity can be traced to South Korean actor Jung Il-woo. After being served a whipped coffee in Macau, he presented it on a TV show called Stars’ Top Recipe at Fun-Staurant in January, christening it “dalgona” for its likeness to a popular South Korean sweet of the same name.

Korean YouTubers began making their own dalgonas in late February. By the end of March it had become a global phenomenon, propelled largely by the millions of people stuck at home looking for small, easily achievable joys. Dalgona is perfect in this sense: it’s impossible to mess up and looks great every time.

To make it, you take equal parts instant coffee, hot water and sugar (two tablespoons of each, for example) and whisk together by hand or machine until it forms a thick, surprisingly robust foam. Pour or spoon the foam over hot or cold milk and you have dalgona, a coffee that looks great and tastes awful. It’s acrid, ridiculously sweet and, due to its thickness, lingers on your palate for much longer than a normal coffee. (For the record, I used Moccona, which three Broadsheet editors crowned the best brand of instant coffee in a blind taste test.)

I began wondering how I could make a whipped coffee I’d actually want to drink. Throughout this week, I became weirdly obsessed with it. My kitchen has never looked worse: literal splatters on the walls, coffee grounds dusted on every benchtop and tottering piles of sticky, discarded bowls in the sink. In the end I wasted about $40 on coffee, sugar and various emulsifying agents. Though I found success eventually, I regret – deeply – falling down the dalgona rabbit hole.

The first thing I learned is, there’s something special about instant coffee. You cannot simply whip coffee brewed in a moka pot, espresso machine, pod machine, Aeropress or any of that. Believe me – my electric mixer nearly died trying. Gosh, I was so naive back then (Monday).

Stumped, I turned to Google and found several theories already circulating in the coffee-geek community. One is that even instant coffee with “100 per cent coffee” written on the label, like Moccona, contains a small amount of soy lecithin emulsifier, which helps with whipping. Another is that instant coffee’s extreme dryness and concentration do the trick. Either way, it just seems to work.

Then I remembered that instant specialty coffee is a thing now. It uses beans of the same quality you’d find at your local cafe and treats them with a lot more care during the freeze-drying process. Apparently it’s quite decent. I checked in with St Ali and Proud Mary, the two roasters that I know of in my city (Melbourne) that make instant coffee. Both seemed to have sold out ages ago. Bugger.

Undeterred, I spent two days testing various emulsifiers, thickeners and stabilisers. Getting increasingly frustrated, I even called a professional: pastry chef Michael Baker, the co-owner of wine bar Henry Sugar and ice-creamery Kenny Lover. He previously worked at Alkimia, a one-Michelin-star restaurant in Barcelona, and also at the three-Michelin-star El Celler de Can Roca, the world’s foremost temple of science-y molecular gastronomy techniques.

He suggested I try a plant-based emulsifier called methylcellulose F50, which professional chefs use to make ice-cream and the like. But by the time we spoke, I’d become much too impatient for that. I wasn’t about to sit around waiting for some magic powder to arrive in the mail. I needed it now.

Of the things I was able to get immediately, some didn’t work at all (soy lecithin, aquafaba), while others worked partially but created thin, slimy foam (guar gum, powdered gelatine). Egg whites were the closest I got. Combined with a tablespoon of sugar and a cup of room-temperature stovetop coffee, they whisked nicely, producing a thick, stable, reasonably tasty foam, though not quite as thick and attractive as the instant-coffee version.

Hurrah! I’d done it. But I still had reservations. While Australia’s stringent food regulations make our eggs fairly safe and some bodybuilders like to eat them raw, there’s still a small risk of salmonella poisoning. I couldn’t very well send this recipe out into the world.

My wife, a talented home baker, suggested infusing Italian meringue (which uses cooked egg whites) with stovetop coffee. Baker shot this idea down, predicting the meringue would have a weak flavour and any attempt to bump it up with more coffee would ruin the meringue’s airy structure.

We decided to give it a shot anyway. And by “we”, I mean my wife. I was thoroughly over this whole endeavour, and out of my depth anyway.

Of course, after I’d spent three days failing, she nailed it on the first try with a thick, glossy, pale-brown meringue. As Baker predicted, it didn’t have the flavour intensity I was hoping for, but at least it was delicious, unlike its viral cousin. (Update: Baker later made up two recipes of his own and shared them with me.)

This recipe requires a cooking thermometer.

Combine the coffee and sugar in a pot and bring to boil, stirring constantly to dissolve the sugar.

Reduce the heat to medium. Using a clean pastry brush and mug of water, continuously brush down the insides of the pot to remove sugar crystals as they begin form.

Cook for about 10 minutes, until the syrup reaches 115°C.

Whisk the egg whites with the lemon juice (or cream of tartar) in an electric mixer set to medium, until soft peaks begin to form. Leave the syrup on the stove to continue heating as you do this.

Once the syrup reaches 121°C, increase the mixer speed to high. With the motor running, add the syrup to the egg whites in a slow, steady stream. Continue beating for 10–15 minutes, until fully incorporated and the meringue has a thick, shiny appearance.

Fill four glasses with milk (hot or cold) and add the meringue on top using a spoon or piping bag.