A Brief History of the Chicken Parmigiana

The combo of flattened chicken breast, ham, napoli sauce and melted cheese is a total pub classic. But who invented it? And how did it become so popular in Australia? 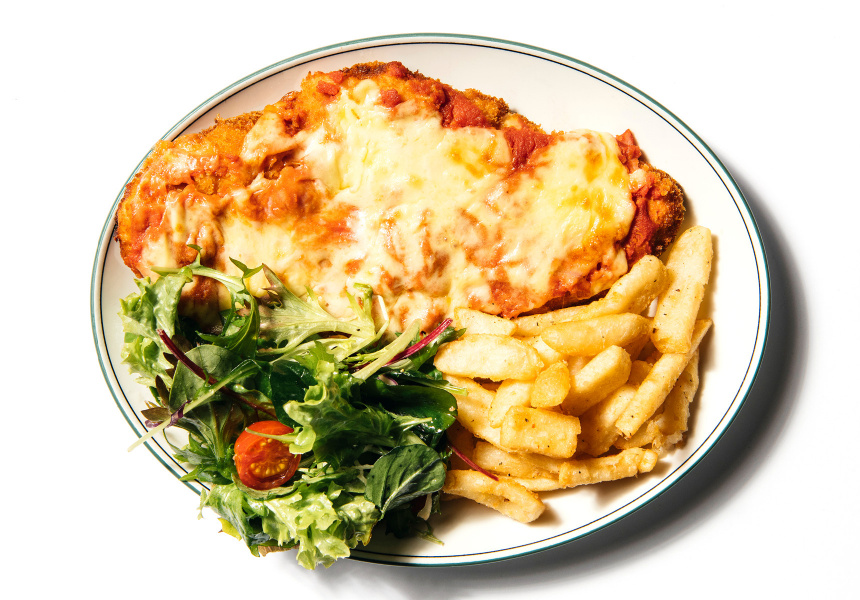 When a good chicken parmigiana hits the table it’s enough to make everyone pause. Melted cheese coloured dandelion-yellow to pie-crust brown. Bright-red napoli sauce and ham poking from underneath. Then the crisp crumbs, maybe a little charred, covering a juicy chicken breast. Free of gristle, bone and fuss. It all comes together in what’s maybe best described as a “hot mess”. But have you ever wondered who first created it?

Let’s get it out of the way: no one really knows. There was no chef running down main street yelling “Eureka!” after plating up the first chicken parmigiana. No single inventor, nor visionary. It just kind of happened over time.

The next thing we need to address is the correct abbreviation: “parma”, “parmi” (or even “parmie” or “parmy”). A snap poll of my friends in Victoria says “parma”. Except for those in Geelong, who apparently say “parmi”. Adelaide friends? Divided. Sydney friends? “Parmi”. According to a recent NT News poll (probably about as scientific as my own), 49 per cent of people say it’s “parma”, including Prime Minister Scott Morrison. For this story? Parma. My first was in Melbourne, and it’s forever a parma to me.

Jan O’Connell, author of A Timeline of Australian Food, says the original Italian version comes from the country’s southern region and is simply fried eggplant, tomato, cheese and basil. It has its roots in the 17th and 18th centuries. A veal version emerged in the early 1900s following mass Italian migration to the US (some four million people between 1890 and 1920). The earliest known reference to a chicken version, though, is in 1944, from the east coast US state of Maryland, south of New York and Philadelphia. Over there it’s known as “chicken parmesan” (shortened to “parm”) and is served with spaghetti rather than chips – something we can all agree is as bad as shortening the name to “parm”.

At roughly the same time, a similar dish appeared in Argentina, created at a restaurant called Napoli. Legend has it a regular diner came in late one night and ordered beef milanese (crumbed beef) with a side of chips. There was only one left, and an apprentice managed to burn its edges. Owner Joe Napoli was quick thinking enough to add ham, tomato and cheese, then dub it Milanese a la Napoli. That dish lives on in Argentina as beef or chicken, still served with chips and sometimes a fried egg. For what it’s worth, Napoli’s family say that story is only myth – that the dish evolved over several years at the restaurant, it wasn’t created in a single night.

Here in Australia, things happened much later. There was a recipe in the Weekly Times for chicken parmigiana in 1951, but O’Connell tells us it consisted of boiled chicken, rice and sultanas. Not quite the dish we know and love.

Food historian Dr Colin Bannerman (who, incidentally, is Canberra-based and uses both “parma” and “parmi” during our chat) says the first Australian mention of parmigiana he can find is the more traditional eggplant version in 1898. He theorises that eggplant dropped off the menu for Australians because it’s difficult to cook. From there veal (likely not milk-fed like Italian cattle) variations on cotoletta (crumbed meat) started appearing on menus. Then as chickens left backyards and entered commercial farms, things began to evolve.

“In the ’50s you had your chooks in the backyard and you lopped off their heads at Christmas time. In the ’60s and ’70s if you wanted chicken you went and bought a frozen chook. In the ’80s and the ’90s they started to appear cut down,” Bannerman explains. “Before then a hotel would have to think pretty seriously about offering any dish that required a boned chicken breast, and only an upmarket hotel with other dishes on the menu that would use up the rest of the chook could afford to do it.”

So when did the first chicken version appear on a menu in Australia? The earliest reference we’ve found is a 1953 edition of Adelaide newspaper The Mail, under the heading “Exotic Dishes”: “parmigiana … chicken cooked in light wine and served with grated cheese”. O’Connell cites another, from 1980, at now-closed restaurant Pimlico in Kew, an affluent suburb in Melbourne’s east. Chicken parmigiana was listed in a newspaper ad for the restaurant wedged in-between brains maison (house-made brains) and livers au vin (livers in wine) – two dishes that never quite made the jump to pub classic.

Stefano de Pieri, founder and chef at Stefano’s in Mildura, moved from Italy to Australia in 1974. He’s sure the parma was around in some form at the time, but couldn’t be exact. “It’s an improvement on the cotoletta,” he says, before correcting himself. “An improvement? A variation! The cotoletta has always been there and somebody said, ‘Bugger it, Aussies like pizzas, Americans like toppings, let’s top it up!’ Whoever invented it was bloody clever, because it’s certainly made an impact.”

At the Cheeky Pint, a pub in the Melbourne suburb of Footscray, expat Italian chef Massimo Spedaletti is proud of his parma, but it’s not something he’d make back in Italy. “In Italy we are a little bit stuck in classicity, which is cool but can play negative too. When you are too much classic you don’t see other things,” he says. “You can play with everything everywhere, but chicken parmigiana would probably be a no-go in Italy.”

While de Pieri thinks maybe the parma gets a little too much attention in Australia (“I don’t want to denigrate it, or glorify it. It’s already got its spot, it doesn’t need more limelight.”) he doesn’t agree completely with Spedaletti about putting it on menus in Italy. “Bloody oath I would if I had a restaurant in Italy,” he says. “I think the Italians would go for it immediately with absolutely no fear. The Italians are a bit more open than people imagine.”

Whatever you call it, whether you prefer chips on the side or the bottom (I’ll confess I love them on the bottom) or love an esoteric topping, there still doesn’t seem to be a clear timeline of the pub parmigiana in Australia. As to the lingering question of “why?” – it’s probably best summed up by O’Connell: “I guess people just like them?”