Shockingly, more than half of barramundi consumed in Australia come from overseas farms, with little transparency around how the fish are raised. Daintree Barramundi Farms in Far North Queensland is a true-blue operation keen to improve the situation. 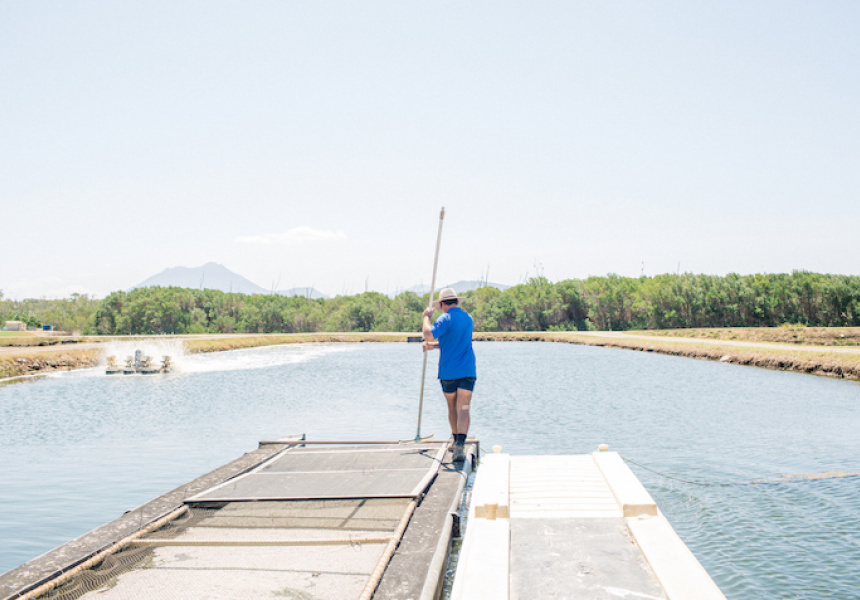 There’s an unusual calm to the swimming pool-sized body of water Mark Hober is standing beside. It’s filled with 1500 hungry barramundi, some up to a metre long, but at the moment the only thing disturbing the still turquoise water is the relentless motion of an aerating paddle.

A hand-welded contraption attached to the tray of a ute springs to noisy life on the far bank. Moments later thousands of feed pellets are strafed into the pond. There’s a near-instant explosion of movement, as though the machine were firing Mentos into a pool of Diet Coke. We stand together watching hundreds of fish leaping from the water to catch the spray of food.

“I used to drive past here on my way to work and I’d see the old guy who owned it feeding his fish,” Hober says, his akubra shielding his eyes from the Far North Queensland sun. “I’d think, ‘Gee, wouldn’t it be nice to manage a farm like that one day.’ Now that’s exactly what I do.”

Hober grew up in the area and has run Daintree Saltwater Barramundi Fish Farms for 17 years. But while he’s proudly seen the 49-hectare farm grow from a single pond to its current 14, he says the continued growth of the Australian industry is threatened by the prevalence of imported fish that are often misrepresented as local.

Data from the Australian Barramundi Farmers Association suggests fish farmed overseas, often produced without the same emphasis on sustainability and animal welfare as the Australian product, make up 60 per cent of the barramundi that ends up on our plates. And the problem is exacerbated by weak legislation. Only packaged seafood has to be labelled with its country of origin – a convenient loophole for unscrupulous wholesalers.

“The amount of seafood that’s brought into Australia and sold as ‘Australian’ because of our lack of labelling laws is very frustrating,” Hober says, raising his usually tempered tone. “Someone can sell something grown in a farm in Taiwan as Australian. What are those fish eating? How are they treated? What kind of water are they in?

“Nobody knows what they’re getting.”

Hober helps me flick a line into the recreational fishing pool at the front of the farm. The surface is still alive with the movement of hungry fish. These captives were once considered vastly inferior to their wild-caught counterparts, and were dismissed as muddy in flavour and less structured in texture. But the introduction of sustainable farming techniques, with focuses on water conservation, waste management and stricter biosecurity processes, has flipped this reputation. “Our water, our feed, our husbandry techniques – they produce the best,” Hober says.

Feed is a key advantage of farmed barramundi. Diet can be controlled and managed, with only 1.5 kilograms of food required to produce one kilogram of meat, compared to 15 to 25 kilograms for wild-caught fish. The 20,000 barra here, for example, eat pellets made in Brisbane from fishmeal, fish oil and a tailored mix of vitamins and minerals. I come to the self-preserving conclusion that it’s this premium diet keeping all the fish from taking my delicious bait.

Each barramundi begins its 12 to 18 month tenancy at the farm as an immature 12 to 15 gram “fingerling”. The young fish come from 100 kilometres away in batches of 12,000, as breeding fish is apparently a “whole other science”. From the fingerling nursery, through their graduation across the age-based ponds (the fish are kept with similarly weighted peers to prevent cannibalism), until they are dragged from their final pool with a large net and laid to rest in an ice slurry, Hober keeps a close eye on every aspect of his charges’ lives. Antibiotics are used only to save the life of a sick fish, and by law, hormones are also off the table. “We produce a small quantity of fish, relatively speaking, so we can look after everything ourselves,” he says. Humpty Doo farm in the Northern Territory, for example, turns out as much as 50 tonnes each week, compared to Daintree’s 100 tonnes a year.

Daintree, Humpty Doo and five other farms collectively make up the Australian Barramundi Farmers Association, which represents 95 per cent of the barramundi farmed in Australia (about 7000 tonnes per year). The organisation is petitioning the government to introduce stricter labelling laws. Even with competition from less-regulated overseas farms, Hober believes this kind of legislative intervention would help everyone. “They trialled proper labelling in Darwin and actually found that sales for wild-caught, farmed and imported increased across the board because everyone knew what they were buying,” he says. “It becomes an informed decision.”

But while Hober’s frustrations with government inaction and deceptive practices on the part of seafood wholesalers run deep (“they’re only in it for the profit”), his love for what he does goes to his core. Fishing is a longstanding hobby of his, stretching back to before he was involved in the industry professionally. “The passion for the job, the passion for the farm and the passion for the fish will keep me going,” he says, as my line continues to dangle limply in the still water.