Barcelona’s Disfrutar Wins the One to Watch Award 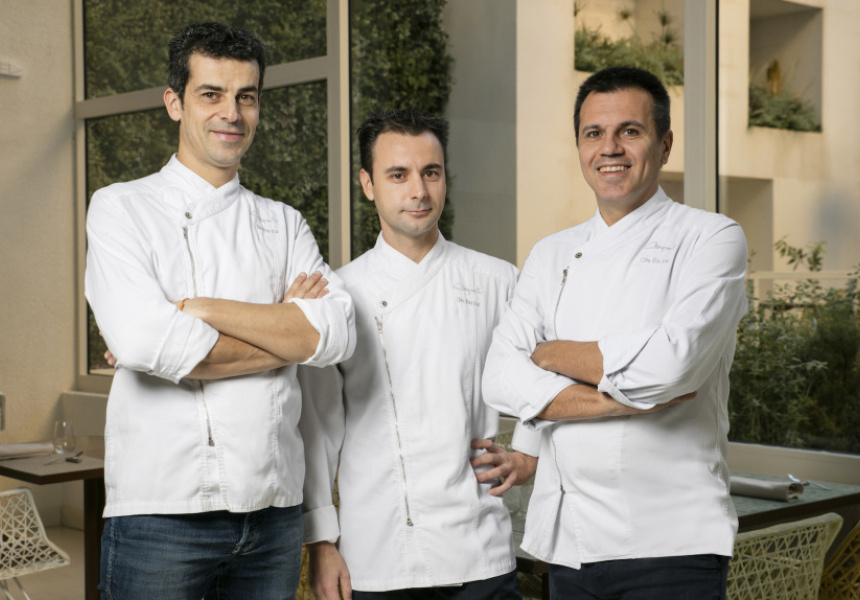 “Nowadays, to run a restaurant in Barcelona with 50 employees making creative cuisine for 50 people, you have to be a little loco.”

Eduard Xatruch, co-owner of Barcelona restaurant Disfrutar (“enjoy” in Catalan), has a point. At a time when so many physical and digital column centimetres are being dedicated to the health of “fine dining”, planting your flag in a city already well serviced by high-end restaurants – Barcelona boasts 23 Michelin-starred restaurants, more than any other city in Spain – seems questionable. But when you’re talking about a project helmed by three former head chefs at Ferran Adria’s legendary El Bulli, the logic doesn’t seem so flawed.

“For us it’s our life,” says Xatruch of the restaurant he opened in late 2014 together with former El Bulli high-ranking officers, Oriol Castro and Mateu Casañas. “When we opened it was a very difficult month. We have no other partners, but we put our heart into our project. We are very proud of the things we are making in the kitchen.”

It would seem the hard work has paid off, with Disfrutar being named by the World’s 50 Best Restaurants as the winner of the 2017 Miele One To Watch Award, given to a restaurant that judges believe has the potential to rise in future lists. Will Xatruch and his two business owners be able to emulate their mentor’s success? (El Bulli was named best restaurant a record five times.) Time, naturally, will be the only way to tell, but even from afar, Disfrutar appears to have much in common with Adria’s landmark restaurant.

The tasting menu-only format. The financially disastrous staff-to-diner ratio (in case you missed it earlier, the restaurant employs 50 people to feed 50 guests during each service). The focus on progressive cooking. Xatruch makes no secret about the influence working at El Bulli has had on the trio (the three worked together at El Bulli for 17 years) but says their time under Adria was about more than just learning how to use a new product or piece of equipment.

“Gastronomy was very different 10 years ago,” says Xatruch. “El Bulli opened a new way to understand gastronomy. Now you have hundreds and thousands of restaurants that have a little bit of El Bulli’s way of thinking. For us, When you feel and when you respect, cooking becomes free. It used to be that if you were a very good restaurant, you had to use caviar or a very fancy product. We learned you can do magic with simple things like potatoes or a sardine.”

Similar to El Bulli, a meal at Disfratur features a steady progression of small bites, somewhere in the ball park of 20 dishes served over three-and-a-half hours. Three different menus are offered to cater for first-time and regular diners. According to Xatruch, the kitchen needs to able to prepare around 100 dishes at any one time so it’s vital that the kitchen is able to constantly generate ideas. Teamwork is important to team Disfratur, not just from a creative point of view (Xatruch: “Six eyes, six hands, three brains. It’s not only one vision, but three visions and it’s better to work at the same time.”) but from a business perspective, too (the trio also runs a more casual restaurant, Compartir, in the seaside town of Cadaqués).

And what can diners expect from a visit to Disfratur? Like many restaurants of this calibre, Disfratur can lay claim to plenty of signature dishes: there’s tarta al whisky, a dessert where guests have whisky sprayed on their hands so the liquor’s distinctive aroma plays a central role in the dish; plus there’s a corn and foie gras tart that recasts the vegetable as a bank of spherified, kernel-like cells. It’s wild, Instagram-ready stuff but from a deliciousness perspective, my ears perk up the most when Xatruch talks about the panchino – warm, fried-to-order balls of bread that can be filled with caviar and sour cream or sea urchin – and an impossibly light savoury mille-feuille pastry made out of cheese. Despite a focus on progressive cooking, Xatruch insists deliciousness and harmony will always remain the kitchen’s focus.

“We don’t make dishes to make dishes,” he says. “We’d prefer to make one dish that’s good rather than a hundred dishes. It doesn’t matter how good a dish is, if there isn’t a good place to put the dish on the menu, we don’t put it on. A tasting menu is like a song. Different dishes are the notes of the song. And if you put them in a good order the song is fantastic, but if you change the notes the song is a disaster.”

Eaters, it would appear, like the tune they’re humming at Disfratur and want to hear more.