Her first product, Tumami, is made with only two ingredients and delivers a thwack of umami to your cooking. It’s all about shortcuts to add depth of flavour – and there are more jars on the way, including spicy, acidic and salty varieties. 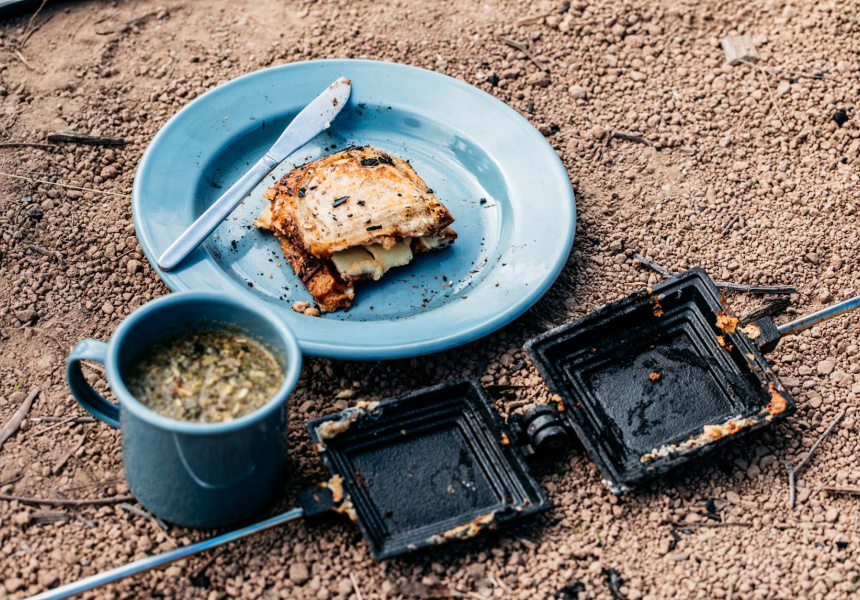 “My audience are people who love food,” she tells Broadsheet. “They aren’t necessarily people who love spending a lot of time in the kitchen – they want to get to Flavour Town real fast. These are shortcuts to get them there.”

Tumami, her “burgundy bombshell” spread, is made from just two ingredients – organic Aussie tomatoes and black garlic. It has the consistency of tomato paste but a deeper colour, thanks to the garlic.

It tastes as if salt has been added, but none has – it just packs a rich savoury-sweet flavour that’s perfect for adding a thwack of umami to your cooking. That could be soups, pizza, pasta, baked beans, aioli or mashed potatoes. (It could also work nicely with Julia Busuttil Nishimura’s take on the classic Maltese sandwich hobz biz-zejt.) “Tumami is our new kitchen bestie,” reads the jar.

Zaslavsky came to national prominence as a contestant on Masterchef Australia, but has since appeared on a number of other TV cooking shows as well as ABC radio. She’s written a couple of books, including the almost 500-page In Praise of Veg, which just won Illustrated Book of the Year at the Australian Book Industry Awards. By Alice is the next step in her career.

“It’s about teaching people they don’t need to cook hard – they just need to cook smart. This is about having condiments and additions [to your cooking arsenal] where all the hard work has been done – where you add a swish and everything tastes better,” Zaslavsky says.

And while she acknowledges that not everyone is a fan of jarred food, she believes it’s not all created equal. “You think about my mate Nat[’s What I Reckon] – there’s a real connotation that using jars is lazy. But I like to lean into lazy – I’m cool with lazy.

“You just need to look at the ingredients in those jars and ensure they have provenience and aren’t full of preservatives and additives. This is about doing the hard work at the front end of the shop [rather than when you’re cooking],” she says.

While Tumami is a shortcut to umami, the By Alice range will also fulfil a variety of other taste sensations. “There’s going to be an acid, something spicy and something salty. They’re all as plant-forward as possible. So it might be an anchovy paste, but it won’t be full of anchovy. I’m not plant-based, but I just think that’s the future.”

And like Tumami, they will be limited edition. “The only Australian organic tomato grower in the country gave me some of their tomatoes. Once it’s done, it’s done. It will be seasonal. If I can’t find the best, I just won’t make it,” says Zaslavsky.

By Alice is stocked in specialist grocers nationally. Find a list here. Four Wine Varietals To Take to Any Dinner Party